What: Intolerance-friendly brunch options with a twist

I suspect what prevented me from venturing to Kines sooner, despite all the rave reviews I’d heard, was the fact that Sydney Road is incredibly hard to get to if you live on the other side of Lygon Street and don’t drive or ride – three criteria I happen to meet. I took two buses there once and it ate up 45 minutes – an injustice when you consider how an Uber would only set you back a mere seven minutes and $6. I could walk, I suppose, but moving from place to place by foot has lost its lustre since my FitBit broke – do the steps even count if no one is counting them for you? But as soon as brunch club was due for a catch-up, I suggested Kines because I knew my trusty neighbours Eco Warrior and Grumpelstiltskin would be driving.

Located in an old shoe warehouse tucked away in an industrial corner of Brunswick, Kines is an interesting space. It has an expansive courtyard out the front and what looks like a spacious indoor area, except inside it shares quarters with a pop-up shop and a furniture workshop. If you’re in a big group like we were, you’d be best off sitting on one of the long tables in the front courtyard. We didn’t encounter any difficulty finding a table, despite the seven of us having the temerity to show up at a Melbourne café on a Sunday morning.

For once, I hadn’t checked out the menu beforehand and marvelled at how much variety there was to be found. If I were to hone in on one overarching influence on the menu, I’d say South American due to the ubiquitous presence of arepas – a palm-sized savoury cornbread cake – but that would be discounting the incorporation of kimchi, labne, harissa and cold soba into many of the dishes. It was an eclectic menu, but I knew my intolerances would narrow the selection down.

Kines isn’t a café that markets itself as catering to dietary requirements, but it inadvertently does a good job of it. Toasties and most dishes can be prepared with gluten-free bread, arepa and vegan cheese, while vegetarians will find most things are plant-based – the only meat items I could find on the menu were bacon and ‘cold beef cheek’, and they were only present in a few of the dishes.

I was so very tempted to get an arepa toastie with vegan cheese because toasties are a no-go zone for me usually, but I went instead for the ‘Sonido! Arepa’ after the waitstaff reassured me that it did not contain any onion and garlic. The Sonido! Arepa came with free-range harissa scrambled eggs, blistered cherry tomatoes, feta, greens and spring onion oil. Each dish at Kines has a few add-ons you can tack on to your dish, so I went for fermented chilli on the side. Conflicted Pescatarian and Grumpelstiltskin also got the same dish; the former got his with pickled jalapenos and the latter opted for the Sonido! Arepa as is. 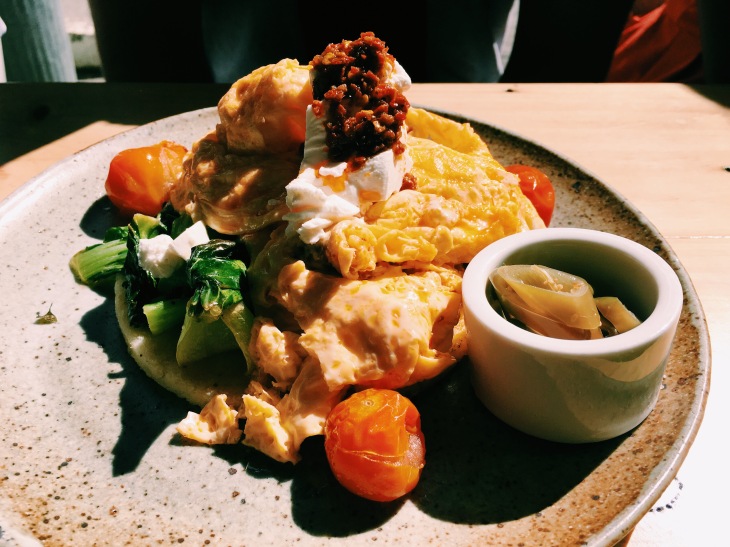 I was bowled away by this dish. I don’t typically order scrambled eggs when out because the amount of milk they are prepared with usually upsets my tummy, but after taking two Lacteeze pills as a precautionary measure, I found these scrambled eggs didn’t leave any undesired aftereffects. The eggs themselves were fluffy, generously proportioned and topped with a mountain of creamy feta and spicy harissa – a combination of flavours that I’d never had before but that worked incredibly well. The two round arepas at the bottom were thin, crisp and a great complement to the eggs, although Grumpelstiltskin thought there should have been more of them to go with the huge serving of eggs. My fermented chilli was suitably spicy and I lathered it across my dish. It was a big serving, but Conflicted Pescatarian and I encountered no difficulties finishing it.

Eco Warrior ordered the ‘O.G. Beet Sandwich’, which was a highly elaborate open spelt sourdough sandwich with pickled beetroot, citrus greens, caramelised nashi pear, goats cheese and fresh radish. Eco Warrior ordered bacon on the side, although what came out weren’t mere bacon rashers but a bacon steak itself. The pickled beets and goats cheese took centrestage in this dish, and Eco Warrior found the more unusual presence of pear worked well.

Resident Photographer and Mister Fantastic both ordered the ‘eggs in a bowl’, which true to name were folded eggs in a bowl accompanied by smoked paprika broccoli, parmesan, spring onion, harissa, lentils and quinoa. Resident Photographer struggles to enjoy brunch without the presence of toast, and so added some to his dish for an extra $2. Both of them enjoyed their choice, noting that the broccoli was pleasantly cheesy without being overwhelming and that they felt sated after their meals.

New Northsider, who recently migrated from Elwood to Northcote, ordered the bacon sandwich with tomatoes, fresh greens, aioli, fior di latte and balsamic caramelised onions (I shudder typing that) on spelt sourdough with free-range egg scram on the side. I heard no complaints from him, which made for a unanimously positive brunch experience.

The prices at Kines were pretty standard at between $16 and $22 if you add a side, but I found the value of these dishes outstripped those of brunch dishes elsewhere. I was full until dinnertime – rare if you’re me – and the sheer variety of ingredients presented on the plate justified the spend.

Don’t let inaction stop you from going to Kines as it did me – it’ll be one of the best brunches you have in Melbourne. If you’re addled with intolerances, know they’ll do everything in their control to ensure you escape with zero bloats.

Kines is open from 7am to 3pm Monday to Friday and from 8am to 4pm Saturday to Sunday.