What: The only lasagne that Mr WFYB will eat – a butter chicken lasagne

I was invited to dine as a guest of Fork & Fingers, but all opinions expressed are entirely my own.

I famously refrain from eating any Indian food in Melbourne that isn’t prepared by my mum because it’s never worth the five bloats after. There are exceptions, of course – Punjabi Curry Café in Collingwood and Madras Brothers in Fitzroy, to name a few – but as a rule, it’s best off for my high expectations and my gut if the onion and garlic-laden marinades and gluten-heavy naan and rotis are avoided. That is until I came to know about Fork & Fingers.

Fork & Fingers is an Indian fusion restaurant, with a seasonal menu that is rejigged every few months on the back of experimentation nights with regular diners to gauge what works and what doesn’t. The word ‘fusion’, especially in the context of ‘ethnic food’, immediately conjures up the thought of blasphemous combinations such as sushi doughnuts, phorittos, cheeseburger dumplings, ramen burgers and Italian yum cha but Fork & Fingers is much more considered in its approach. The flavour profiles of disparate cuisines aren’t haphazardly combined for the sake of it – numerous iterations and a genuine respect for the cuisines the restaurant is working with culminate in inventive dishes that seamlessly marry, for instance, India’s butter chicken with Italy’s lasagne without detracting from the essence of either.

A melting pot of different influences, Fork & Fingers’ dedication to constantly reinventing Indian dishes is mirrored in its interiors. The first mural Fork & Fingers ever commissioned, that takes centrestage against a large brick wall, is a portrait of Indian actress Madhubala from the iconic Bollywood film Mughal-e-Azam. While Madhubala was hailed as India’s very own Marilyn Monroe, a mural of the actual Marilyn Monroe sits on the wall against the cash register. Not that it’s the Marilyn we’re used to – this one wears huge ornamental earrings, loose Punjabi suit pants and sandals.

As is commonplace with Indian restaurants, we were served pappadums with an accompanying pudina (mint) sauce. These pappadums were thin, crisp and moreish and the pudina had hints of yoghurt and sugar, giving it a smooth texture and a tinge of sweetness.

Soon after, we had another common Indian entrée: paani puri. Little parcels of puff pastry were filled with diced chickpeas, potatoes and pomegranates – the third ingredient a somewhat unusual one in paani puri. The puri sat atop a shot glass of tamarind chutney and flavoured water. The convivial Ishupal, who helps run the restaurant alongside his sister Rohini and her husband Satinderpreet, advised us to either eat the puri and then drink the shot of tamarind water, or as I usually do, pour the water into the puri and then gobble it up in one big mouthful. Mama WFYB did neither and committed the fatal mistake of trying to eat her paani puri in two mouthfuls; the inner contents of her puff pastry shell scattered across her plate as she looked mournfully on. The tart yet sweet tamarind water was a natural accomplice to the crunch of the puff pastry and diced vegetables – this was one of the best paani puris I’d had. 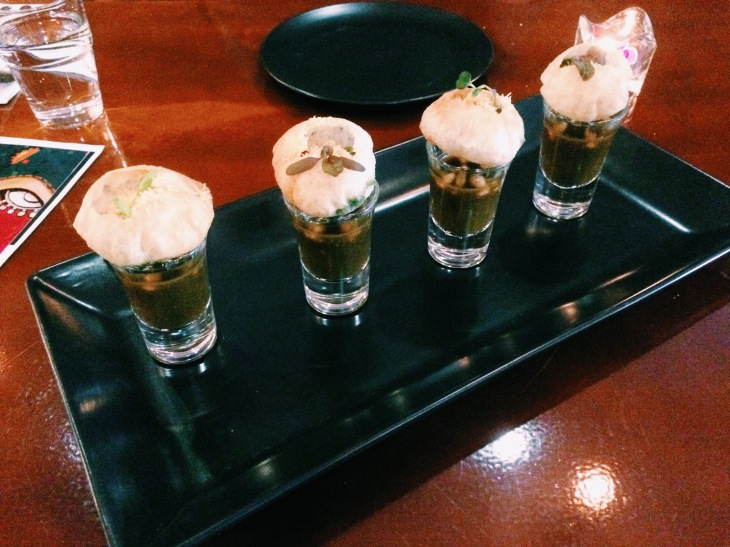 The fusion theme continued with the beetroot lava paneer tikka. Springy cubes of charred paneer marinated in a garlicky, spicy beetroot concoction were topped with an Indian-spiced slaw with creamy yoghurt dressing. Initially sweet, the beetroot sauce gave way to a gingery, piquant aftertaste that lingered on the palate. Mr WFYB honoured his hard earned picky eater reputation and so Papa WFYB and I happily split his portion between us. 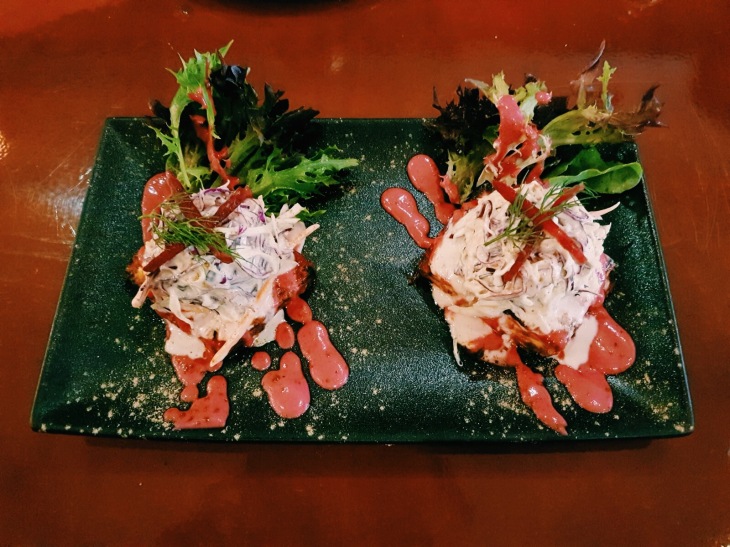 The ‘boti on fire’ was perhaps the night’s most visually spectacular dish. A bed of quinoa with diced cucumber and tomato was topped with red wine-poached pear, feta as well as moist, tender tandoori lamb with well-balanced flavours. But it didn’t stop there – Ishupal drizzled rum around the dish and then set it alight as the entire dish was engulfed in blue flames. While the lamb was the star of this dish, the burnt rum left a bitter residual taste on the plate, which Mama WFYB bore the brunt of after sweeping her quinoa across the evaporated rum. My parents, who incidentally texted me yesterday to ask if red wine should be stored in the fridge, also found this dish a touch too alcoholic. 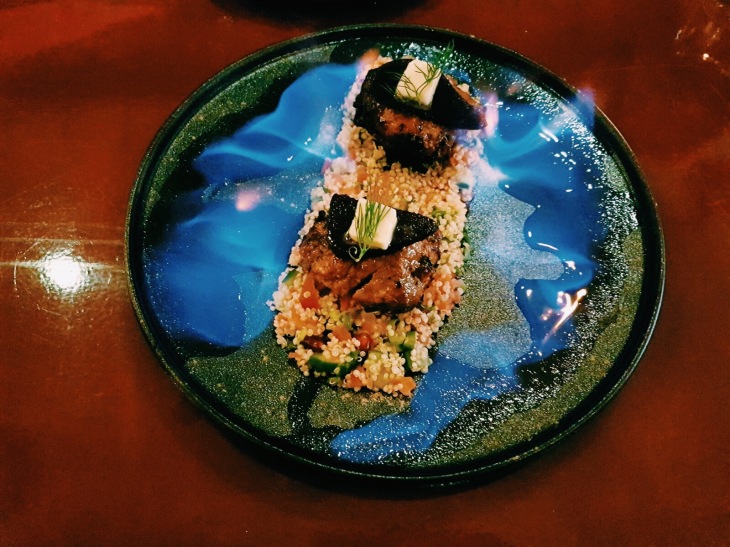 Mr WFYB, who has recently given up his vegetarianism after more than a decade of surviving on plants (read: pizza and potatoes), particularly liked the next dish – tandoori chicken with mango salsa. True to the flavours commonly found in tandoori where the meat is marinated in yoghurt and then roasted in a tandoor, Fork & Fingers’ tandoori chicken was tender and smoky. The mango salsa was a pleasingly sweet and sour accompaniment to the well-spiced chicken, while the accompanying spoons of raita and pudina on the side were a nice touch.

You can’t visit Fork & Fingers without trying its desi butter chicken lasagne, which Rohini first invented to coax her picky son into eating her food at home. After experimenting with the likes of béchamel and even paneer, Fork & Fingers eventually settled on three melted cheeses – they’d have to kill us if they told us what these three cheeses were – layered in amongst pieces of spiced butter chicken, fresh basil and mushrooms. Mama WFYB said it was “out of this world” – high praise from an Indian matriarch – while Mr WFYB happily devoured his portion despite harbouring a deep-seated hatred of traditional lasagne. I expected something similar to the grotesque combinations I’d cited above but the butter chicken lasagne that Fork & Fingers had perfected after close to 20 iterations underlined the care that had gone into this A+ dish. 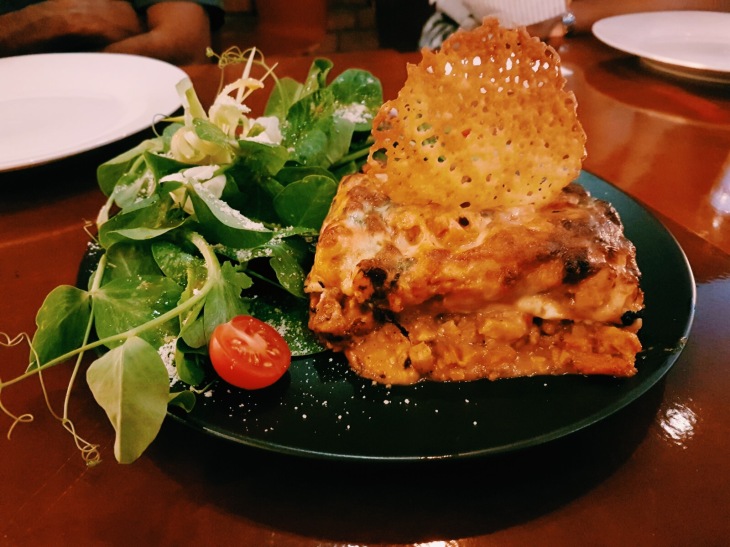 Ishupal himself accidentally invented the beef vindaloo tacos after he came home one night and found he didn’t have any roti to eat his leftover beef vindaloo with, instead choosing to pair it with soft tacos. This was one of the sloppier dishes we had, with the stewed, curried beef vindaloo and creamy raita dressing leaking out from the sides of the taco but it was finger-licking good.

The feast wasn’t over yet, because we still had to try the traditional mains. We had the goat laalmas, a fiery Rajasthani curry with fleshy pieces of goat slow cooked with red chillies, and a Goan fish curry where rockling was submerged in a sweet coconut milk concoction. Despite the fact that Fork & Fingers is perhaps more renowned for its fusion dishes, I greatly enjoyed these, although Mama WFYB thought the Goan fish curry could have been less sweet. Knowing our penchant for spice, Ishupal brought us a serve of home-ground red chilli and capsicum paste that he said would turn any curry from ‘spicy’ into ‘Indian spicy’. He wasn’t wrong.

Mama WFYB professes to be gluten-intolerant until a plate of garlic naan materialises in front of her – she complimented the naan profusely, noting that the garlic had been pan-fried before being roasted atop the naan, which removed some of its vampire-repelling pungency. I wasn’t game enough to find out.

My gut was holding up surprisingly well after all the onion and garlic ingested – I’d fastidiously followed my diet a week leading up to this dinner to allow my tummy the best possible chance of staying unbloated. I was, however, extremely full and on the verge of a two-bloat score – not that this stopped me from sampling Fork & Fingers’ dessert.

The gulab jamun cheesecake was surprisingly less rich than gulab jamun itself, a famous Indian dessert which is a milky doughnut typically doused in rose-flavoured sugar syrup. In Fork & Fingers’ iteration, a tri-layered biscuit base and diced gulab jamun cheesecake is topped with fresh kiwifruit and strawberries and then drizzled with rose petal jam. The multifaceted flavours of this unusual dessert, alongside the pistachio kulfi on a stick that we shared among ourselves, put paid to the belief that Indian desserts are too saccharine.

The warm family ethos behind Fork & Fingers is evident in its painstakingly constructed, deeply personal dishes and in the way so many of its regular customers interacted with them on the night we visited. Fork & Fingers has perfected the only lasagne Mr WFYB will ever enjoy and Indian parents are perhaps the toughest critics you can bring along to an Indian restaurant, but Fork & Fingers passed their discerning palates with flying colours.

Fork & Fingers is open from 5pm to 10pm Monday to Sunday.