I like to think I’m impervious to the caprices of Melbourne’s weather when it comes to my eating patterns – the common refrain that heat-filled curries and heavy flavours are best reserved for winter runs directly counter to my upbringing in Malaysia, where we’d feast on curry mee and nasi lemak in sweltering 33 degrees (while I was in air-conditioned confines – I’m no martyr). But this is exactly why I don’t get the opposition to eating things like sushi and salads in colder months, beyond the ideological opposition to salads themselves – you are, after all, going to be eating them in heated confines, not in the blustery streets and wind tunnels of Melbourne.

There is, however, something undoubtedly comforting about having a warm noodle soup in colder months and I’ve discovered there’s no better place to do this than Melbourne’s first dedicated Laotian noodle outpost, Noodle House by Lao-Luangprabang. I visited with my two trusty eating companions The Better Cher and Poetic Decoloniser (who have previously appeared in reviews of Little Odessa and Super Ling) and we feasted on a Southeast Asian cuisine that, until now, has had scant representation in Melbourne.

Noodle House by Lao-Luangprabang is on the second floor of a non-descript building on Elizabeth Street – you’ll miss the signage if you’re walking briskly past. My laziness to climb the stairs was rewarded with such a slow-moving lift that my claustrophobia started rearing its head, threatening to turn into a full-blown panic attack, before the doors languidly opened to reveal a cosy setting with warmly lit wooden tables. My solid recommendation: do not take the lift.

As though proving to me that there is nothing better than a hot bowl of noodles in winter, Melbourne turned on its best weather for our outing – rain bucketed down on us and poor Poetic Decoloniser got stuck in a traffic jam that showed as little sign of abating as the rain. To settle our increasingly growling stomachs, The Better Cher and I ordered the entrée of ‘pun hua horm’ – poached pork belly, egg and lettuce wrapped with spring onion – to tide us over. 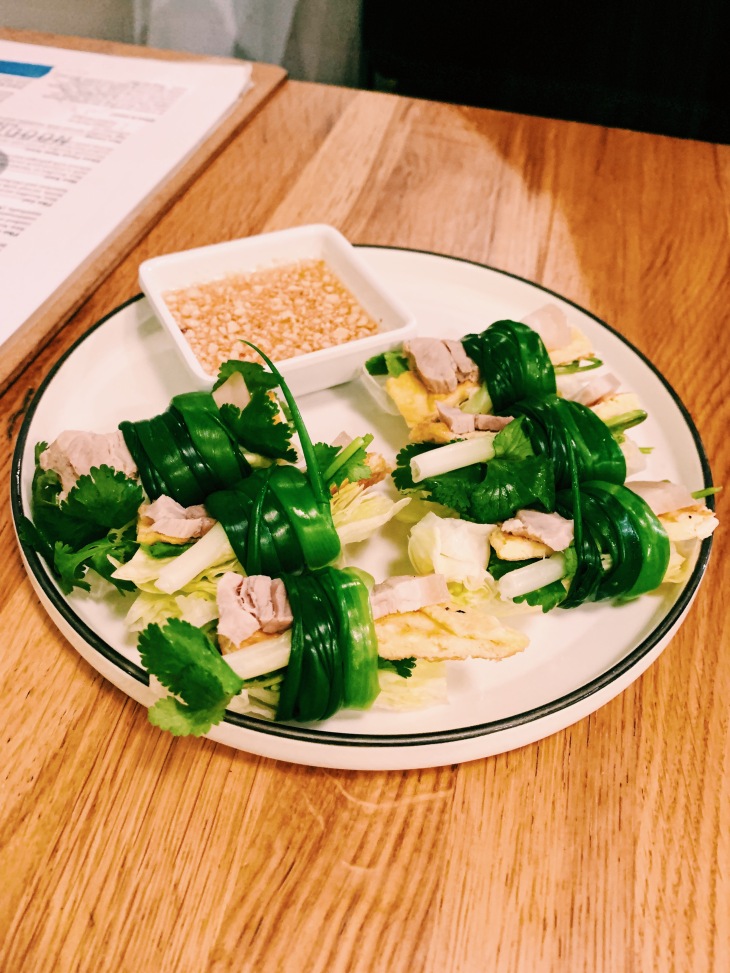 This artfully assembled dish didn’t do much to sate our hunger, but it was delicious and unlike anything I’d tasted before. I’m not usually a fan of thick slabs of pork belly as I find them sickeningly rich, but the thin slivers used in this were a good mix of fatty and fresh. A thin hollow spring onion stalk was the backbone to each mini bundle, which was then sandwiched by lettuce, an omelette strip, coriander leaves, pork belly and wrapped like a present with the green parts of the spring onion. We dipped our mini bundles into the accompanying sweet chilli sauce swimming in peanuts for a savoury hit. This short instructional video shows how easy pun hua horm is to make – it seems like a great way to use up leftovers. 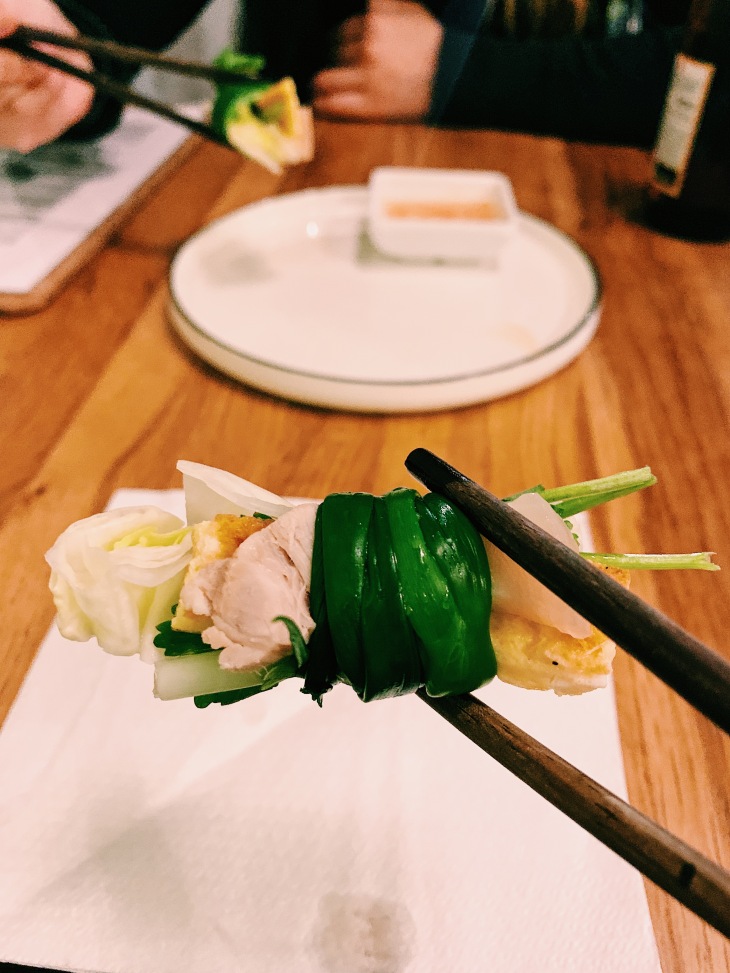 Unable to resist ordering from Noodle House by Lao-Luangprabang’s inventive non-alcoholic drink menu, which included all manner of teas, I got the lurid purple butterfly pea lemonade. It reminded me of the sweet rose syrup drink of air bandung that I grew up drinking in Malaysia – The Better Cher concurred.

Poor Poetic Decoloniser arrived soon after, but knew exactly what she wanted, having had time to read this Good Food review while stuck in traffic. She ordered the ‘khao poon nam seen’, which featured vermicelli noodles slow-cooked in a beef broth infused with galangal, shrimp paste and bamboo shoots. Poetic Decoloniser initially requested for her dish to come with the restaurant’s famous homemade noodles, but was told the noodles would become too gelatinous in her broth, so she stuck with the original vermicelli noodles. She enjoyed the heat-infused broth, which was tinged a deep red on account of the shrimp paste and chilli, and the slick yet chewy noodles. If you were expecting the same type of vermicelli noodles used in Vietnamese bún, you’d be mistaken – these noodles were long, thin and springy, appearing more akin to egg noodles than rice vermicelli.

Poetic Decoloniser did, however, struggle with the boiling broth. It’s like a latte – you want to be able to drink it immediately instead of waiting 10 minutes to enjoy it, and she had to wait quite a while before her broth had cooled enough for her to be able to eat it. She also observed that the chunks of beef brisket within her broth were chewy and dry, either because they were cut in parallel with the grain or they weren’t fatty enough.

It’s funny The Better Cher acquiesced to visiting a noodle soup place because it turns out she hates soup. She initially ordered the ‘mee krob’ – crispy noodles served with a beef gravy sauce and Chinese broccoli – but she was told it’d take around 25 minutes to come out owing to the fact that the kitchen only has one wok. Being a professional chef herself, The Better Cher had scoped out the size of Noodle House by Lao-Luangprabang’s semi-exposed kitchen on the way in and had remarked at how small it was, so instead she ordered the ‘mee lueng’ – egg noodles served with wontons and a side of crispy pork. 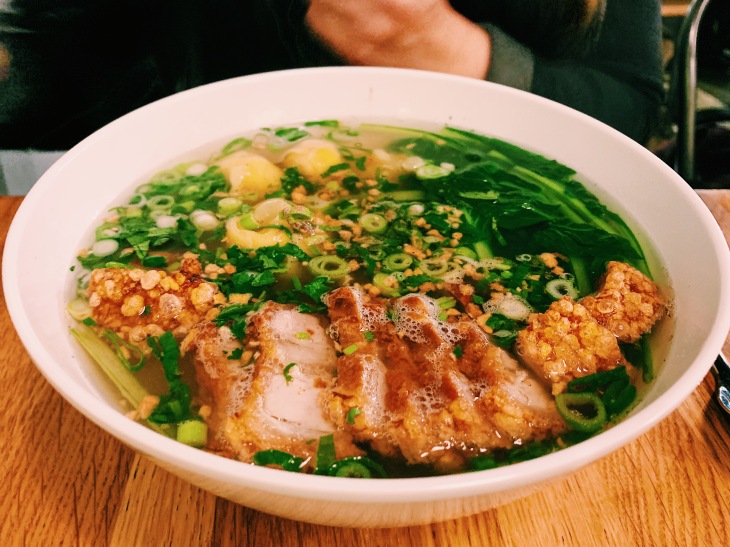 Despite the description forgoing any mention of a broth, ‘mee lueng’ turned out to be a noodle soup dish, which The Better Cher accepted with good grace. She found it perfectly tasty with well-done crispy pork.

I turned out to be the most impressed by my dish. So accustomed to either chicken or beef broths when I venture out to eat pho, I instead opted for the ‘khao piak moo krob’ – homemade rice noodles served in a pork broth topped with crispy pork.

These homemade noodles were a revelation. Soft, fluffy and slippery, these rice noodles were plumper and more gelatinous than the ones I’m used to getting in my pho or char kuay teow and it was because they were made from scratch from both rice flour and tapioca flour. I loved the texture. My dish was blanketed in chopped spring onion, fried garlic and fried shallots, the last of which I easily could have asked to be removed to safeguard my tummy, but the combination of all three brought a welcome savouriness to the noodles. The pork balls were firm yet easy to bite into, and the crispy pork strips – softened slightly by the broth they were sitting in – were well seasoned and moreish. I would order this noodle soup dish again in a heartbeat.

Only when we’d finished eating did Poetic Decoloniser notice that I hadn’t squeezed my lemon wedges into my tea, another tip she’d picked up while reading the aforementioned Good Food review. I squeezed it in and whatever little purple tea I had left turned into a lighter pink tea with more pronounced citrus notes. It was an interesting turnaround in flavours.

Having finished nearly all my broth – I can never resist a good broth – I was up to my neck in water, which meant I only hesitated a second before going along with everyone’s suggestion to order dessert. Truth be told, I may have spearheaded the push in the first place, but only because my favourite dessert was on the specials board – ‘khao niow sung kaya’, coconut sticky rice served with a steamed egg custard. 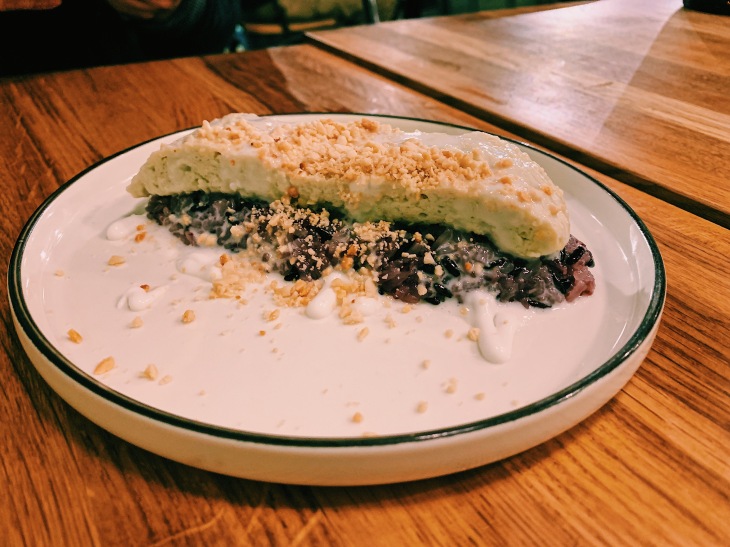 I got Poetic Decoloniser, who is also lactose-intolerant, and the nothing-intolerant The Better Cher to taste test the dessert before me so I could pop a Lacteeze or two if needed, but they reassured me that the custard was made from coconut milk. The result was a light and fragrant dessert, which wasn’t too sweet and not too heavy despite the presence of sticky rice. We inhaled this in a few minutes.

I will be back, despite ending up very bloated. Whether it was because of the fried shallots or the actual broth is anyone’s guess, but I’d be willing to forego the shallots to see if the result is any different. I’ve found my new favourite soup noodles in the khao piak moo krob, but took note of the dry noodles which looked equally good. Despite us steering clear of the more classic Thai staples on the menu like pad kee mao and pad see ew – the wok waiting time helped our decision – the versions we saw arrive on our neighbours’ table looked anything but stock standard. Vegetarians will unfortunately find there is little on the menu for them, but omnivorous noodle lovers will find plenty to love. 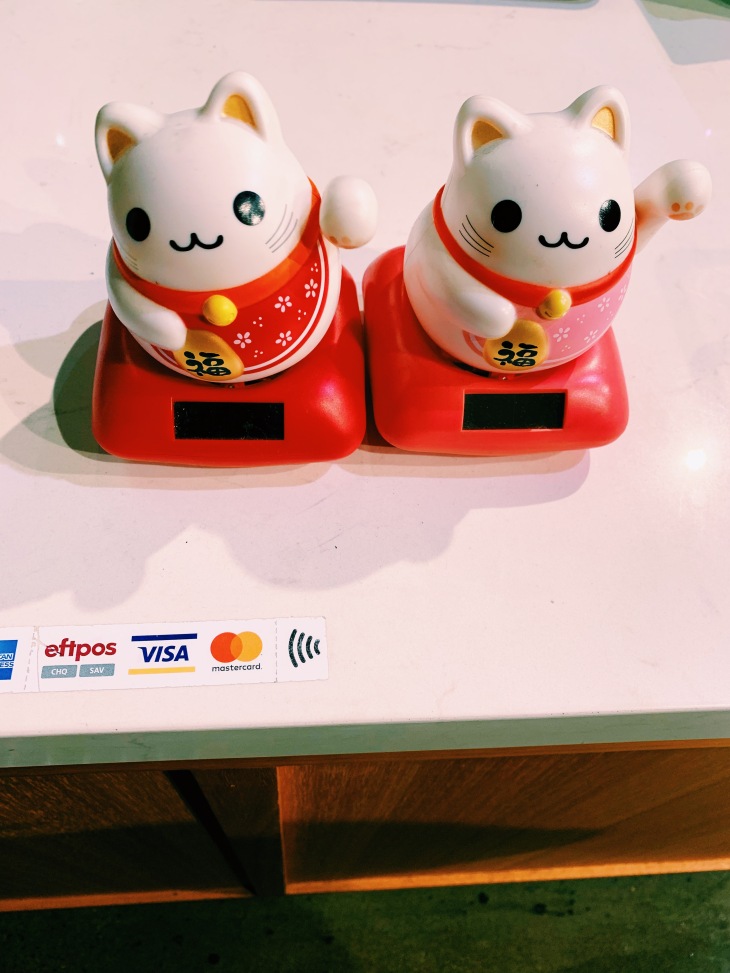 Noodle House by Lao-Luangprabang is open every day from 12pm to 4pm and from 5pm to 9.30pm.