What: The best jaffle you’ll ever eat – the mapo tofu jaffle

A Google search of Super Ling will yield results of super king mattresses after page two, but you’d be best off reading the links that mention a mapo tofu jaffle.

Ever since I’d found out about Super Ling and these mapo tofu jaffles they produce, I’d been obsessed with trying one and could think of no two better people to go with than The Better Cher and Poetic Decoloniser, who last made an appearance in my review of Little Odessa and who can ascertain ingredients and flavours in food better than anyone I know.

Super Ling is a newish venture by the same person behind the next-door watering hole Hotel Lincoln, Iain Ling, and Michael Li, a chef who has worked at MoVida, Lee Ho Fook and Restaurant Shik and whose Hakka heritage has influenced the direction of Super Ling’s menu. The connection with Hotel Lincoln comes in handy because Super Ling doesn’t have its own bathroom so you’ll have to pop in next-door once you’ve broken your seal.

The Better Cher panicked when she checked the website’s online booking system and only saw a slot open for 5.30pm but when she called the restaurant, they told her we’d have a spot on the communal table. Fears of intractably high stools were cast aside when we arrived and were seated on a regular three-person table, so we can only guess there must have been some last-minute cancellations. Moral of the story: always call, even when you don’t want to.

Unbeknownst to me, Super Ling had two jaffle options – the mapo tofu jaffle and the eggplant tofu jaffle, which means vegetarians can get in on the fusion jaffle action too! But if you do eat meat, I’d advise you not to go past the mapo tofu jaffle. These were unlike any jaffles I’d ever had before. Firstly, they were round. Crisp spheres of white bread toasted to perfection broke perfectly with our every bite to reveal a fiery mix of minced pork, crumbled tofu, water chestnuts, fermented bean paste and a hint of Sichuan pepper. 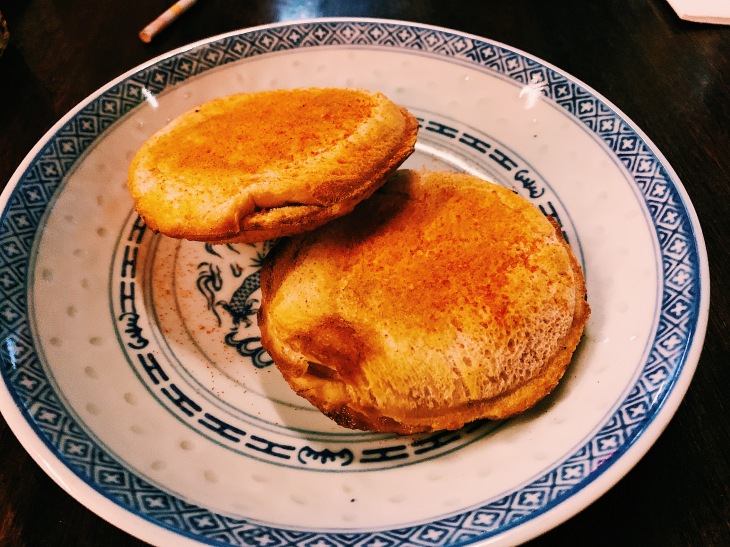 The discs are generously dusted in chilli powder, which I inhaled instead of swallowing at one point and proceeded to cough non-stop for 10 minutes – highly embarrassing when you’re with friends of colour who believe in your ability to tolerate chilli. Poetic Decoloniser noted that the jaffle was neither too oily nor rich – characteristics you’d associate with your average jaffle – while the creaminess of the tofu reminded her of cheese. Despite the weight of the ingredients enveloped within, the jaffle wasn’t wet – it remained dry and crisp with strong structural integrity. This may be the best thing I’ve tasted this year. 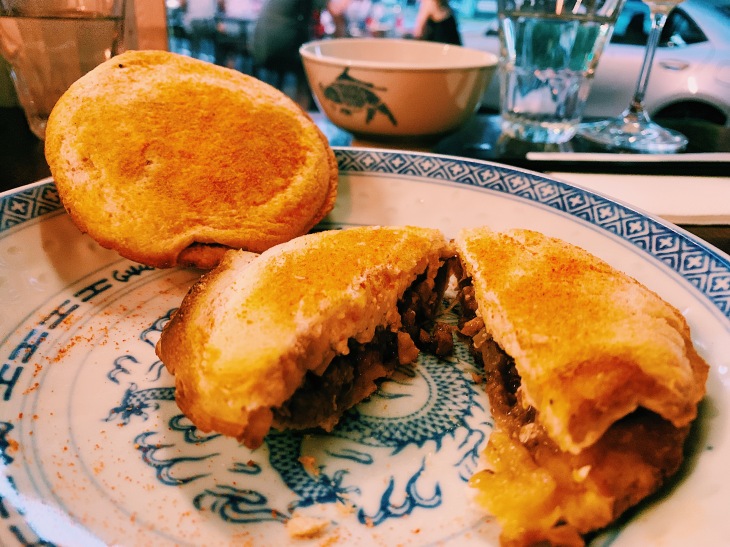 It was hard for anything else we ate thereafter to top the mapo jaffle but as a testament to Super Ling’s exceptional offerings, a few things came close. With the temperature outside still in the mid-thirties, we decided to forego the pork and cuttlefish wonton soup – though we’d heard great things about it – in favour of the pepper beef tartare. These came served with rice crackers so light and crisp they melted in your mouth upon first contact with your tongue and when heaped with the diced beef tartare – as fresh as it was flavourful – they were an ideal pairing. Fried strips of potato atop the beef tartare added a nice savoury aftertaste, while the spring onion mayo was rich yet refreshing. Poetic Decoloniser commented that the fried shallots atop added a pleasing umami taste.

We’d heard so much about Super Ling’s meat platter – which contained braised pig’s ear, beef tongue, tendon and honeycomb tripe and shin – but the thought of it gave us (pre)-meat sweats so in favour of not making our body work any harder than it already was to keep cool, we ordered the soy braised pork belly, the black fungus with gai lan and luffa, the lap cheong fried rice, and the Chinese doughnuts. 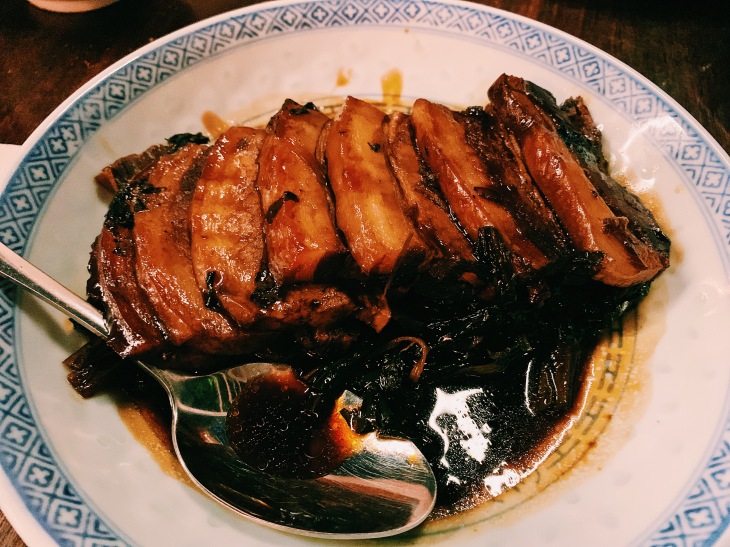 This turned out to be the perfect amount of food. I don’t tend to enjoy pork belly when it’s prepared in a Western style, but Super Ling’s braised version was teeming with the salty and savoury notes of soy sauce, which also had the benefit of obscuring what my mum calls ‘the smell’ of pork. I don’t see this referenced as much in Western cooking, but whenever my mum cooks, she talks about the things she does to reduce the ‘smell’ of meat – like blanketing it in ginger, garlic, turmeric, cumin and/or pepper. Super Ling’s thin slivers of pork belly were tender and moist, pairing perfectly with the lap cheong fried rice (which was nice but ultimately unmemorable compared to everything else) and the black fungus with gai lan and luffa.

The Better Cher, who is also a chef, educated us about the vegetable luffa (something I’d never heard of). Due to its sharp ridges, luffa is difficult to peel and additionally, it’s easy to overcook because its tenderness causes it to disintegrate easily. Fun fact that The Better Cher dispensed with: luffa can be easily made into bath sponges (i.e. loofahs!!) if allowed to wither on the vine during the growing process. When cooked, it retains a mild and slightly sweet flavour and in Super Ling’s version, it was distinct yet complementary to the garlicky, rubbery black fungus and the strips of gai lan. They definitely hadn’t overcooked it.

Poetic Decoloniser had never tried Chinese doughnuts, otherwise known as youtiao or you char kway, before but greatly appreciated her first experience. I associate it with the Malaysian comfort food dish of bak kut teh (pork bone tea soup), and tore strips of these and dipped them into the braised pork belly sauce. We could tell that Super Ling had flash-fried theirs in exceedingly hot oil because they were crisp and crunchy.

At this stage, we were full without being overstuffed and so our thoughts moved on to dessert. Super Ling only has one dessert option – a Chinese spin on mille feuille, a French sort of custard slice. Super Ling swapped out the traditional puff pastry layers with strips of crispy wonton and spiked the requisite vanilla custard with notes of Sichuan pepper. I’d never tried a bona fide mille feuille before, so admittedly had no benchmark upon which to compare this to, but I liked this enough without loving it. It had interesting flavours and I can never go past wonton wrappers in any form, but after the crunchiness of our savoury main meals, I felt instead like a soft dessert I could sink my teeth into (literally).

Poetic Decoloniser, The Better Cher and I rolled around the corner to Hotel Lincoln for a nightcap as I bypassed more alcohol in favour of clutching my engorged tummy, but I regretted nothing – I had thoroughly enjoyed the meal and was only sad I didn’t have more of the mapo tofu jaffle.

I’m super keen to visit Super Ling again, whether it’s during lunch so I can try one of the four fresh housemade noodles it has, or during dinner so I can try their famed fried barramundi collar and meat platter. But make no mistake – whenever I next visit Super Ling, it won’t be complete without ordering their one and only mapo tofu jaffle.

Super Ling is open from 11.30am to 3pm Monday to Friday and from 5.30pm to late Monday to Saturday.