Nearly every cuisine has its own form of dumplings, and I love each and every one of them – from the Nepalese momo, the Chinese jiaozi and the Japanese gyoza to the French quenelles and the Polish pierogi. The last is one of the many Eastern European dishes new Fitzroy wine bar Little Odessa, which was established by Ukrainian brother-sister duo Stefan and Sofia Soltys, focuses on.

For how much I enjoy pierogi, I haven’t had it nearly enough in my life and so I called upon The Better Cher, who shares her name with the Goddess of Pop, and Poetic Decoloniser, a writer on a journey to decolonise her soul. The Better Cher happens to be a chef, among numerous other hats she wears, and Poetic Decoloniser is a food connoisseur, so I couldn’t have been in better company.

On the Sunday that we visited, Little Odessa was showcasing a special menu of five different dumplings from five regions of Eastern Europe – kalduny (Lithuania), varenyky (Ukraine), pierogi (Poland), khinkali (Georgia) and zlikrofi (Slovenia). You could have two dumplings of one flavour for $8 or try each of them for $20. Being the savoury sycophant that I am, I opted for a serve each of the potato and pickled cabbage pierogi and the smoked pork and mushroom kalduny, bypassing the sweeter sounding sour cherry and cottage cheese varenyky and the beetroot pate zlikrofi. The Better Cher and Poetic Decoloniser both went for the five-dumplings-for-$20 deal.

We had the option to get matched drinks with each of our dumplings, which was a cute touch – The Better Cher got a Polish pilsner and Poetic Decoloniser got the Georgian amber wine. I decided to get nothing to offset the bloat effects of having flour dumplings.

The dumplings soon arrived and we enthusiastically tucked into them, hungry as we were. It didn’t take long, however, for my food expert dining companions to deconstruct the faults of each dumpling, and there were many. 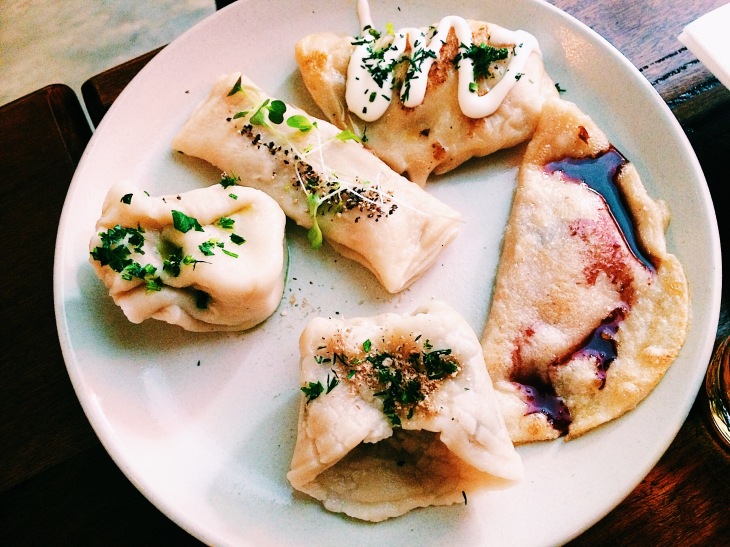 The beetroot pate filling in the zlikrofi was too watery and not reduced enough. It had hints of caraway, but not enough to have a discernible impact. Poetic Decoloniser commented that there were concentrated bits of black pepper in her zlikrofi, instead of the pepper being scattered evenly throughout, while The Better Cher said the consistency reminded her more of a beetroot puree than a beetroot pate. Moreover, both of them found the skin of the zlikrofi far too thick.

The herbed cottage cheese khinkali fared better. The skin in this one was thinner, and Poetic Decoloniser found the gentle, creamy flavours of the cottage cheese highly comforting. The Better Cher remained nonplussed, though she said the bits of dill throughout were “nice” (Side note: I love dining with a badass chef).

I couldn’t comment on the aforementioned two dumplings, but the cabbage in my potato and pickled cabbage pierogi wasn’t scattered evenly throughout – meaning you’d get a mouthful of cabbage in one bite and a mouthful of herbed potato in the next – and the skin was thick and rubbery. To add insult to injury my friend had me over last week to try her potato and onion pierogi of Costco fame, and I remember liking those a lot more.

Of my two dumplings, I liked my smoked pork and mushroom kalduny far more than the underwhelming pierogi. The strong, meaty undertones of the mushroom were complemented perfectly by the woodsy aroma of the smoked pork. This was my favourite dumpling.

Nevertheless unsatisfied with my dumpling experience, I ordered a serve of fried pickled cucumbers with dill salt to salvage my afternoon and these were actually really good. Fried in a tempura batter reminiscent of whitebait fritters, the acidity of the cucumbers was offset by the thin, crisp layer of flour they were encased in.

We surmised that perhaps the dumplings weren’t Little Odessa’s specialty and that the promise of delivering five standout dumplings from five separate regions was a touch ambitious. Their usual menu features traditional Eastern European dishes like borscht, chicken tabaka and badrijani which have gotten more positive reviews than the one I’ve written here, and I applaud the way they’ve drawn attention to dishes many Melburnians who aren’t of Eastern European heritage wouldn’t be familiar with.

Little Odessa is housed in a beautiful space – cosy with sun streaming through and clusters of friends and families huddled over bottles of wine, it’s the perfect local for a spot of day drinking. But alas, my hunt for Eastern European dumplings that taste as good as the ones I remember having at After the Tears in Elsternwick continues – if you know of any, please let me know.

The overly thick dumpling skins and the range of pickled vegetables I had caused me two bloats, but in this case, the bloats were sadly not worth it.