What: Sumac-crusted avocado, which are not two ingredients I’ve ever tasted together, but I can’t have one without thinking of the other now

It was with a great sense of dismay that I learnt Bedford Street, which used to serve fried chicken waffles for breakfast, was being revitalised as Terror Twilight – a café specialising in deconstructed bowls and broths, smoothies named after fitspo aerobic sessions like ‘Body Movin’ and ‘Go Flex’, and ‘upgrades’ in the form of oils that you could add to your coffee to ‘get the most out of your day’ and ‘provide fast and sustaining energy’.

Cynicism aside, Resident Photographer and I could have used such restorative oils in our coffee after having registered ourselves for an all-day grammar course nearby. We instead opted for a DIY bowl each. You can choose a base of steamed brown rice, quinoa and freekeh, or cauliflower and broccoli rice plus a vegetarian salad and protein. The good thing about the bowl was that I was certain I’d be able to customise it to be onion and garlic-free because the last thing you want to do in an all-day course is asphyxiate the person sitting behind you.

The first choice I had to make was an easy one because freekeh isn’t gluten-free and cauliflower rice would have wreaked havoc on my digestive system, so brown rice it was.

After this, all hell broke loose. When I last went, the bowls were operating under a slightly different system where you could choose three vegetarian sides, a dressing and a protein side. I chose the roasted sweet potato (strike 1 for a FODMAP-intolerant person but I wanted something hearty), heirloom tomatoes, seasonal greens, a cashew dressing (strike 2 for a FODMAP-intolerant person but it sounded superior to the lemon vinaigrette and spiced yoghurt) and fresh silken tofu (strike 3 for a FODMAP-intolerant person because unlike firm tofu, silken tofu is high in fructans and galacto-oligosaccharides). When informing the waitstaff of my intolerances – I mentioned only the onion and garlic because the full gamut would have flummoxed her – she told me the sweet potato was roasted in a marinade that had onion and garlic, and so I replaced it with the avo + lemon (something else I shouldn’t have been eating). At the very least, I reasoned to myself, everything on my bowl would be devoid of wheat, onion and garlic. I tried.

Resident Photographer went through a more painless process in choosing the ingredients of his bowl and opted for steamed brown rice with roasted sweet potato, turmeric-spiced cauliflower, seasonal greens, the same cashew dressing I chose and poached chicken.

I didn’t expect to enjoy my bowl as much as I did. The cashew dressing was smooth, rich and predictably nutty, going especially well with the seasonal greens, and the crunch of the beans and the sesame seeds drizzled over the firm tofu added texture to the bowl. The avocado was prepared in an interesting way, where it appeared to be dipped in sumac. Paired with a few squeezes of the accompanying lemon and a generous spoonful of brown rice, all my ingredients were in sync with one another and complemented each other perfectly. 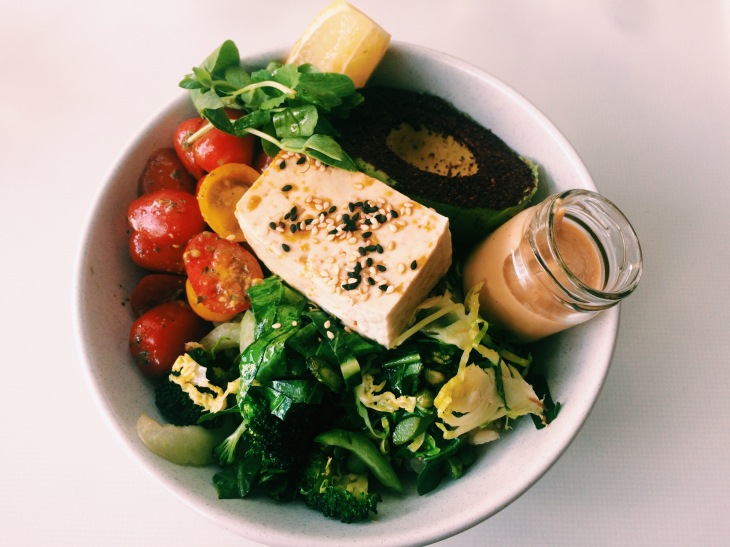 Resident Photography was less positively disposed to his bowl. He found the poached chicken overly gelatinous and didn’t enjoy the combination of ingredients in his bowl, finding the sweet potato too mushy an accompaniment to the already viscous chicken. He did however enjoy the cashew dressing, the turmeric-spiced cauliflower and the seasonal greens – you win some, you lose some.

I may have won some by escaping with zero bloats despite eating many ingredients that I shouldn’t have, but both Resident Photographer and I noted the steep price tag attached to our relatively small bowls. Mine came up to $20.50, which felt slightly pricey for something that almost exclusively contained vegetables, and Resident Photographer’s came up to $21.50 due to his choice of chicken.

Although I didn’t have a coffee on this occasion, Terror Twilight has almond milk and soy milk for those of us who can’t ingest lactose. It also has a batch brew, a cold brew, a pour over, something called a chai la lai and a coconut brew which my friend Dreamcatcher (who last appeared in my four-bloat review of Camus) swears by.

I’m slightly disappointed that Terror Twilight tweaked its DIY bowl menu – I really liked the option of that cashew dressing and the combination of ingredients that I ordered, but there are a few things that have caught my eye otherwise: from the cold smoked kingfish to the gluten-free chia and matcha pudding. I may be back, but with the unrelenting wave of new cafes that continue to mushroom in every corner of Melbourne, it may be a while until me and that sumac-crusted avocado meet again.

Hiding beneath this sesame-drizzled sea of greens, tomatoes and egg strips is a bed of soba which only gave me ONE BLOAT, though I couldn’t decide if it was my overly tight jeans constricting my breathing (why do people wear jeans again?) or actual bloats. @kissa.taiyo.sun is a small, intimate Japanese cafe bordering Merri Creek and though it has many things I’d love to try, from Japanese curry ON a croissant to a tuna melt on fluffy Japanese bread, I played it safe and stuck to their lunchtime soba dish. I’m not supposed to eat tomatoes and largely steer clear of tomato-based sauces and pastes, but felt mostly okay after eating them in this dish. Note: this soba dish can be easily made vegan or gluten-free
ZERO BLOATS from this tofu pad thai at @thaitownqv, a new Thai restaurant in what I believe used to be Red Spice Road? It was pleasant without hitting the ball out of the park – the bean sprouts and chopped spring onion added a welcome crunch, but the dish lacked the sour tamarind hit that I crave when I have a pad thai. I also noticed the restaurant had hardly any vegetarian options – typically ‘tofu’ is listed as a potential protein on many Thai menus, but they weren’t here, though I do think you can easily customise dishes to be meat-free, as I did with this pad thai. Thai Town has a pretty cute vibe – it’s designed to resemble a hawker centre and there was a wide selection of dishes on its menu, albeit many of which I couldn’t eat. At $13.90, this dish was outside my $10 lunch budget so I may be back, but not in any hurry
@anatoliatantuni is great for vegetarians, vegans and, much to my relief, people who don’t tolerate wheat very well. They have a wide selection of flatbread wraps, gozlemes, kebabs and burgers but I got this chicken tantuni on rice with tabbouleh and it was 💯. Tantuni is a speciality from the south of Turkey where diced meat is cooked in a shallow, large frying pan called a sac. It only resulted in ONE BLOAT – link to this week’s blog post in bio 👀
Paella is maybe one of my top five favourite foods and visiting Preston Market is something I’ve NEVER done if you can believe it so I’m glad I got a chance to combine the two with @penny.eva. We shared this half seafood, half chorizo and chicken paella and it was to-die-for; the crunched up bits of rice spiced with garlic, tomatoes and saffron were the highlight – I honestly would’ve probably been as happy to just eat a vat of the rice by itself. Swipe right to see the best chicken taco from @cornutopiatacos that I also had after devouring my half of this paella. Surprisingly only ONE BLOAT from ingesting a lot of onions and tomatoes
Parents’ birthdays aren’t the time to follow my intolerances, so I indulged and shared in on @forkandfingersav’s butter chicken lasagne in honour of my mum doing yet another lap around the sun 🥳 I’ve blogged about Fork and Fingers before – do a search on WFYB to read my full review – and found this just as impressive as when I first had it. The flavours were well-balanced, the sheets al dente and sturdy, the three-cheese bechamel creamy and complementary to the morsels of spiced butter chicken. I felt fine immediately after having this – and several other dishes, ranging from beetroot paneer tikka to lamb seekh kebab – but the THREE BLOATS made themselves known later in the night
I’ve felt awful all day – my stomach has been in knots and my bowels have been completely haywire (sorry – TMI, but you know what you’re getting when you follow someone with food intolerances!!) – and I’m beginning to realise it may have nothing to do with what I’m eating, and everything to do with the suffocating haze blanketing Melbourne at the moment and the sick collective despair we’re all feeling. I’m still trying my best to follow my intolerances so my body doesn’t feel any worse than it already does and I tried again last night at @musashiramenbar – I knew my gut couldn’t tolerate ramen but I ordered rice with unagi and it came with a side of miso soup. I still felt terrible after at THREE BLOATS but I would’ve 100% felt worse if I indulged in the sweet, sweet nectar that is a tonkatsu broth
×
%d bloggers like this: