What: Steak regular people would die for but which made me feel like I wanted to die

I’d already rehearsed what I’d say to the waitstaff before Pocket Rocket arrived and it was something along the lines of: “I know it’s foolhardy to ask for something that doesn’t contain onion and garlic in a French restaurant, but…is there anything on the menu that doesn’t?”

It was my first time at French steakhouse Entrecôte and it was my first friend date with Pocket Rocket, an inimitable pint-sized woman who likes steak frites as much as she likes social justice, and I was trying to play it cool. Pocket Rocket knew about my blog but I didn’t want to waste our time by questioning the waiter extensively about what I could and couldn’t eat.

Alas I didn’t pose my question to the waitstaff in time and before I knew it, Pocket Rocket had arrived and I’d acquiesced to ordering the 250g Angus Porterhouse with fries alongside her. I’m not even particularly a fan of steak – what was I doing? But if nothing else, I figured steak usually came with an inoffensive jus, and that was unlikely to breach my intolerances.

I expected something stuffier when Pocket Rocket suggested Entrecôte, but I was pleasantly surprised that a) we hadn’t needed a booking to get in (although I soon learned after that they don’t take bookings anyway) and b) Entrecôte is actually quite lovely and accessible. Tucked into a corner overlooking the verdant Botanic Gardens, the restaurant has a sizeable outdoor front courtyard where people of varying ages and persuasions dine, and which is where we chose to sit to enjoy the pleasantly balmy night. Lilting French music played in the background and waitstaff dressed impeccably in black, white and man buns danced around the narrow spaces between the tables. I felt like I’d been momentarily transported to Europe, until I spotted a fake tan and reminded myself that I was very much in South Yarra.

Soon after ordering my dish, I spotted the steak frites with a curious green sauce drizzled all over the steak. I turned to Pocket Rocket with concern.

Me, whispering to PR: Do you think the sauce on the steak will have onion and garlic?
PR, laughing incredulously at me: Of course! It’ll have shallots or something. This is a French restaurant!
Me: ….

The steak was to come with a “sauce Maison au beurre et aux herbes”, which post-meal sleuthing revealed was a “house sauce with butter and herbs” and what I’m sure was either a heap of garlic or onion or both, judging by how I felt after. 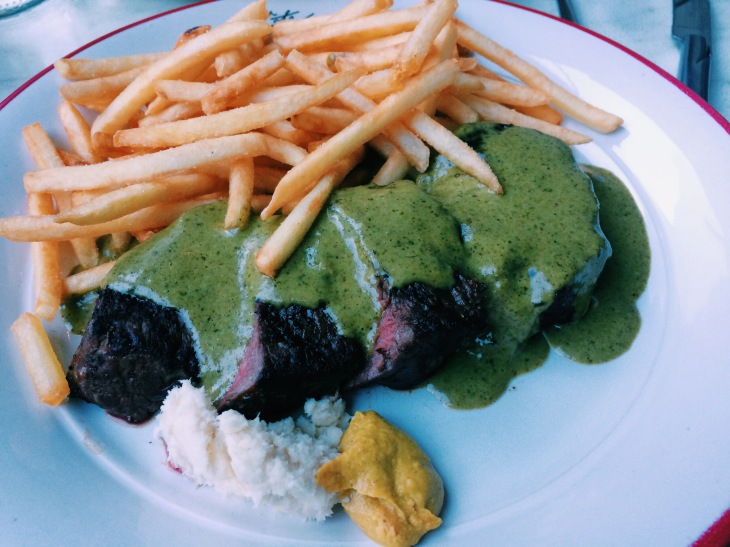 The steak, which I’d requested to be cooked medium-rare because, obviously, was sliced into numerous plump slices which boosted my level of enjoyment somewhat. A big hunk of meat invariably turns me off the few times a year I have steak. The herby butter sauce was everything it promised to be and each slice was generously doused in it – Pocket Rocket usually gets the sauce on the side, but had forgotten to on this occasion. We’d helped ourselves to an array of mustards, and I’m pleased to say the horseradish one upped the spice quotient of my meal considerably.  The side portion of fries was sizeable, and what was better, the fries were on tap – you could order more if you wanted for no extra charge, not that this was an option I was able to avail myself of once I was done with my meal.

Each steak frites comes with a greens side salad comprising radish, walnuts and a Dijon vinaigrette. This was a suitably light and refreshing counterpart to the heaviness of the steak, and to make things better ­– Pocket Rocket isn’t a fan of walnuts, so I snaffled every little one I could find.

For $44.90 a pop, you’d expect to be sufficiently full after the steak frites and Entrecôte didn’t disappoint on this front – I barely finished my meal and Pocket Rocket struggled to finish her last few slices of steak after a strong start. My people pleasing tendencies almost reared their head again when Pocket Rocket talked about how nice dessert would be, but common sense prevailed and I resisted, which turned out to be a very wise decision seeing how bloated I ended up. I did however order a peppermint tea to help with my digestion and I’m sad to say it was too little too late.

The tea was notable because it came with this fancy contraption that I had to enlist the help of Pocket Rocket to use. The contraption had a strainer with a stand attached to catch the drips and sit independently on a table without actually touching the table – very fancy stuff, or maybe just for us tea novices. What befuddled us was how to pour the tea into the strainer without it pooling in the bottom of the stand – although we soon figured out that the stand turned to the side, which permitted the tea to flow through the strainer to the cup below. The things fancy French restaurants teach us.

For those who don’t or can’t eat steak, Entrecôte has the likes of grilled scampi, seared ocean trout, duck confit and a cheeseburger. Vegetarians, as far as I can tell, would only have a main of whipped brie with black garlic tuille and red sorrel to choose from, which while heavenly sounding, probably doesn’t justify its $36.90 price tag.

By the end, my best intentions to public transport it from South Yarra to Fitzroy North had all but dissipated with the increasing discomfort wrought by my distended stomach. I called for an Uber and bid Pocket Rocket farewell, vowing never to let first friend date nerves get the better of me again.

Entrecôte South Yarra is open from 7am to 11pm every day.