What: An oldie but a goodie

Despite belonging to a cohort of money-wasting millennials who eat out, on average, nine times a week, there are embarrassing gaps in the places I’ve dined out at. I somehow missed the whole Mamasita craze and visited for the first time only two months ago, and have yet to go to world-renowned Melbourne institutions such as Cutler & Co, Attica and Vue de monde because, if I’m being honest, I’d rather spend $20 on dumplings at Shandong Mama.

I include Smith Street Alimentari in this ever-growing list of places I have yet to eat at because although its famed courtyard has featured many a time on my Instagram feed and everyone raves about its fresh produce, last month was the first time I dined there.

That’s partially because I thought Smith Street Alimentari was purely a delicatessen famous for its rotisserie meats, fresh pasta and take-home meals, which is great, if you’re not intolerant to everything that is likely to be in them. However, they do have a brunch menu, and it is a very good one at that.

I was tossing up between the poached eggs, baby spinach, bacon, hollandaise and hash brown (mostly because I can never pass up the idea of a hash brown) and the buffalo soldiers, which comprised baked buffalo mozzarella wrapped in prosciutto, tomato sugo, pesto and polenta soldiers. I know, it was a no-brainer really – I went for the latter. I figured I could pop two lactose pills down and suitably ignore the traces of garlic that were likely to be in the pesto.

What has become awkward about consuming dairy in public, other than my subsequent disappearance immediately after, is this new brand of lactose tablets I’ve bought that requires me to furiously shake the dispenser with the faint promise that the pills I so desperately need will eventually tumble out. They’re not as seamless as Lacteeze, you need to swallow them with water (do not try chewing them – take my word for it), and the act of getting them is just slightly disruptive when your friends are trying to conduct a conversation above the din of the dispenser.

Thanks to the two pills that did eventually surrender into my palm, the buffalo soldiers was the best brunch I’d had since the pasta breakfast at Small Axe Kitchen, minus the intense symptoms I experienced after ingesting copious amounts of wheat at 11am. I used the deep fried polenta soldiers to mop up the generous tomato sugo base, and paired each mouthful with a serving of the salty, creamy goodness that was the prosciutto-wrapped buffalo mozzarella and the drizzled pesto.

Smith Street Alimentari’s lamb merguez sausage featured in two other friend’s dishes – one of them ordered it as part of a Middle Eastern-inspired dish with pita bread and a fried egg, while the other had it with scrambled eggs and a side of hash browns (which includes two hash browns, rightfully so).

My newly vegetarian friend got the scrambled eggs on toast with a slab of haloumi and harissa baked beans. Servings are generous, and your sub-$20 meal is likely to perform the imperative function of a weekend brunch and keep you sated until dinner. 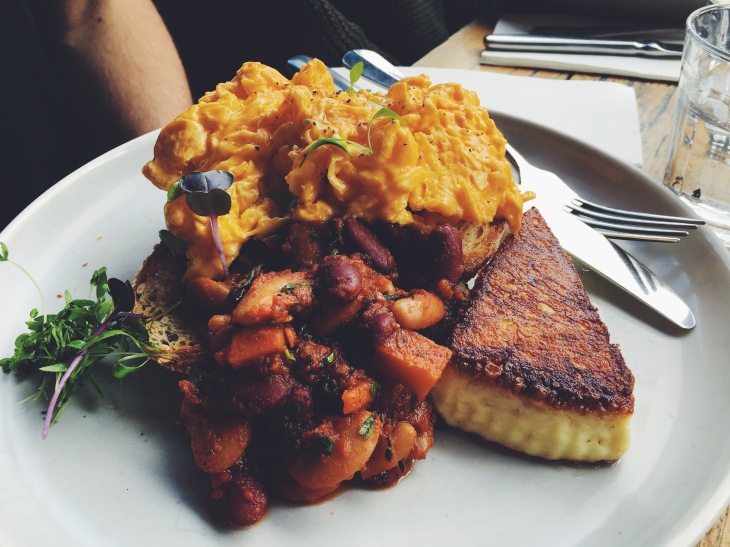 We didn’t get a chance to visit the famed courtyard, because Smith Street Alimentari still attracts a crowd despite being more than three years old, but sitting on an outdoor table that lined Smith Street was perfect for the crisp spring morning that it was.

Smith Street Alimentari is open every day from 8am to 6pm.