What: What your mama would make, were your mama prone to hanging out in arcades

I know Shandong Mama isn’t exactly the newest kid on the block, but while people are still lining up to enter that abominable red door place on the corner of Little Bourke and Russell, I feel it is my duty as an eater to publicise the availability of the delicious and cheap dumplings at Shandong Mama.

7pm weeknight dinners are always fraught – you either have a strategically late lunch to avoid snapping at your colleagues once it hits hangry o’clock (usually 2.45pm for me) or you have a snack after work, but not such a big snack that your entire appetite is decimated.

I did neither. I went to a cosy book club gathering beforehand at Ferdydurke (note that they have $5 mulled wines all night from Monday to Wednesday) and when conversation deviated from the discussion of the book to whether we should rightfully order some food, I nodded quickly to avoid the intrusion of common sense when a dear friend suggested we share a little bowl of mac and cheese. Never ask me to have mac and cheese and expect me to say no.

While an entirely new post can be dedicated to the delicacies at Ferdydurke (THE MAC AND CHEESE WAS VERY GOOD), it sadly did affect my appetite. Let’s just say the bowl wasn’t that little. We can’t always be the best people we want to be, and on this occasion, I faltered. Which is why I baulked when my friend suggested ordering four plates of dumplings, two plates of egg pancakes and two bowls of spinach salad when I got to Shandong Mama. They baulked in return, not knowing if I was joking or if I’d finally given in to that health kick I’d been saying I’d start since New Year’s Day 2011.

Not that I should have been concerned. The relatively normal people that I was dining with had the good sense not to eat anything else in the hour leading up to dinner, and all the food was swiftly consumed. And boy, was it good.

You can’t go to Shandong Mama without ordering the seafood dumplings the namesake region is so renowned for. They’re unlike anything I’ve tasted anywhere else in Melbourne and in lieu of actually having a ‘happy place’, sitting in Shandong Mama and eating these dumplings is mine.

We ordered both the pan-fried mackerel dumplings and the pan-fried ‘Little Rachel’ prawn, calamari, salmon and chive dumplings. I like oily goodness as much as the next person, but the pillowy goodness that are the boiled dumplings at Shandong Mama is unmissable, so we ordered boiled zucchini, tofu, black fungus dumplings and boiled spinach and prawn dumplings. We had a pescatarian in our midst, if not I would have lobbied for the pork fried dumplings and the Melbourne dumplings, the latter of which has diced seafood, chicken mince, lemon rind, olive oil, parsley and *drumroll* garlic. With the side dishes of wasabi spinach salad and two variations of egg pancakes, we were set.

I always content myself with the fact that there has to be teensy weensy amounts of onion and garlic in these innocuous dumplings, but I have been made to loosen my belt on more than one occasion after visiting Shandong Mama. I was expecting the worst this time after my unnecessary mac and cheese-fuelled antics.

The mad scramble to make space for the onslaught of food was justified as plates started floating towards us only minutes after we’d placed our order. I’d already readied my bowl with a verifiable mix of vinegar, soy sauce and chilli oil – waiting eagerly to dunk the first unsuspecting morsel into my concoction. 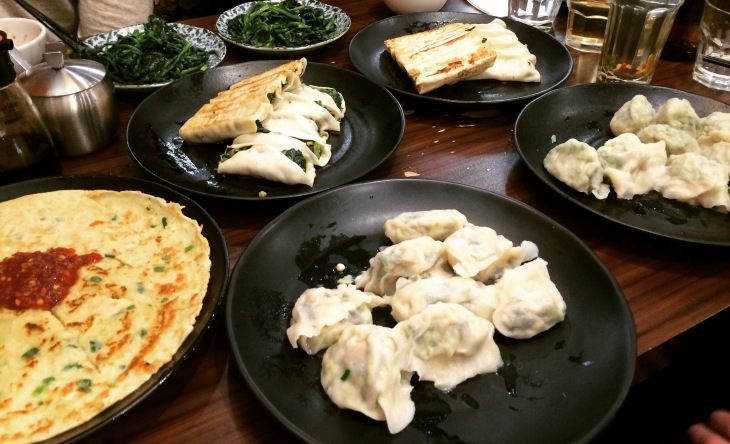 Each dumpling was as good as I remember. Unlike the pan-fried dumplings at other places, Shandong Mama’s ones are cannoli-like rectangular parcels. 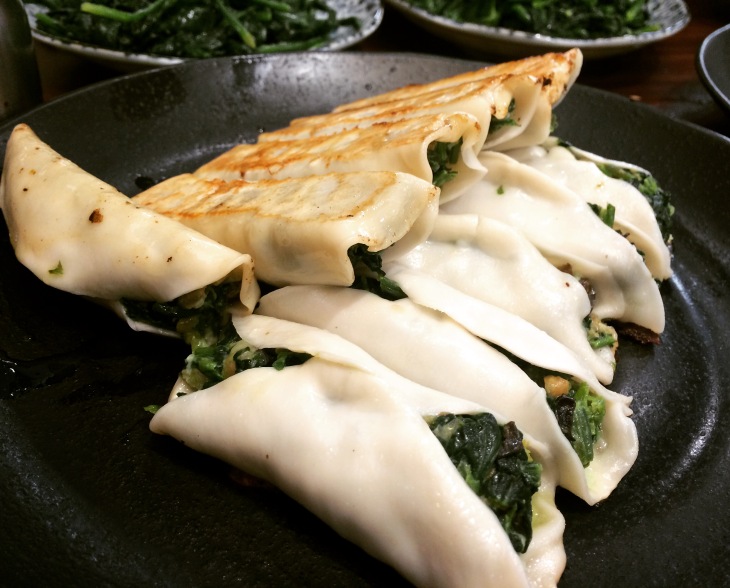 The boiled dumpling wrappers are made from scratch by Mama, and were ripe for absorbing the excessively spicy sauce that I’d levelled my bowl with. 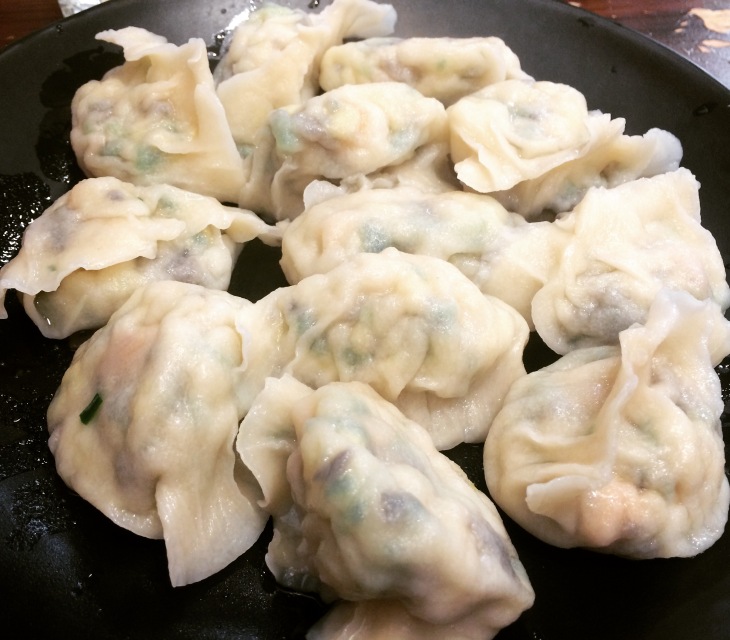 I was so preoccupied with devouring my fair share of the dumplings that I didn’t venture too far to the other side of the table where the wasabi spinach lay, but I had a few hasty forkfuls and it packed a punch. One of the egg pancakes was conveniently situated in front of me, but I didn’t care much for it. It was light and tasty with the addition of the chilli puree heaped atop it, but didn’t compare to my favourite spring onion pancakes at Korean restaurants. 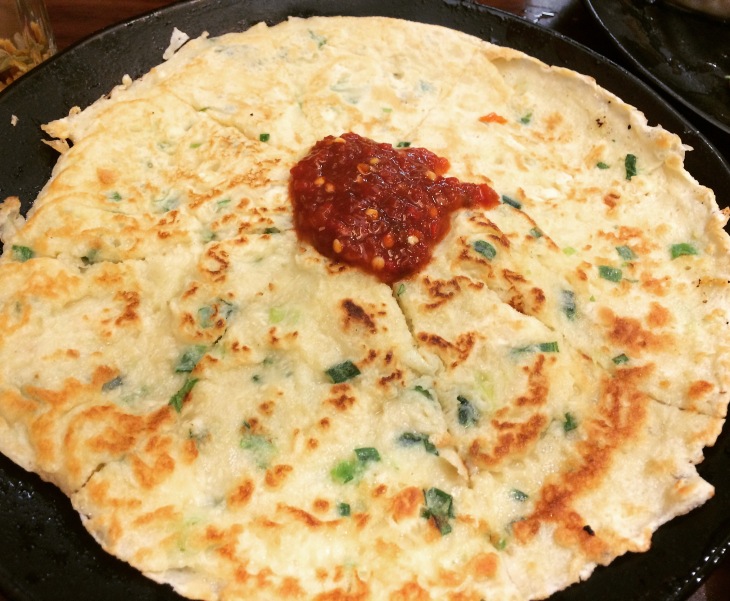 Note that there is usually a wait, although rarely a substantial one. We waited 10 minutes for a booth for five people, and let’s just say I was glad to be seated on the two-people side after I was done with my meal. My bloated stomach provided me with a temporary stopgap to prevent me from sliding off my chair, but it was an uncomfortable last few minutes. Note also that it’s a cash only place, to avoid any rudimentary demonstration of who owes what.

And if the quality of the dumplings aren’t enough of a pull, Shandong Mama doesn’t take to blasting ‘Happy Birthday’ every five minutes like that other dumpling-place-that-must-not-be-named down Tattersall’s Lane, which can only be a good thing 364 days of the year.

Shandong Mama is open from Monday to Saturday from 11am to 9pm.