What: The sole decent dumplings spot in the vicinity of North Fitzroy/Clifton Hill

Who: Mr Whatever Floats Your Bloat i.e. Mr WFYB, Monemoiselle and Mushy

It’s hard to miss anything about the Melbourne dining scene when you’re in the food paradise that is Malaysia, which is where I was recently, but dumplings are something that are consistently better in Melbourne than anywhere else I’ve been (granted I’ve never been to Hong Kong or China, so this is bound to change).

Visitors to Melbourne are constantly surprised when I include dumpling eateries such as Juicy Bao, Shandong Mama and Shanghai Street in my studiously curated ‘unmissable eating spots in Melbourne’ list for them, but I believe that dumplings are the next best thing in Melbourne after brunch and it costs half the price.

Which is why it’s such a bummer that there is a real dearth of dumplings in the inner north. Houhai Dumpling House is a rarity in the slew of cafes, Italian restaurants and pubs in the area, which may explain why it was packed to the rafters last Friday night.

Houhai is as no-frills as any good BYO dumpling place is – fluorescent lighting bathes the place in a dull glow, haphazardly hung paintings dance across the walls, and sparsely set tables pepper the relatively spacious restaurant. Mr WFYB and I were dining with our couple friends, Monemoiselle and Mushy, the former of which told me Houhai used to run this special promotion where you got to pocket one of the wall paintings if you spent above a certain amount in the course of a month – a surprisingly hard feat in the cheap and cheerful Houhai where a plate of dumplings don’t go above the $11 mark.

The menu is a proofreader’s nightmare – mushroom is spelt two different ways on the first page alone, and it takes some deciphering to figure out what ‘pork mins’ and ‘vegetarine nood’ mean, but we’re not here to exert our grammatical nous; we’re here for the pork and eggplant noodles. Ever since we tasted them, Monemoiselle – who used to live in France and is chic to boot – and I have been obsessed by these noodles and find every reason to re-visit Houhai when we can.

Mr WFYB solely orders from the misspelt section of the menu and goes for the ‘vegetarine nood’ and the pan-fried ‘bencured with celery’ dumplings while Monemoiselle, Mushy and myself decide to split the pork and eggplant noodles and boiled prawn, ginger and spring onion dumplings among us.

Multiple groups of varying sizes start streaming in at this point, which is a surprise to me because I’ve only ever been in Houhai when there’s one other occupied table. The lonesome waiter is getting quite harried at this point, but everything is progressing along smoothly, at least for the time being.

The boiled prawn dumplings arrive first, after which we quickly realise there are no bowls on our table – only small saucers that are not generally conducive for pooling together vinegar and chilli oil and dunking your dumplings in. After a few failed attempts to garner our increasingly stressed waiter’s attention, we receive our bowls and the dunking begins.

Houhai’s prawn dumplings are an exception to the prawn and chicken or prawn and pork ones that I usually order, and they deliver on every front. The skin is neither too thick nor thin and has structural integrity, with my generous spoonful of Houhai’s nutty and addictive peanut chilli oil gathering in the skin’s hidden folds and imbuing each mouthful with an umami flavour. The prawns used are probably frozen, but I like that I can discern each ingredient used instead of the indecipherable morsels that typically sit within dumplings. The gingery notes in the dumpling are strong and refreshing.

Mr WFYB’s ‘vegetarine nood’ arrives and my heart sinks as I catch his eye. Anyone who reads this blog knows that Mr WFYB’s pickiness with food is as renowned as George Calombaris’s inability to pay his employees. Soup is part of an ever-burgeoning list of no-go foods – that includes mayonnaise, any cheese that isn’t melted and beetroot –and ‘vegetarine nood’ turns out to be a vegetarian noodle soup. I quickly tell the waiter that we’d also like to order the spring onion and egg fried rice, hoping it’ll arrive before we finish our meal. 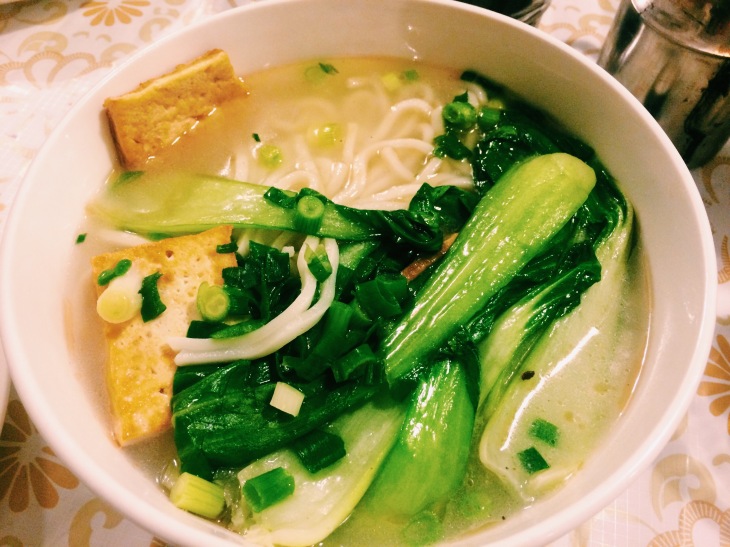 Mushy, who is forever known as such after bringing a plate of mushy peas to a potluck lunch, is perplexed by Mr WFYB’s dislike of soup but cordially volunteers to help him finish it. I have a taste and am not blown away – it’s definitely not the soup that will change Mr WFYB’s non-soup eating ways. The handmade thick flour-based noodles are the highlight of the dish, but the soup, while pleasantly salty, lacks depth of flavour. It is generous in its servings of greens and tofu, however, and tastes like something I’d be perfectly happy to have were I nursing a cold.

Thankfully for Mr WFYB, his beancurd and celery dumplings arrive and they are exactly what they promised to be. The dumplings are pan-fried to perfection, with their crispy, gently singed and adequately oily exterior giving way to a well-balanced mixture of diced tofu and fresh vegetables. These are some of the best vegetarian dumplings I’ve tried, and I’m tempted to order the other vegetarian options on Houhai’s menu the next time I visit. Unlike other dumpling eateries, Houhai has four different varieties of vegetarian dumplings. (Excuse the few dumplings pictured below – we were too hungry to think to photograph the dumplings when they arrived.)

And finally, our reason for being arrives. The pork and eggplant noodles is a traditional Beijing dish called ‘Zhajiangmian’, and it is potentially my favourite noodle dish after char kuay teow. I haven’t found many places that serve it in Melbourne (comment below if you know of somewhere!) and until I do, I’ll keep returning to Houhai. 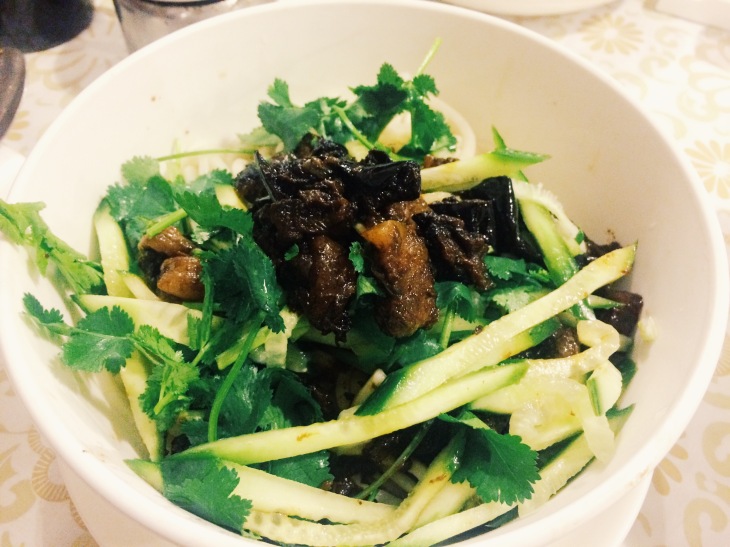 A rich and fragrant sauce comprising braised pork and caramelised eggplant cooked in a salty fermented soybean paste sits atop the same thick flour-based noodles that were used in Mr WFYB’s ill-fated vegetarian noodle soup, with julienned cucumber and roughly chopped coriander adding some much-needed greenery. Mixed together and topped with a few spoonfuls of chilli oil, this noodle dish is the perfect antidote to winter. The tender bits of pork melt in your mouth, compounded by the sweetness of the caramelised eggplant and the gentle bite of the chewy handmade noodles.

Mr WFYB’s fried rice has yet to arrive, and we’re beginning to notice the chaos unfolding around us. Every table is occupied, yet not many have been served – we see the perpetually grinning chef dash out a few times to relay a personal, heartfelt apology to tables that continue to wait, and the lonesome waiter forced to cancel takeaway orders after hapless diners are told how long the wait will be. A typical alpha male is forced to stride outside to cool down, while his partner explains to the chef that they won’t be paying for the meal because they’ve simply been waiting too long for their dishes. Unlike the bustling dumpling joints in Chinatown, Houhai has a staff of four, and they simply can’t handle the unanticipated Friday traffic – just another reason why someone else needs to set up a dumpling restaurant in the vicinity.

But besides poor Mr WFYB who is forced to say goodbye to his promise of fried rice and gets a halal snack pack after, we have a highly enjoyable meal. Each mention of ‘flour-based noodles’ has probably alerted you to the fact that I didn’t even try to follow my intolerances, but the ensuing three bloat score is worth it in this case. 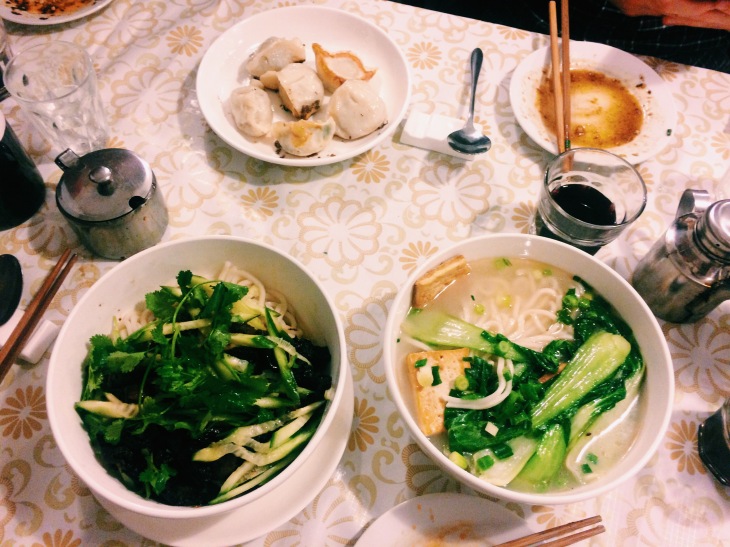 With a native Beijing chef at its helm, Houhai Dumpling House is the real deal. With only 10 dumplings per serving, Houhai prides itself on quality rather than quantity and each plate of handmade dumplings is a far cry from the generic ones served elsewhere. Eating here is an experience that doesn’t have to end in a huff, so as long as you arrive before 7pm on a Friday.