What: Pizza good enough to tempt me to leave Team Pasta

One of my favourite job interviews wasn’t one that resulted in me getting hired, but rather one where they took me out to Kaprica and paid for me to have a risotto. I think it was initially supposed to be a coffee, but it was around midday and they must have been feeling hungry/awkward that they asked me for a pre-interview coffee around lunchtime. Before I could say, “My weakness is that I am too much of a perfectionist…”, there was a pumpkin risotto in front of me. It was a rather fraught experience – trying to simultaneously chew, swallow and express my views about the state of arts criticism in Australia – but I do remember the risotto being top notch.

Surprisingly, I didn’t go back to Kaprica until recently; this time to commemorate the departure of a very clever friend who got accepted into a writing course in Oxford. Despite being known for its pizza, she swore by Kaprica’s pomodoro gnocchi and said it was the most pillowy bowl of goodness she’d ever had, evidenced by the fact that she’d been back three times in a month to have it. 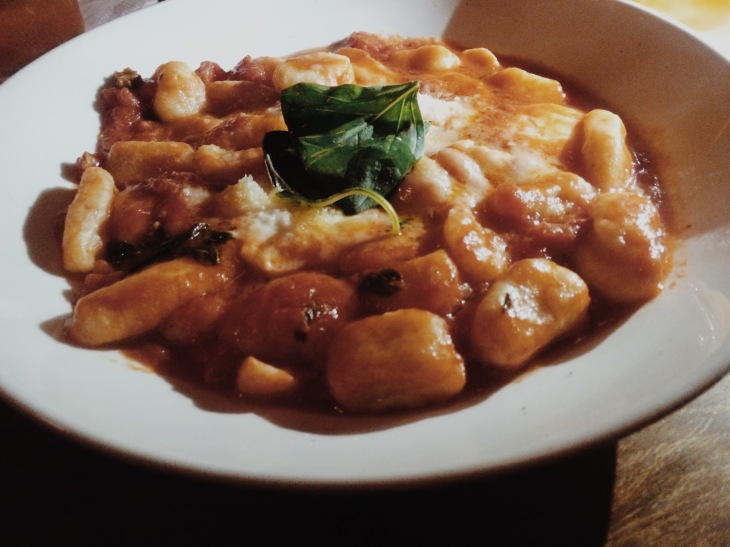 Our night got off to a rather rocky start. Showing up a full ten minutes before our 7.30pm reservation, I cheerily went up to the waiter only for him to sourly relay that we’d made a reservation for 7pm and that he’d given our table away. Not being able to vouch for my friend, I looked at him rather beseechingly until he reluctantly pointed me in the direction of an empty table.

I decided then and there that if I had my time again, I would go to Kaprica for a first date. My current partner and I went to Pellegrini’s, and while there’s nothing not to love about good old-fashioned Italian, prescriptive waiters and blackboard menus, jangled first date nerves coupled with our inability to spot the menu or flag down a waiter made the experience a more stressful one than it needed to be. Kaprica is quaint and cosy, with handwritten menus and wooden tables only adding to the allure.

Despite being very firmly in the Team Pasta camp, I couldn’t go past Kaprica’s varied selection of pizzas. I love me some carb on carb and I nearly went for the potato, caramelised onion and rosemary pizza, but I was too scared of our waiter to request the absence of onion, so I went for the mozzarella, broccoli, chilli and Parmesan pizza instead. Meanwhile, my non-gnocchi devotee friend went for the Asiago, swiss brown, enoki and oyster mushroom pizza.

I can’t confirm if there is a gluten-free option or not, as I conveniently forgot to ask, but there wasn’t any mention of it on the menu.

My pizza was every bit as good as it sounded, but I’m glad I didn’t order it at my interview because it wouldn’t have proven my CV-stated ability to multi-task. The perfectly crisp broccoli was complemented by the sharp Parmesan, with the sprinkles of chilli welcomed but definitely insufficient for my spice-obsessed ways. Not to mention the fluffy melted mozzarella, which formed the amazing base. It was one of the best pizzas I’ve had in a while. 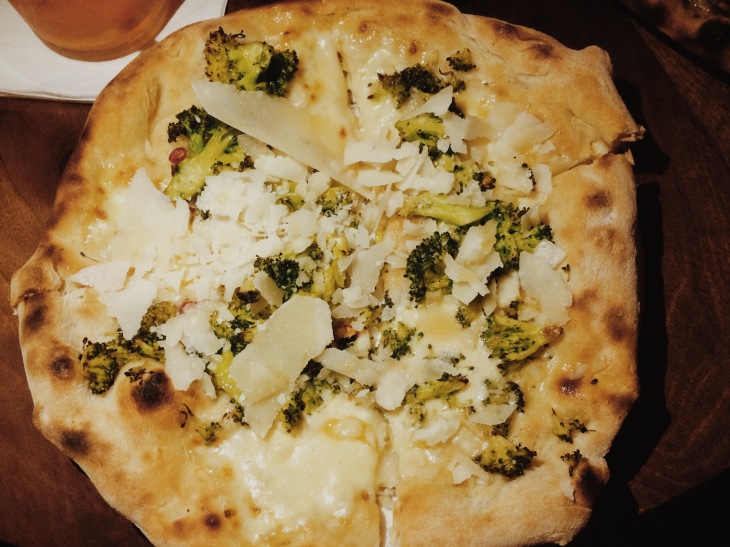 I was supposed to be sharing with my friend, but I got through three quarters of my pizza before I remembered. I did, however, get to try a slice of her mushroom medley pizza, and it was delicious. Mushrooms can be overwhelming, but the addition of three different types ensured a multitude of textures and flavours on the one pizza. 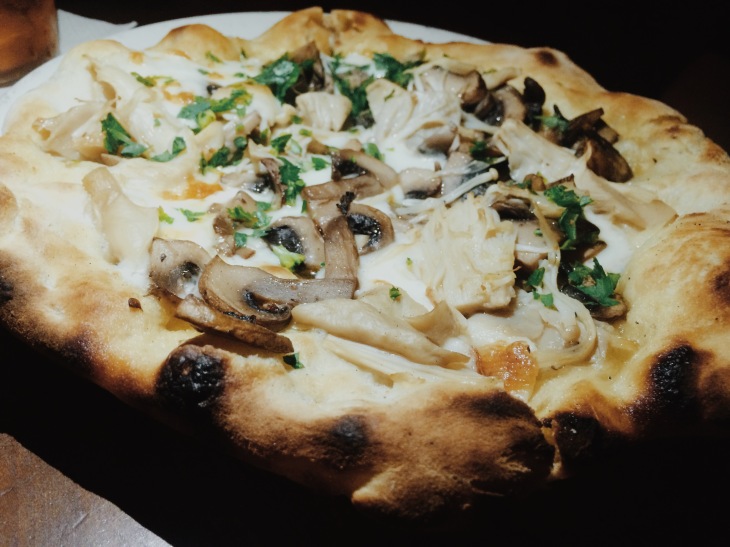 Our waiter’s frosty reception towards us didn’t abate throughout the night, and this is after I learned that my friend definitely made a booking for 7.30pm. After doing something close to an interpretative dance to get some chilli flakes, I was enjoying my short-lived victory until he returned to our table seconds later to seize the chilli from us. I don’t know about you, but I like to liberally drizzle chilli over my pizza as I’m eating, but his brusque demeanour called for a hasty chilli spill over my pizza and the results weren’t pretty. Which restaurant doesn’t have more than one jar of chilli?

He would have got dessert out of me had he asked, but it’s probably a good thing for my bloat score that he didn’t. In fact, I dedicate this one-bloat score to him – couldn’t have done it without him.

An Aperol Spritz and a pizza down, I opted for a red wine instead as the Melbourne weather took a turn for the worse, befitting our waiter’s expression when our two other friends joined us slightly later on.

Kaprica is positively cheap for how amazing their pizzas are – our small pizzas cost $15 but were enough to sate our appetites, even post-reluctant after-work gym session me. There is a selection of pastas and my pumpkin risotto is still on the menu, but my friend swears by the gnocchi as I do the pizza.