Who: Toasty with the Mosty, Little Fart

I’d eaten at Brunswick café Lucy Lockett before, but not since they’d changed hands and released a largely vegan menu. Toasty with the Mosty, who last appeared in this 2017 review of Tora Dumplings, and Little Fart, who blows around town being the youngest CEO I know at the age of 28, were more than up to a visit.

The café was quieter than usual when we visited, no doubt owing to the mass exodus that happens twice a year in the inner north when people who have no qualms with defecating into a hole abscond for Meredith and Golden Plains. Lucy Lockett has a front courtyard, where brunch-goers usually sit with their dogs, and an airy, light-filled indoor area. We sat indoors where the tables were unusually wide and where Beyonce was playing at a healthy volume, not so much that we were shouting over the top of it but enough to be a pleasant backing soundtrack.

I ordered a coconut milk latte ($4.50) and Little Fart ordered an iced latte ($4), both of which we enjoyed. While oat milk seems to be all the rage these days, it’s less common to find coconut milk in cafes and I enjoyed its subtle sweet creaminess in my coffee. It was less heavy and rich than a soy latte, which I’m not the biggest fan of.

Non-coffee drinker Toasty with the Mosty ordered an orange juice ($7) and promptly polished it off. 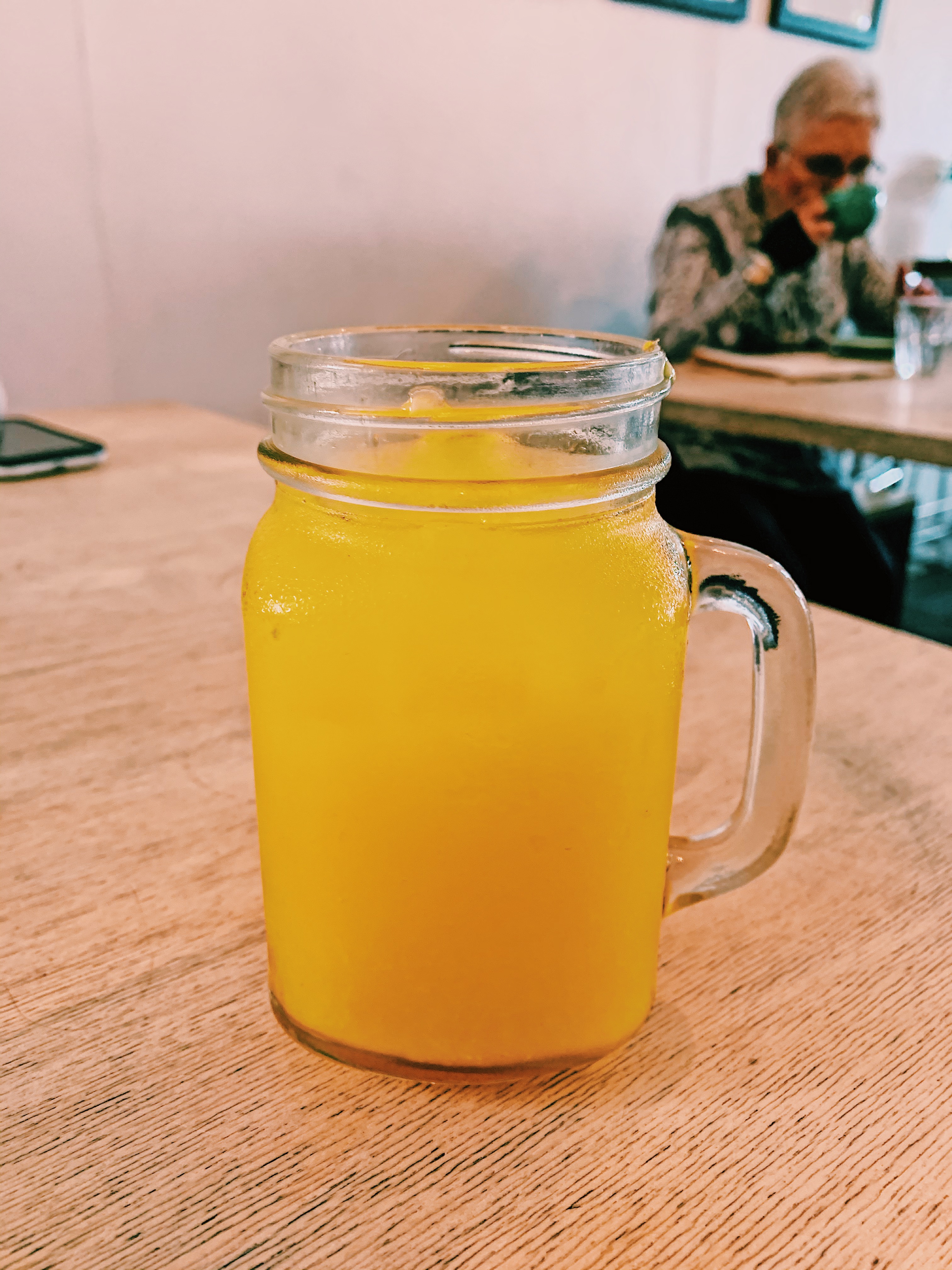 Lucy Lockett’s new menu (which isn’t yet reflected on its website) was divided into:

With the exception of dishes that had asterisks next to them, everything could be made gluten-free so if you’re gluten-intolerant, coeliac or wheat-intolerant like me, Lucy Lockett’s menu is easy to navigate.

We were understandably overwhelmed by everything on offer on a menu peppered with pop culture puns, and asked our delightful waitstaff for his recommendations, which roughly went along the following lines:

The tacos, aptly named ‘Por Qué No Los Tres’ ($18), sounded plain on page. The only descriptors on the menu were the fillings in them – sweet potato, tofu and cauliflower – but delightful waitstaff’s appetising description swayed me. And he was right – they were great.

The soft corn taco shells had been fried with a bit of oil and were perhaps over-fried because they were slightly hard and chewy, but I enjoyed them all the same. The fillings were largely disparate from one another. The sweet potato taco came blanketed in a thick red capsicum dressing and a sprinkling of fried chickpeas – I enjoyed the textural contrast between the soft sweet potato and the crunchy chickpeas, while the dressing was savoury and nutty. The tofu taco was perhaps my favourite. Encased in a salty crisp batter, the cubes of tofu were flavour-filled and hearty and when paired with the refreshing diced avocado and pickled cabbage, this taco was a perfect combination of flavours and textures. The cauliflower taco was perhaps my least favourite – the chunks of pineapple in it overpowered the faint savoury hits of cauliflower and pickled carrot and cabbage; I would have preferred less pineapple and more cauliflower. These are saucy tacos so prepare to end up with a pool of condiments in your plate – perfect for mopping up with the housemade tortilla chips.

Little Fart’s meal was delivered with the question “Who ordered the bitch?” owing to the name of her dish, ‘B#tch Peas’ ($21). She enjoyed it but had a few quibbles – the smashed peas were under-seasoned and served in a disproportionately large amount if compared to the other ingredients, and she thought the dish needed a relish due to the only wet components being the poached egg and the drizzles of pesto (the other components were three hash browns, halloumi, rocket and feta). It became dry towards the end when she was left with a pile of smashed peas.

Toasty with the Mosty ordered the classic scrambled eggs on sourdough with sides of smashed avo and hash browns ($22). One serve of hash browns at Lucy Lockett is priced more than usual at $6 because it’s the equivalent to three hash browns, and Toasty with the Mosty kindly bequeathed one of them to me. It was even better than the McDonalds variety (which has its time and place) – crisp on the outside but pillowy, moist and well spiced on the inside. It tasted almost as if someone had taken a chunk of bubble and squeak and deep-fried it.

The minor annoyance of not allowing bill splitting on weekends aside, Lucy Lockett is a great brunch place that caters to all palates – from basic bitches and plant eaters to those after inventive big breakfasts that include deep-fried oreos and Persian fairy floss. Perhaps don’t go if you’re in a rush – our coffees took surprisingly long to come, and the dishes took more than half an hour to arrive. I ended up with one bloat, potentially due to the red capsicum dressing – red capsicum is a high-histamine vegetable – and I may have had to briskly walk home as the effects of my one coffee made themselves known, but it was a largely bloat-free brunch. Lucy Lockett’s menu changes regularly, but this iteration is a winner.

Lucy Lockett is open every day from 7am to 3pm.