What: A pretty good introduction to Melbourne’s brunch scene, in that I was uncomfortably perched on a stool and ended up bloated

Before I launch into my first WFYB review in a while, I have a pretty momentous announcement to make: I am not FODMAP-intolerant, contrary to everything I’ve had you believe. Five years of abstaining from onion and garlic to varying degrees has been all for nothing. I will be updating the ‘About me’ section of this website in the upcoming weeks because my personal brand has turned out to be predicated on a lie. But the name of the blog remains – I still get bloated and all too often.

After embarking on a month-long elimination diet that required me to abstain from all FODMAPs and eating out (you can visit my Instagram to see my often disastrous attempts to stay FODMAP-free), you’d expect me to be bouncing off the walls with a newfound vigour for life. Sad to say, I was as bloated and as ill as ever, which prompted my dietician to diagnose me with a completely different intolerance: the histamine intolerance.

As much as I’m overjoyed to have onion and garlic back in my diet, this histamine intolerance appears pretty damn restrictive. Basically, a histamine intolerance involves a disparity between the supply and breakdown of histamine (a component of stomach acid that helps us break down our food) and gives rise to a variety of symptoms – some of them are similar to what happens when a FODMAP-intolerant person has garlic prawns or onion rings, such as bloating and diarrhoea, but there are additional symptoms too like red eyes, itchiness and a runny nose, all of which I’d been struggling with in recent years.

The cure? A low-histamine diet, which cuts out things I’d been having on a daily basis: almond milk, tomato, eggplant, spinach, olives, all manner of cured meats, wine (goodbye mulled wine, truly the best thing about winter), aged cheeses (goodbye grated parmesan on everything), chocolate (meh) and many other things. It is both a boon and a blow, and I am still processing the new list of ingredients I can and cannot eat.

Being completely ill from a lifetime of eating high-histamine food without realising it did not deter me from having brunch with High-Flying Banker – especially because it was only my third meal out after surviving for close to a month on my own food. Let’s just say I was ready for some corn fritters, which is exactly what I ended up ordering.

There was a queue formed outside Hash Specialty Coffee, which did not augur well, but I was seated immediately when I said it’d only be me and my friend High-Flying Banker, who was running late because she was washing her hair. True story. We met in Year 12 when washing one’s hair felt like less of a chore, but instead of choosing the perpetually painful and underpaid profession of writing, High-Flying Banker went on to become exactly that.

My relief quickly turned into consternation, however, when I was shunted between two pairs of people and forced to perch on a stool, which everyone who knows me knows is my least favourite type of seating. I made do with the scant space by dumping my bag underneath and tottering on the edge of my stool, heavy coat in lap, like a disgruntled toddler. High-Flying Banker soon arrived and resorted to placing her bag and coat on our table, equally unimpressed as I was with the lack of space.

Hash Specialty Coffee is one of those Melbourne cafes where pomp is the word of the day, with photogenic dishes that cost an arm and a leg but are ordered regardless because of how good they look when captured on an iPhone. You only have to look at the café’s logo – a hashtag – to see how this motto is exemplified in everything it does. Take the $7 Matcha Flossy, a stock-standard cup of matcha served underneath a cloud of fairy floss, or the $7 Hash Hot Chocolate, a Mork dark chocolate also served underneath a cloud of fairy floss.

I didn’t know if fairy floss was in my new list of ‘must avoid’ ingredients but it wasn’t worth the bloat (or the price tag), and so I went with a soy latte (which took ages to come) and celebrated my ability to eat corn again by ordering the deep-fried corn fritters with avocado puree, wild rice and herb salad, romesco and a poached egg. 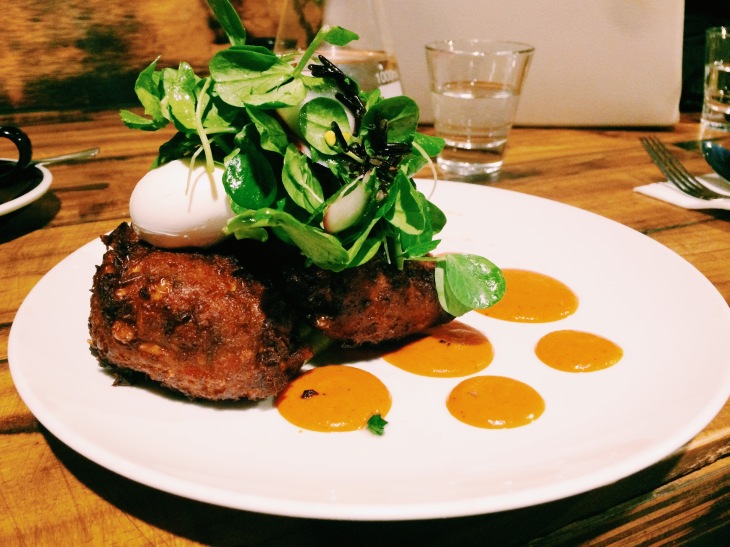 My dish was enjoyable, if only for the four jumbo-sized and doughy corn fritters that arrived. I attacked these with the reckless abandon of someone who hasn’t eaten corn fritters in five years, but was less taken by the wild rice and herb salad – which turned out to be just a herb salad with a sprinkling of wild rice – and the overcooked poached eggs. The avocado puree was pleasant enough, but I would have preferred something less creamy and more tart to cut through the heaviness of the corn fritters. I avoided the accompanying Catalonian sauce romesco, which has tomato in it, in deference to my new intolerance.

Nothing was particularly wrong with Hash Specialty Coffee, but I won’t be back in a hurry. Maybe I’m too old and cynical for the hype of Melbourne brunch, or maybe I just prefer places I can settle into comfortably instead of balancing precariously on a high stool wondering if the person next to me is privy to everything I’m saying. Hash Specialty Coffee was teeming with people, just not stool haters such as myself who ended up having to rush home because their stools were threatening to unspool.

Hash Specialty Coffee is open from 7am to 4pm Monday to Friday and from 8am to 4pm Saturday to Sunday.