What: Not what certain people would term a “normal” breakfast

It takes a special kind of privilege to term a breakfast that consists of rice or noodles “weird” when nearly half the world would eat breakfasts that comprise exactly this – though this is often the reaction I get when I tell people what I grew up eating for breakfast. Although cereal and eggs on toast are popular the world over, so is a bowl of rice, soup and 2­–6 side dishes if you’re in Korea, idli and dosa if you’re in southern India, nasi lemak and roti canai if you’re in Malaysia, dim sum if you’re in southern China and Hong Kong, xiaomian if you’re in northern China, and steamed rice with miso soup and a side of grilled fish if you’re in Japan. I could go on, but you get my point.

So although what Magic Mountain Saloon serves for breakfast may be considered an anomaly in Melbourne, it has quickly become one of my favourite brunch spots precisely because you can order shrimp rice or a chicken rendang toastie from 7am.

With everyone in my trusty brunch club hailing from the north, the south or the west, the city was the most convenient option. Travelling into the city is depressing at the best of times, particularly when you commute into it five days a week for work, so I salvaged things by suggesting Magic Mountain Saloon.

I scoured the menu with my new low-histamine hat on. The baked eggs were out due to the pork sausage and passata. The sticky pork sticks and shrimp rice were out due to the shrimp. The chicken, corn and mushroom-stuffed omelette was out because of the mushroom. And so on so forth. Eventually I settled on what I always order when I visit Magic Mountain Saloon – the coddled egg and chicken ball congee (a type of rice porridge for the unacquainted) with condiments.

After I forced everyone on the table to order different dishes for the sake of you, dear readers, only to have three of them order the same thing, our dishes soon arrived. 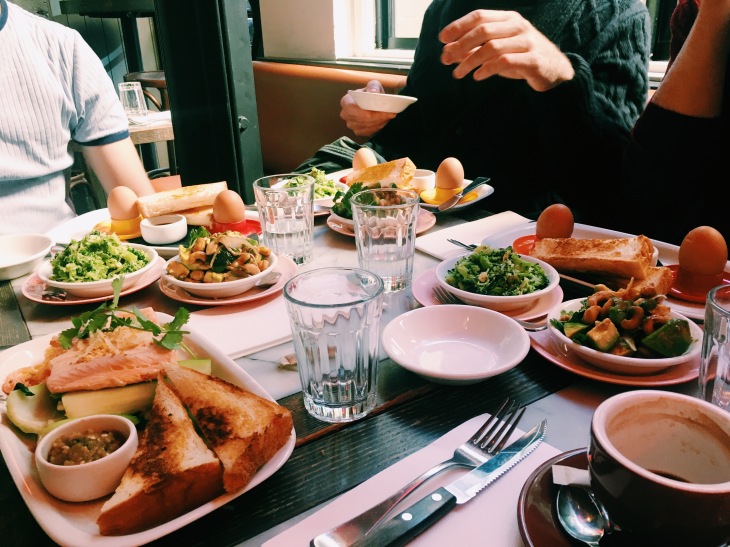 The three culprits were Oxford Brosé, Mister Fantastic and New Northsider, and they’d gone for the boiled eggs, smashed broccoli, avocado and cashew salad, chilli soy and fairy toast. I would term this dish an Asian version of boiled eggs and soldiers – the soldiers in this case were thick slivers of buttery and pillowy toast (much like what you find in parts of Asia and nothing like Australia’s fairy bread, despite the name) and the chilli soy was spicier than the boys expected. 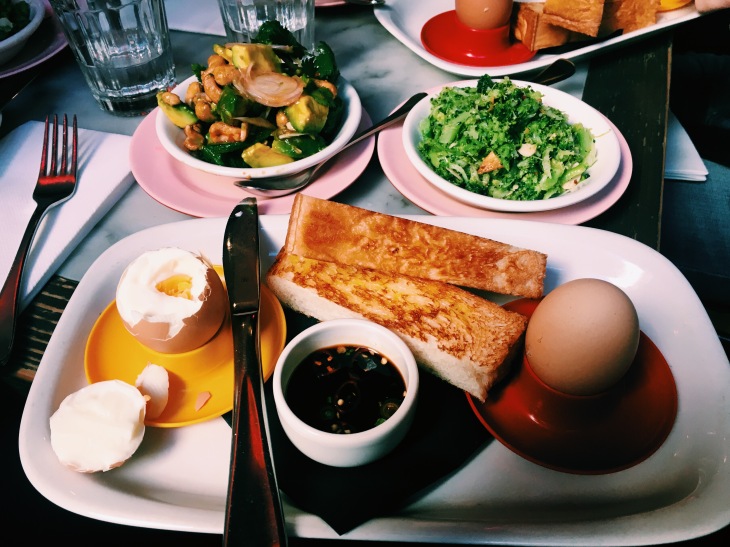 Instead of smashed avo, they got smashed broccoli, while the avo was sliced into thick chunks and drizzled with soy-marinated cashews and onion. They really enjoyed the DIY aspect of their meal and were more than sated by the two eggs, though some of their attempts to de-shell their eggs reminded me of Armie Hammer’s efforts in a breakfast scene in Call Me By Your Name (I cannot find this scene online, so you’ll just have to watch it if you haven’t already).

Conflicted Pescatarian, who has become more confused about his disavowal of meat in recent times, stuck to his pescatarianism by ordering the ocean trout with coriander and ginger-scrambled eggs with fairy toast. He had nothing but praise for this dish.

Resident Photographer, who was responsible for many of the beautiful photos in this post, ordered the chicken and kaffir lime scotch eggs with tamarind sauce and onion rings. Scotch eggs are hard-boiled eggs wrapped in sausage meat, coated in breadcrumbs and deep-fried, meaning they’re typically small, but these scotch eggs were generously proportioned with a thick second layer of kaffir-lime spiced chicken mince. The inclusion of chicken mince instead of usual pork mince as well as the tanginess of the tamarind sauce gave this dish a point of difference, while the tempura-battered onion rings culminated in an exceedingly rich dish – perhaps too rich in Resident Photographer’s mind, though he did enjoy it. 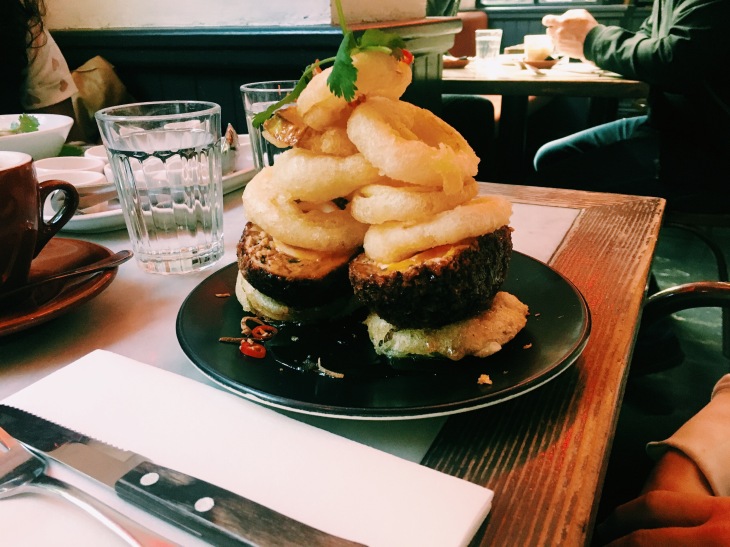 I promptly deposited my supplied condiments – sliced spring onions, cut red chilli, white pepper, sliced ginger and tofu – into my bowl of congee, resulting in a deliciously spicy and salty concoction of pure comfort food. I was plagued with a moment of indecision when it came to eating the anchovies, knowing fully well that they’re not allowed on the low-histamine diet, but gave in to temptation after 10 seconds of resisting. I was glad I did this as a) the crunchy tips were a textural delight and b) I escaped with zero bloats so I can’t be that allergic to anchovies.

I will always sing Magic Mountain Saloon’s praises, as I will any Asian breakfast, even (or maybe especially) when faced with the whitewashed view that such dishes are outside the narrow frame of reference of what constitutes breakfast in this country. If you are after similar breakfasts, I can also suggest the sublime One Yada Thai in North Richmond.