What: My last fine dining experience before the dreaded elimination diet

Fine Dining Club hadn’t met since our inaugural dinner at Ides months ago, so we thought – what better time to resuscitate it than a few days before my elimination diet was about to start? For those who haven’t been following my travails on Instagram, I’ve been getting increasingly sick from following my intolerances in a half-assed manner, so much so my dietician has put me on a three-week elimination diet which I’m currently following where I’ve been advised to stick to 100% homecooked food free of FODMAPs followed by a reintroduction period where I will reinstate high-FODMAP foods and ascertain – once and for all – what it is that makes me descend into a farty state. Needless to say, I set about getting as much high-FODMAP food into me beforehand (probably not what my dietician would have advised) and our Fine Dining Club excursion to Atlas Dining was part of that.

True to its name, Atlas Dining explores the cuisine of a different country that its young chef extraordinaire Charlie Carrington has visited and rotates its menu every four months. This sounds like a recipe for disaster – who could possibly specialise in that many cuisines and execute them without evoking mediocre buffet spreads? – but the plaudits Carrington has garnered has proven that he is up to the task. From Mexico and Israel to Korea and Vietnam, Carrington has journeyed to disparate corners of the world to devise an oft-changing menu with flourishes that are very much his own – wood fired flavours owing to his use of a custom designed wood oven and leather pouches that contain all the cutlery you’ll need from the outset.

When we visit, it is to sample Carrington’s Peruvian menu but if you’d rather taste the full gamut of the cuisines he dabbles in, his new venture Colours of Atlas serves five dishes where each is inspired by a different country.

The first inkling I was going to enjoy Atlas Dining was when I made a reservation to dine there – they only accept online reservations and instead of then nullifying that by giving you a call to confirm your booking, they send you a text where you’re only required to reply with a Y or N to confirm your booking. Such lack of human interaction brings a tear to my eye and I can only hope that all other restaurants soon emulate this.

Atlas Dining is situated on a less frequented strip of South Yarra between Punt Road and Chapel Street. As if to echo that lack of ostentation, Atlas Dining is warm, laidback and cosy – dim lighting illuminates the timber upholstery and leather booths of the 50-seater restaurant in a light glow, and waitstaff are attentive but leave you largely to your own devices. Our waitstaff asked me if I wanted the chef to cater to my fructose intolerance – I evidently must have mentioned it in the online reservation form – but this was before I discovered I’d have to eat three weeks of my own cooking, so it was a firm no from me.

Unbeknownst to us, Gingko Leaf Girl had already visited Atlas Dining twice –once was even to eat from the very same Peruvian menu Fine Dining Club was sampling on the night we visited. She insisted it was so good she wanted to try it again and such is Carrington’s wizardry, the menu was markedly different to when she visited.

Being the arts workers and former arts workers that we were, we were leaning towards the $70 per person tasting menu, until our waitstaff kindly informed us that it was just that – a tasting menu that wouldn’t touch the sides of our stomach upon completion (he didn’t say this exactly, but I caught his drift – we wouldn’t be full after). Unwilling to pay $70 to be merely sated, we shelled out the extra $25 per person to incorporate an additional two ‘Nikkei’ dishes, which I would highly recommend because these two dishes were some of the best things I’d ever tasted. Translating into ‘beautiful love child’, Nikkei is an amalgamation of Peruvian and Japanese cuisines, owing to the large Japanese immigrant population that has resided in Peru since the late 19th century. Nikkei is said to be the latest gastronomic trend sweeping the world – you heard it here first.

Beer Jenga Master – whose powers of balance are, as previously stated, unparalleled – had a glass of Atlas’s cheapest sparkling while teetotallers Gingko Leaf Girl and I ordered non-alcoholic Peruvian Chica Morada, which turned out to be a refreshing and tasty purple corn drink. Tempted as I was by the Atlas Pisco Sour, I wasn’t about to shell out $21 for it. Just as the food menu changes every four months, so does the drinks list – inviting a curated experience of not only the food of Peru, but the drinks of Peru.

Without further ado, our waitstaff served up our first dish. A cutesy menu clad in the deep burgundy of the Peruvian passport was our guide as to what we were being served on the night, but the scant detail on it coupled with the waitstaff’s lengthy descriptions meant Beer Jenga Master, Gingko Leaf Girl and I had to divide the task of listening among us to catch mention of every ingredient and preparation method that was used. We did a fairly admirable job – you be the judge.

There is perhaps no dish more synonymous with exported Peruvian cuisine than ceviche, and that was our first dish – specifically, kingfish ceviche that had been cured in pisco for five hours served alongside a tarragon emulsion, slivers of limey grapefruit, kombu and grilled witlof. Delicately parcelled into a round stack in the middle of our plate, the kingfish was incredibly fresh and tasted entirely of the sea (in a good way, although Beer Jenga Master found it too fishy) with the witlof adding a welcome bitterness. 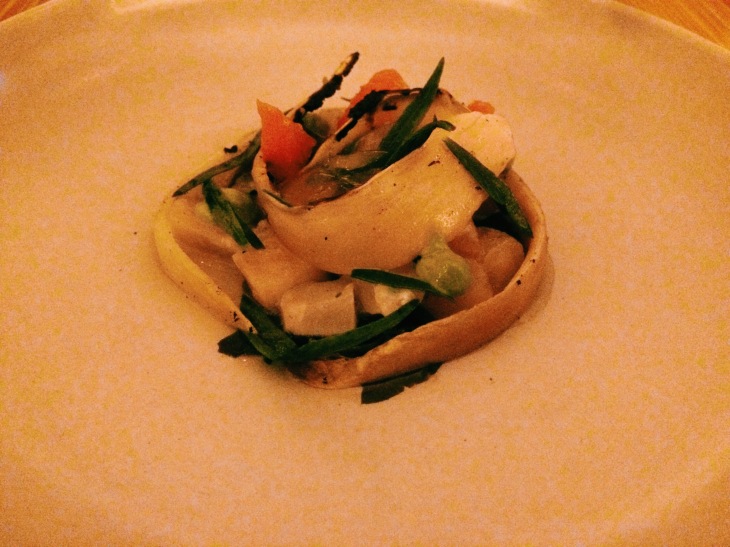 Our second dish was one of the Nikkei additions and it was a personal highlight. Presented in an earthy bowl, browned crisp lace from potsticker dumplings blanketed a king prawn submerged in a salted duck egg yolk and chilli miso thickened sauce. This was a tactile dish as we were encouraged to suck the head of the king prawn and dispose of it in a saucer that sat in the middle of the table before proceeding to eat the rest of the dish. The umami savouriness of this dish was simply spectacular – the smooth and velvety sauce was rich and addictive (I could have eaten an entire bowl of this), while the prawn morsels were perfectly cooked and an ideal complement to the dish having absorbed all the heady flavours of the sauce. I may never taste this again because of Atlas’s rapidly evolving menu, and that thought makes me sad.

The second Nikkei dish arrived in quick succession: quinoa crisps with potato noodles, mussels and smoked mussel cream, and Brazil nut pesto. Much like the sauce in the last dish, the sharp smoked mussel cream tied all the ingredients in the dish together. Quinoa had never tasted better than in the chip-like form it had been rendered in here, and the dried potato noodles were thin and stringy – I was expecting something like Korean japchae (sweet potato noodles) but these weren’t as slippery nor thick. 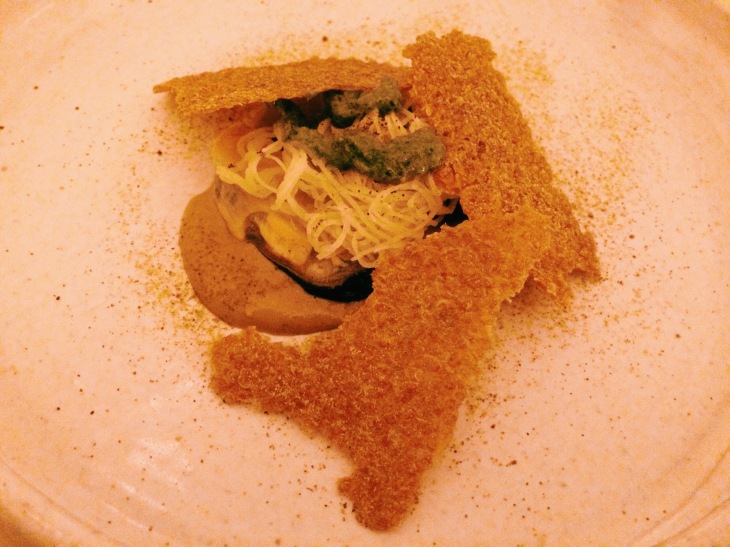 We were back to the regular tasting menu with the next dish – eggplant with crisp tostadas, corn powder, goat’s cheese, sunflower seeds and Peruvian black mint. This dish was a textural journey, with the crunch of the tostadas and the sunflower seeds as well as the bitterness of the black mint melding together perfectly with the softness of the eggplant. It was Beer Jenga Master’s favourite dish of the night.

But barely had we finished with this were we served the next dish – seared pork fillet prepared with all parts of a beetroot (including its leaves) and a Peruvian seasoning of cumin, garlic (eep – concrete proof that I was going to suffer later) and paprika. It was a visually stunning dish due to the thinly sliced slivers of beetroot and the more lurid red beetroot cream. The cumin notes in the seasoning and the chargrilled nature of the pork fillet very much reminded me of chicken tandoori – this dish was, as a result, immensely comforting and familiar.

Up to this point, we weren’t that full and were joking about doing a fast food run later (or maybe that was just me – I once went to Hungry Jacks after dining at Nobu because I was still famished). The next dish, and the last savoury one of the night, put paid to those worries. Generous chunks of quail on the bone were presented with pureed parmesan and walnut sauce and soft cubes of sweet potato. As with all the other dishes, the accompanying sauce was the highlight, and the decision to pair the tender quail with the saccharine notes of the well-cooked sweet potato yielded an explosion of flavours – each of them welcome.

We’d had such a good run with the savoury dishes – particularly the beautiful Nikkei ones with their complex flavours – but didn’t enjoy the dessert as much. A Brazil nut sponge cake that had been soaked in what I think was pisco and paired with caramelised banana was too alcoholic and bitter in turns. I am famously known for eschewing dessert in favour of another entrée, so dessert was never going to be my highlight, but Beer Jenga Master and Gingko Leaf Girl agreed that this wasn’t to their taste either.

I had already begun to feel my stomach swell as I came to the sudden realisation that I had forgotten to pop a Lactofree pill before dessert, which would have almost certainly contained dairy. This only worsened the next morning, as my three-bloat situation turned into a fully-fledged four bloats.

But I regret nothing. As we speak, I am subsisting on a diet consisting 100% of my own cooking and the kindness of friends and family who dare to cater to my restricted diet (to keep abreast with how I haven’t managed to poison myself, visit Whatever Floats Your Bloat’s Instagram), but the time spent toiling away in a kitchen that I’ve barely used before is made bearable by the thought of Atlas Dining’s salted duck egg yolk broth and king prawn dish that I was lucky enough to try.

The next cuisine Carrington is basing his eclectic menu around is French. My elimination diet will be over by then, so I may well treat myself to a seven-course dinner prepared by one of the most exciting chefs in Melbourne.

Atlas Dining is open from 6pm to 11pm Tuesday to Thursday and from 5.30pm to 11pm Friday to Saturday.