Where: Handsome Her, 206 Sydney Road Brunswick

What: Vegan brunch food that men are obliged to pay more for

I first learned about Handsome Her when it made headlines for charging men an 18% surcharge to account for the gender pay gap, proceeds of which go to women’s services – a noble endeavour that I am 100% in favour of. Playing my role in the global fight for equality, I lured five male friends to the café, only to find no mention of the 18% surcharge anywhere. Whether the café has stopped promoting the surcharge or whether it has been completely removed was unclear, but I was severely disappointed at the fact that my male dining companions wouldn’t be paying more for their brunch.

But Handsome Her isn’t merely distinctive for its progressive gender politics; it boasts a highly inventive vegan menu that won’t leave you craving eggs or a full-cream latte. The menu was extensive, even insofar as the drinks menu. Lactose-intolerant people i.e. me were spoilt for choice with four non-dairy alternatives available – soy, almond, coconut and macadamia. Having tried every one except for macadamia, I went for a taro latte with macadamia milk. The waitstaff informed me that the taro latte was in fact devoid of caffeine, but easily rectified this by adding an espresso shot to it. The result was a sweet purple-tinged drink – the saccharine notes due to the macadamia milk, and the purple colouring due to the taro. I’m not usually one to add sugar to my coffee, but I enjoyed this surprisingly sweet morning beverage.

If you’re not a fan of a vegetable-based coffee, there’s charcoal lattes, turmeric lattes, smoothies, crushes and even alcoholic beverages if you’re hoping to have drunch instead of brunch.

Dishes are aptly named after local and international powerhouse women – from leader of the Victorian Greens, Samantha Ratnam, and indigenous feminist Celeste Liddle to former first lady Michelle Obama and North Korean human rights activist Park Yeon-mi. Most of the dishes are gluten-free or have the option to be made gluten-free.

I went for the Yoko Ono, a dish comprising polenta-crusted eggplant, black bean quinoa, roasted broccolini, (faux) chicken nuggets, avocado puree, goma emulsion and spicy rice crackers. Further sleuthing revealed that goma is not only a famous art gallery in Queensland, but also a sesame-based Japanese dressing – perhaps the biggest nod to Yoko, who is both an artist and Japanese. I asked for this to be made without onion and garlic, which the waitstaff happily complied with.

The Yoko Ono was an incredibly pretty and meticulously constructed dish. Smears of goma and avocado puree gave the dish an artistic flourish, while the richness of the crispy medallions of crumbed eggplant and addictive fuggets (what I call faux chicken nuggets, if you’re a close follower of this blog) were offset by the freshness of the black bean quinoa and crispy stalks of roasted broccolini. The spicy rice crackers, which tasted exactly like the South Indian rice crackers of my childhood, conjured up memories of my mother’s kitchen.

Mister Fantastic, who’s the designated selfie-taker when the two of us want to flaunt our good looks due to his exceedingly long arms, also ordered the Yoko Ono, but found the crumbed eggplant medallions too greasy, though he enjoyed the rest of the dish.

Eco Warrior had found his home in Handsome Her. The café is strictly environmentally focused in the conception of its menu, but also in how it doesn’t hand out disposable coffee cups – if you’re ordering a coffee on the go and don’t have a reusable cup, you have to stand at the café’s built-in espresso bar and have it out of a mug off the café’s impressive Emergency Mug Wall.

Eco Warrior, who is famous for his sweet tooth, went for the Michelle Obama, which comprised brownie hotcakes, caramelised saffron bananas, peanut butter mousse, salted caramel brittle, lemongrass-infused coconut cream, matcha popcorn and strawberry baobab (had to look this up) ice-cream. What stopped this from being overly sweet was the peanut butter mousse, which Eco Warrior said added a savoury element to the dish.

With three among us ordering the same thing, I beseeched Conflicted Pescatarian – who only eats seafood and vegetables, but refrains from eating octopus and squid because they’re too intelligent – to order the burger menu item Rosa Parks, after we caught sight of a towering sesame seed-studded charcoal brioche bun on someone else’s table. Alas when the Rosa Parks arrived, we realised it wasn’t the charcoal brioche bun that we’d been lusting over, but a beetroot bun with different condiments. Conflicted Pescatarian’s stunning red burger bun sandwiched layered mushroom, vegan béchamel and mozzarella, pea puree, a five-spice crumble, and tomato almond feta salad. He greatly enjoyed his meal, while secretly nursing the disappointment of not getting the charcoal brioche burger. 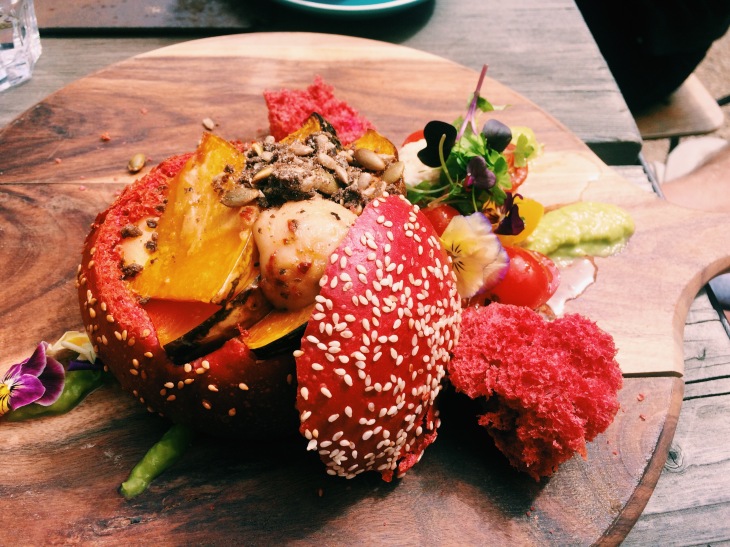 The charcoal brioche burger was on a specials’ menu that was unbeknownst to us – dammit! Luckily, Singing Chef, who had travelled all the way from Tasmania to guest star in this edition of Brunch Club and serenade us with her lovely voice, spotted the ‘Kelis Burger’ on the specials’ menu and subsequently ordered it. It consisted of faux pulled pork – which was actually jackfruit marinated in a smoky barbecue sauce – guacamole, rainbow slaw, mayonnaise and grilled pineapple. Drawing on her commercial cooking expertise, Singing Chef told us jackfruit is often used instead of pork due to the meat-like way in which it shreds. It did look uncannily like pulled pork. And in what would have been an instant five bloats for me, the burger was topped with three onion rings. Singing Chef remarked how light she felt after her shredded jackfruit burger, but that didn’t stop me from stealing a few of her fries that she’d ordered on the side.

Resident Photographer ordered something off the specials’ menu named after Moroccan feminist writer Fatema Mernissi and it was, by far, the most aesthetically pleasing dish. A saucer of buckini tahini speckled with pistachio dukkah sat framed by Dutch heirloom carrots, roasted cauliflower, fresh tabouli, candied stripped beets, pumpkin hummus and beetroot-infused bagel slices. Although Resident Photographer enjoyed the various textures and flavours, he wasn’t full by the end of it. 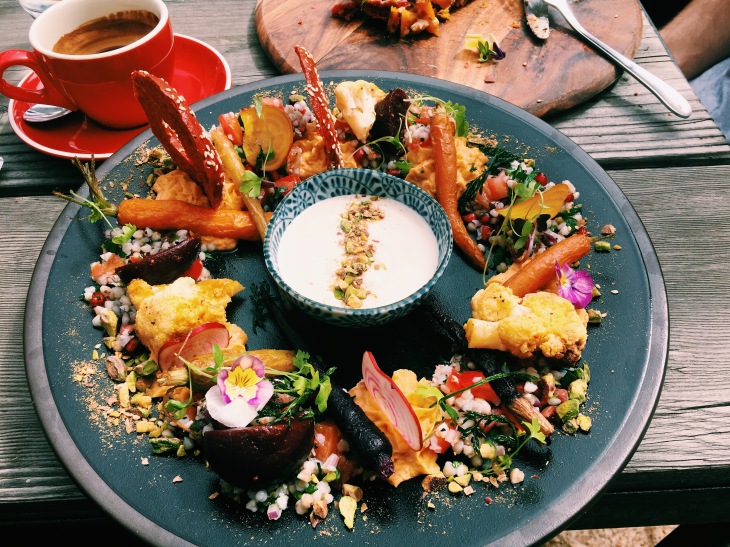 A common sentiment in the group, and one that was shared by me, was how collectively unbloated we felt after our meals – everything was served in the exact right proportion, and the freshness of the produce shone in every dish.

With its avowed focus on vegan food and numerous gluten-free options, Handsome Her is the perfect candidate for my new favourite zero-bloat place in Melbourne.

Handsome Her is open every day except Monday from 9am to 3.30pm.