What: Pizzas that will put Lacteeze out of business

Who: Soy and Pulses Float My Bloat

The 3 devoted readers of this blog will know that I’m firmly #TeamPasta, but vegan pizzeria Red Sparrow Pizza all but negates my need for Lacteeze pills and so I had to try it.

Red Sparrow is located past Johnston Street on the quieter end of Smith Street, not that you’d know it from the crowd of people crammed into the restaurant’s long and narrow confines. Thankfully we’ve made a booking and so I swan past disgruntled hungry diners to claim my two-person table near the front of the restaurant.

My friend Soy and Pulses Float My Bloat is the perfect dining companion for such a place because they, like me, inundate the patient waitstaff with numerous questions about what they can order without swelling to the size of a balloon. Because Red Sparrow is a vegan pizzeria, many of their cheeses are made of soy, which Soy and Pulses Float My Bloat has to avoid – they go for the Capricciosa, a pizza on the specials board, which is topped with fake ham, mushrooms, olives, artichokes and coconut milk-based mozzarella.

Let’s talk about what I would have gone for if I didn’t have the intolerances that I so sadly do. The HS Pizza, also one of the blackboard specials on the night we visit, combines chips and vegan cheese with kebab-style (fake) meat, aioli, sriracha and barbecue sauce. My second option would have been the mushroom pizza, which has a white base topped with two different types of mushrooms – porcini and swiss brown if you are wondering – caramelised onion and truffle oil. For the former pizza to be suitable for me, I’d have to have chips on a gluten-free base and for the latter, I’d have to have truffle oil and sprigs of thyme on a gluten-free base. Appealing, but no.

I figure it’s a waste to disobey my intolerances in a place that is so mindful of what ingredients it uses, and so I dutifully ask the waitstaff which pizza can be prepared without onion and garlic. He tells me the chefs have concocted an onion and garlic-free batch of napoli sauce for the tomato base pizzas so I can order any of them, but I have to sadly steer clear of the fake meat because they have onion and garlic powder in them. I decide to go for the next best thing – a potato pizza. The Bianca has a white base, garlic confit, mozzarella, potato, leek, rosemary and parmesan but after being reassured that it tastes equally as good without the garlic and leek on a gluten-free base (yeah, right), I order it.

Drink options are numerous, from craft beers and a decent selection of wines to the intriguing smoked rum and apple (akin to death in a glass for me) and boozy root beer spider. I pair my potato pizza with a pinot noir and Soy and Pulses Float My Bloat goes for a chardonnay.

I am impressed by the speed at which our pizzas arrive, particularly considering the many tweaks mine had to undergo.

My potato pizza is a sea of white and isn’t much to look at, but I greatly enjoy it. The coconut milk-based mozzarella has a consistency similar to scrambled eggs, which may sound like an insult, but I really like it – it is well-seasoned and light. The thinly sliced potatoes are generously sprinkled with rosemary and retain a bite that I’m unused to in potato pizzas – usually they’re soft and meld seamlessly into the cheese, but each element in this pizza is distinct. The olive oil gluten-free base is thin and crisp, but holds up well under its toppings. I devour this in a short ten minutes, and don’t feel sick halfway through, which is an anomaly in my close to 29 years of ingesting pizza. 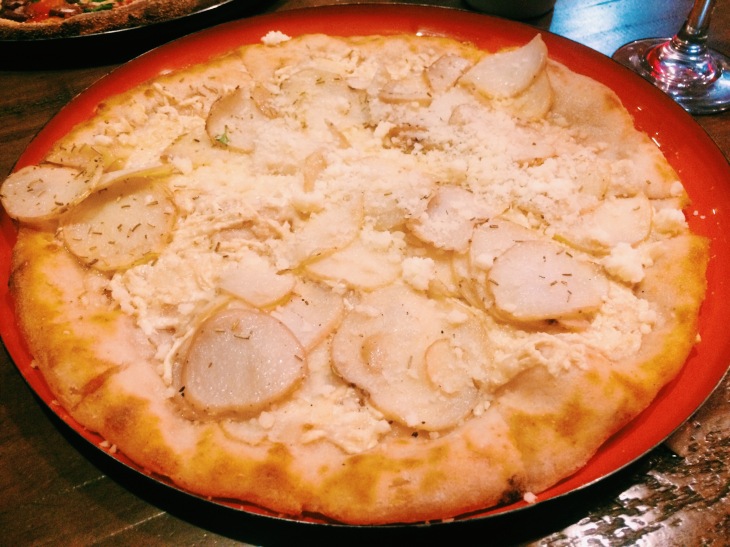 Red Sparrow is akin to the McDonalds of vegan food – you may not be able to order anything with animal products in it, but that doesn’t preclude it from serving up some of the most artery-clogging desserts I’ve heard of – from a deep fried mars bar and a tiramisu pie to a Nutella pizza. All sound heavenly, but I steer clear and enjoy the unaccustomed sensation of feeling fine after a meal, because I know the next time I’m at Red Sparrow, I’m ordering that HS Pizza.

Red Sparrow Pizza is open from 5pm to 10pm Tuesday to Thursday and from 12pm to 10pm Friday to Saturday.