What: The best char kueh teow in Melbourne, which is not something I say lightly

Whenever someone asks me where the best Malaysian in Melbourne is, I usually mutter a non-committal answer and direct them to the closest Malaysian there is because there is simply nowhere in Melbourne that recreates the unusual flavour combinations that I grew up with and love.

Jade Kingdom in Heidelberg West and Madam Kwong in Box Hill come close but are too far away for this city slicker. Old Raffles Place is a novelty in that it serves the deceptively savoury ‘carrot cake’ and Melbourne Wok is the first Melbourne restaurant I know of that is having a red hot go at making the famous Indian Malaysian banana leaf rice. PappaRich, Malaymas, Laksa King and Chef Lagenda are inconsistent at best and poor imitations at worst.

Having encountered minimal success with Malaysian food in Melbourne after more than a decade of living here, I’d resigned myself to enjoying the dishes of my childhood when a) I visit my parents or b) fly home for my annual food pilgrimage. That is, until I found Sarawak Kitchen.

Sarawak Kitchen borrows its name from the large Malaysian state in Borneo that shares its borders with Brunei and Indonesia, hence why it may not be as instantly recognisable as a Malaysian restaurant as all the restaurants with ‘laksa’ in their titles. But white people will be pleased to know it serves their favourite Malaysian dish – you guessed it, laksa! – along with dishes native to Sarawak such as kampua noodles (handmade noodles seasoned with pork lard and onion oil), kolo mee (springy egg noodles topped with either barbecued pork, minced pork or minced chicken) and foochow fried noodles (egg noodles cooked in chicken stock and fat and topped with either seafood or pork).

Sarawak Kitchen also has what I term ‘miscellaneous Asian dishes’, which somehow sneak their way into every South East Asian restaurant’s menu – think ‘Thai-style fried rice’ and ‘honey lemon chicken rice’ (shudder) – and that I steer clear from each time I visit, but I may be missing out for all my snobby self knows.

On this occasion, I was keen to stick to my intolerances and so I ordered the vegetarian Foochow noodles without onion and garlic, after the waiter reassured me that Foochow noodles are rice noodles. As an aside, Sarawak Kitchen also serves up mock pork that looks suspiciously like the real thing, but tastes more like umami slivers of undiscernible protein. I love it.

I came with my parents, who are tough critics at the best of times and even more so when it’s a Malaysian restaurant under the microscope, as well as my cousin. My parents ordered the Penang fried kueh teow and the kolo mee to share, while my cousin went for the Foochow thick rice vermicelli soup with preserved vegetables and fried fish fillets after she was told her first choice of Sarawak laksa had run out, a testament to how popular it must be with the Malaysian-dominated clientele.

My heart sank when my dish arrived – the Foochow noodles turned out to be egg noodles i.e. a nightmare for me and my merry band of people who can’t digest wheat. I was too hungry to contest the misguided advice I’d received while ordering, and got half of the gargantuan portion of noodles taken away in a doggy bag to reduce the likelihood of being bloated after. So much for that. 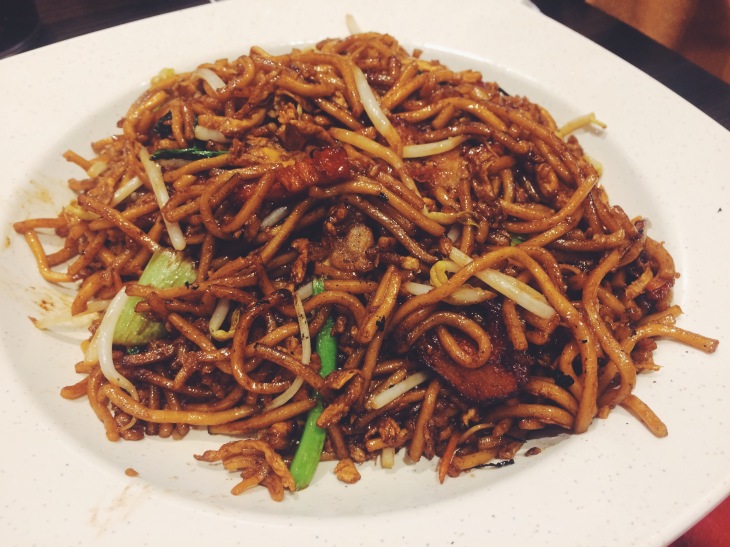 The egg noodles were coated in a thin layer of oily goodness from the wok and packed a punch in terms of flavour, which was impressive when you account for the fact that they weren’t cooked with onion, garlic or meat. The mock pork pieces were dispersed among the noodles, and added a much-needed textural contrast to the otherwise highly homogenous dish. As usual, it wasn’t spicy enough for me, so I added a dollop or ten of chilli oil and mixed it in amongst my noodles. Pure perfection was the outcome.

My parents were greatly impressed by the fried kueh teow, which is a win if there ever was one. For the unacquainted, kueh teow is a famous rice noodle dish fried over high heat in a large wok with an assortment of fresh seafood, egg, bean sprouts and a lot of garlic. The result is smoky noodles with a beautiful aftertaste known as ‘wok hei’. 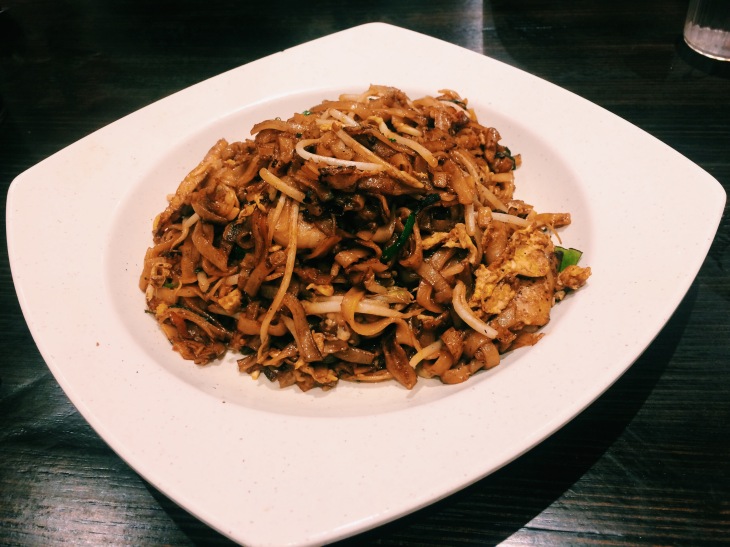 If I were to have one quibble with Sarawak Kitchen’s kuey teow, and this may seem like an odd one, the portion is too large. This means the ‘wok hei’ is slightly less pronounced than it would be in an authentic kueh teow because the concentration of flavours is compromised by the sheer quantity. If you don’t believe me, the guide above on how to obtain the ‘wok hei’ flavour greatly depends on not having too many ingredients in the wok.

And besides, the best thing about any delicious thing is that it’s finite – how much better do potato chips taste when you have to share them with everyone as opposed to having the entire bag to yourself? And I’m not espousing the value of sharing here, although it is undoubtedly a good thing, but more the experience of savouring the last few bites of something because you know there won’t be many to come.

After the strong and familiar flavours of the kueh teow, my parents were less taken by the kolo mee, although I blame this on a genetic predilection for chilli as opposed to any fault of the kolo mee itself. I’m not familiar with this Sarawakian dish, but everyone around me seemed to be having it, so I’ll take their word for it. 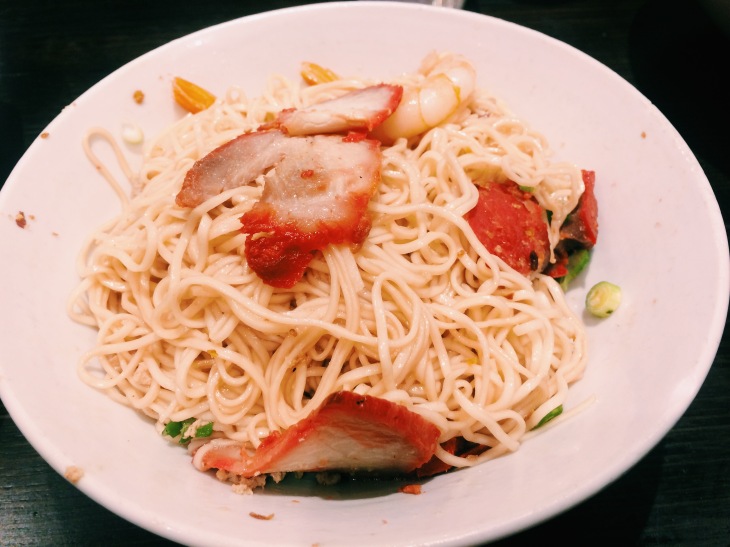 My cousin enjoyed her Foochow noodle soup and remarked that it was a pleasant departure from the coconut milk-heavy laksa that she initially went for. The Foochow noodle soup was tangy and light, reminiscent of its tamarind-heavy cousin ‘asam laksa’, while the generous helping of deep fried fish fillets absorbed the rich soup that they were submerged in. If I’d known I wasn’t going to be following my intolerances, I would have gone for this. 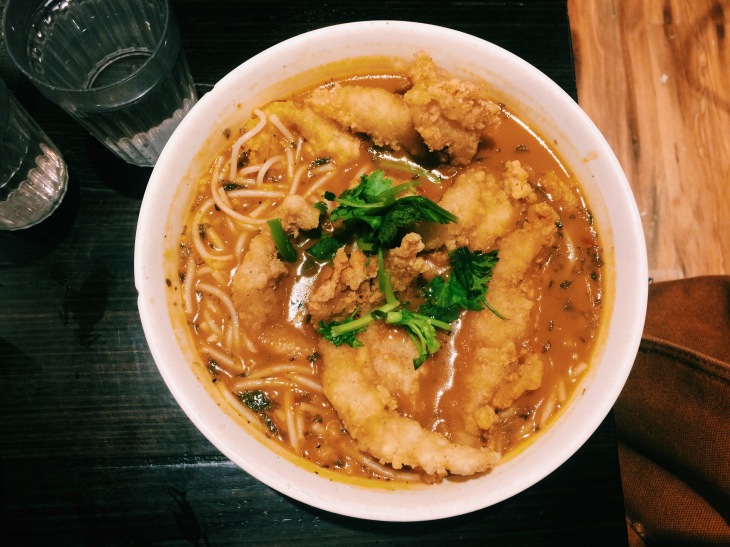 While there’s never going to be somewhere that recreates the exact feeling of being at home, Sarawak Kitchen comes close and for that, I’m incredibly thankful.

Sarawak Kitchen is open everyday from 11am to 10.30pm.