Papa Whatever Floats Your Bloat and Mama Whatever Floats Your Bloat go through spells where they visit their favourite restaurant of the moment repeatedly before deciding they want to have nothing to do with it. Restaurants that have received this treatment: Chef Lagenda and China Red. Restaurants that have somehow escaped this treatment, despite multiple visits: Bar Idda and Le Café Flo. Aunty Franklee is their flavour of the week (on a completely unrelated note: remember this song?) and time will tell whether it becomes a former favourite or a firm favourite.

If you visit Aunty Franklee expecting one of those jack-of-all-trades Malaysian establishments that do everything from nasi lemak and Hainanese chicken rice to beef rendang and roti canai, you’ll be disappointed. Aunty Franklee serves a small selection of some famous Malaysian food exports but also other lesser known dishes like ‘thunder tea rice’ and ‘mother hen soup’, expanding the popular conception of what Malaysian food is. The menu also differs slightly between the CBD branch and the Hawthorn branch.

I have to hand it to Mama Whatever Floats Your Bloat, however – this char kuay teow was easily the best I’d tasted in Melbourne. I’d visited the CBD branch of Aunty Franklee before as part of a review for Time Out Melbourne and remember liking the char kuay teow, but for some reason had never ventured back. This visit reminded me that I should add Aunty Franklee to my constant rotation of restaurants.

Mama Whatever Floats Your Bloat is allergic to prawns and I can’t eat them on my low-histamine diet, so we ordered the char kuay teow with chicken instead and it was unexpectedly delicious. My main quibble with the use of chicken in char kuay teow is that it’s usually overcooked and dry, but Aunty Franklee steered clear of this rookie error. The chicken had been diced into bite-sized pieces that melted in our mouth alongside the fried shallots (strike 1 for my intolerances), small slivers of lup cheong (Chinese pork sausage and strike 2 for my intolerances) and the scrambled egg. Not to mention the wok hei (wok breath) and pleasantly charred quality of the noodles – the hallmark of any good char kuay teow – were off the charts and each strand of thick rice noodle was slick with pork lard without being too oleaginous. 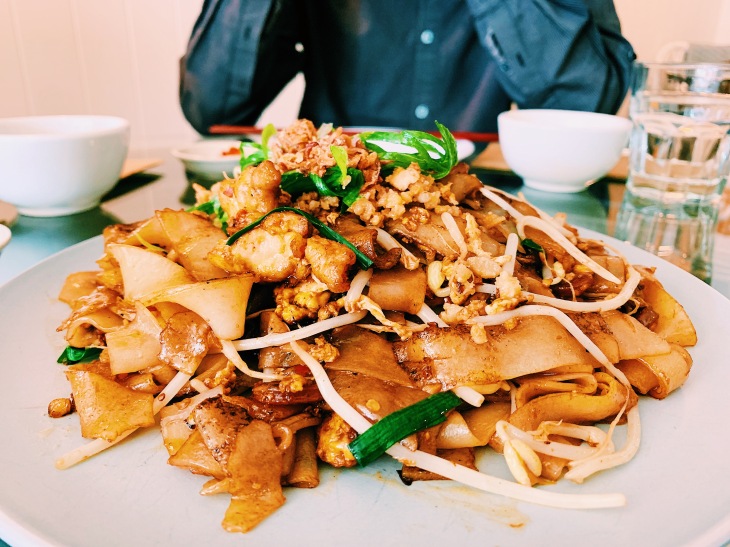 Note for fellow Asians: order this extra spicy, as my mum did, because it’ll be too mild otherwise. Even upon request, this was only moderately spicy so I can’t imagine how white person-bland this would’ve been without our request.

The char kuay teow at Aunty Franklee is a big portion and while you could certainly tackle it alone, why not share it with others so you can order more things? We also ordered bak kut teh, a Malaysian-Chinese herbal pork rib broth stewed with 23 herbs and spices in Aunty Franklee’s version. You can order either the soupy version or the dry version and we went for the former, ordering two serves of Aunty Franklee’s multigrain rice to eat with the broth. Bak kut teh purists will be disappointed to note that Aunty Franklee doesn’t serve up bowls of white rice, which is arguably the best kind of rice to eat with broth.

When I visited Aunty Franklee’s CBD branch in 2017, my main complaint was that the soup wasn’t as full-bodied and fragrant as it should’ve been. I had no such complaints this time. The soup was piping hot when it arrived, with the aromas of star anise, garlic and cloves wafting through the air. Aunty Franklee’s broth comprised pork ribs, belly, slices and meatballs as well as tofu puffs that expanded in the broth and mushrooms that provided an earthy counterpoint to the strong flavours. As we got to the bottom of the claypot, the soup became gradually stronger and herbier, much like a pot of Chinese tea – I loved it.

You can’t order bak kut teh without an accompanying serve of you char kway, known here as Chinese doughnuts because they’re deep-fried strips of dough. They’re crisp on the outside, light and airy on the inside, and when they’re dunked in the broth, they become the perfect vessel to absorb all its herbaceous notes – similar to the tofu puffs. Mama Whatever Floats Your Bloat gradually deposited all the you char kway into the broth and every spoonful I got of them felt like winning the lottery. You can drink the broth by itself or ladle it on to your rice – I did both, and availed myself of the soy sauce mixed with chilli and garlic that was served up to us at the beginning of our meal to up the ante on the spice front.

I’d be curious to see if non-Malaysians like bak kut teh – it’s an incredibly nostalgic dish for me as it evokes my childhood, and I greatly enjoy the herbal, almost medicinal quality of the broth, but I’m not sure if it’s an acquired taste or something that has a universal appeal. If you are trying it for the first time, do so in these wintery months – there is no better balm for the cold than this warm and comforting dish.

The dishes arrive quickly at Aunty Franklee – we were in and out within an hour, and only because we stuck around to chitchat and digest the copious amounts of food we’d just ingested. One serve of char kuay teow and bak kut teh was plenty of food for the three of us, if not a bit too much as we were all uncomfortably full by the end of it.

Though I paid lip service to my intolerances by ordering the char kuay teow with chicken, I’m not supposed to eat cured meats or shallots so the char kuay teow was definitely an intolerance breach. Equally, commercial stocks and slow-cooked foods – two categories that bak kut teh definitely falls into – are ill-advised, so I ended up with an expected four bloats from this.

The co-owner recognised me at the checkout as I was paying the bill from the Time Out Melbourne review I’d written of Aunty Franklee all those years ago – something that’s never happened to me before. My parents surmised that that was probably why the standard of the food was so high, but I doubt my “star power” extends that far – if anything, Aunty Franklee seem to be consistently pushing out plates of exceptional char kuay teow and claypots of fragrant bak kut teh, some of the best in Melbourne.

Aunty Franklee Hawthorn is open from Tuesday to Sunday from 12pm to 3pm and from 5pm to 9pm.