What: A hearty bowl of goodness with a side of cultural appropriation

If you’ve somehow managed to avoid ‘2017 foods you absolutely CANNOT DO WITHOUT’ listicles, a poke (pronounced poh-kay) bowl is a Hawaiian delicacy that comprises raw fish either served by itself or atop warm sushi rice. The traditional ahi poke, with ahi being yellowfin tuna, comes with limu (a type of sea algae) and crushed candlenuts. More contemporary versions feature soy sauce, sesame oil, onions and sesame seeds and the substitution of yellowfin tuna with octopus, salmon, tuna or vegetarian alternatives.

However, just as Peruvians and Bolivians were left unable to afford their staple grain when demand for quinoa surged in the West, the explosion of poke bowls on to the worldwide eating scene isn’t without repercussions.

Hawaiians are now concerned poke bowl chain stores across the world are exploiting one of the cornerstone emblems of their culture without permission or an understanding of the significance poke bowls occupy in traditional Hawaiian culture and cuisine. With poke bowls suddenly occupying prominence in food pages across the world, Westerners who count themselves among firm devotees of the #fitspo hashtag are more likely to think of poke bowls as the best thing since ‘zoodles’ instead of an autochthonous dish that has been around for centuries.

I suspect Mark Noguchi, the Hawaiian chef who penned this diatribe against the commodification of poke bowls, wouldn’t be a fan of the twee Mahalo Poké in Richmond. If the menu with its use of cutesy Hawaiian words doesn’t set him off, the word ‘poke’ in the eatery’s title has a diacritical mark above the ‘e’, which may help Westerners pronounce it, but goes against Hawaiians’ original spelling of their local dish. As I analogised, non-Indians incorrectly pronouncing my surname Nair (hint: it doesn’t rhyme with hair) doesn’t mean I should change its spelling to make it easier for them. Doing so would constitute an obliteration of the name’s rich cultural heritage and an erasure that caters to the dominant narrative.

Notwithstanding my  brown middle-class guilt, I chose Mahalo Poké as a dinner spot a few weeks ago for one reason: poke bowls are incredibly intolerance-friendly.

With most of the signature bowls at Mahalo coming with red onion, I went with the ‘build your own bowl’ option to customise it as much as I could. In an envy-inducing move, my friend got the ‘crispy soft shell crab’ bowl that came with corn, kimchi, ka’ukama (cucumber), red onion, carrot and jalapeno Sriracha cream. 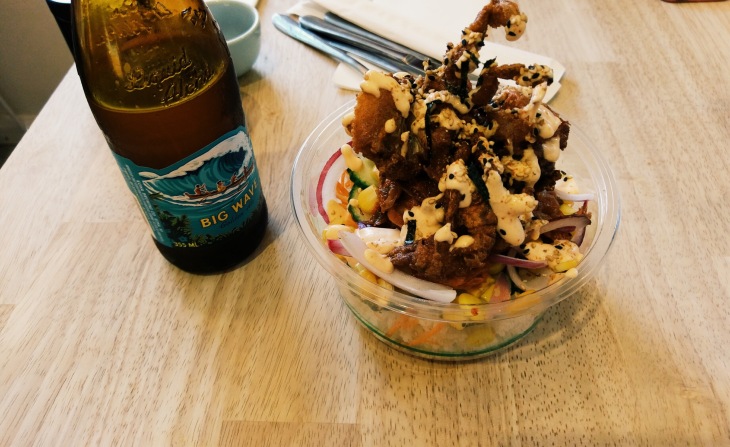 With the ‘build your own bowl’ option, you pay $14 for a base, a protein, four toppings and a dressing of your choice – although any protein other than the chicken and vegetarian option incurs an extra cost, which feels like a con. I chose brown rice as my base and salmon as my protein for an extra $1. I chose wakame (seaweed), kale chips (I’m only human), jalapeno and edamame as my four toppings. The choice of dressing was an easy one because the only dressing that had no onion and garlic was the wasabi mayo.

If you’re hankering for sides, you can choose from the likes of buttermilk fried chicken with Hawaiian-style gribiche, zucchini rice fritters and waffle fries with kimchi, spring onion, chilli salt and herbed sour cream. Suspecting my piecemeal efforts at following my intolerances would be thwarted by simply a whiff of those waffle fries, I resisted.

I want to say I hated my dish and that cultural appropriation is bad and never delicious, but I adored my DIY bowl. Although my FOMO initially kicked in when my friend’s perfectly crisp soft shell crab bowl arrived, it was all but negated after the first mouthful of my dish. 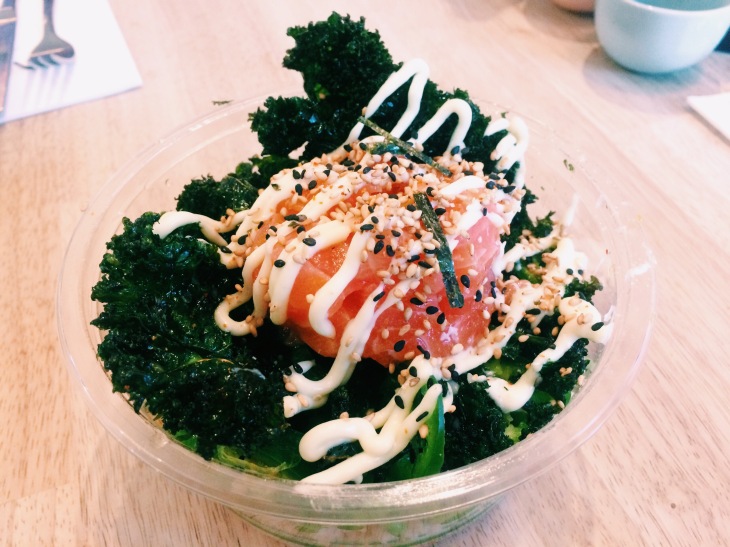 Fresh slivers of salmon were heaped atop a makeshift bowl of crispy kale and doused in lashings of a creamy yet piquant wasabi mayo. Digging further into my deceptively large bowl revealed a generous number of jalapenos, edamame and a bed of warm brown rice. My perennial desire to burn the innards of my stomach through excessive consumption of chilli was satisfied by the combined efforts of the spicy dressing and jalapenos. Meanwhile, the crunch of the crispy kale and seaweed very much satisfied my innate craving for something deep-fried, without making me feel the way I do after eating actual fried chicken.

I savoured every bite and was glad that my decision to follow my intolerances was being rewarded with an uncharacteristically delicious onion-, garlic- and wheat-free meal.

Mahalo Poké is open for brunch too and serves up a breakfast poke, Hawaiian pancakes and a Hawaiian-inspired smashed avocado, among other things. You can also play ‘hipster bingo’ by seeing who would be the first to accrue these five ingredients in their smoothies: chia, coconut H20, acai, spirulina, buckinis.

I don’t know how to feel about the rise of poke bowls as yet another fashionable food fad, but I’d be lying if I said I didn’t enjoy my meal at Mahalo Poké. God dammit.

Mahalo Poké is open from 7.30am to 10pm Monday to Friday and from 8am to 10pm Saturday to Sunday.