What: A katsu sando place midway between Saint Dreux and Coppe Pan

Deep-fried crumbed meat sandwiched by two pieces of fluffy white bread – what’s there not to like about katsu sandos? Nothing, which is why I chose to celebrate my last day at a former job by dining at Meet Sando with colleagues.

Pickett’s Deli had recently moved from its coveted spot at the corner of Queen Victoria Market to the Melbourne Airport (looks like my pre-flight breakfast tradition of McDonalds will have some competition) and that’s where Meet Sando sits now. Due to the complex’s heritage-listed status, nothing had changed about the layout from its deli days, and I wouldn’t recommend visiting on a hot day – the only thing that saved me from breaking out in sweat patches the day we visited was this extremely strong anti-perspirant deodorant that Tea Siren put me on to.

Everyone on the table save for three of us ordered the panko chicken and nori mayo sandos ($13). This included (and forgive the lengthy intros for these are all first-timers on the blog):

Each of them loved their chicken katsu sandos, commenting on the fluffiness of the white bread and the crispness of the immaculately fried chicken. Petri Dish Pizza particularly enjoyed the crustless bread as it reminded him of being a child, and Dancing Queen was a huge fan of the umami nori mayo. Tea Siren remarked that the chicken was so crisp yet so juicy and also gave the nori mayo a 10/10 score. Each sando is made fresh to order at Meet Sando, and nearly everyone in the group who had the chicken katsu sando commented on its freshness.

Socially Septic, who once thought his social anxiety was causing him to have a bad time at our work Christmas party only to find out he had a septic kidney, ordered the portobello mushroom, truffle mayo and mozzarella sando ($11). I noted the mushroom wasn’t crumbed, but was rather baked with cheese, and wondered if it’d be as good as the other sandos – Socially Septic assured me that it was rich in flavour and quite delicious but ultimately insubstantial. He had to avail himself of an afternoon snack after to stop his stomach from grumbling.

Fellow vegetarian Water Mum, who ensures all of us are hydrated at all times by filling up our water bottles, ordered the same sando but thought quite the opposite – she remarked that the accompanying mandarin, tomato and cucumber greens salad was too paltry and felt greasy by the end of the meal.

I decided to deviate from my usual pork katsu sando order and got the crispy egg sando ($11). The egg halves were hard boiled and then crumbed in a thick batter, reminding me of something between a scotch egg (minus the minced pork) and a son-in-law egg (with, perhaps, a slightly thicker batter). 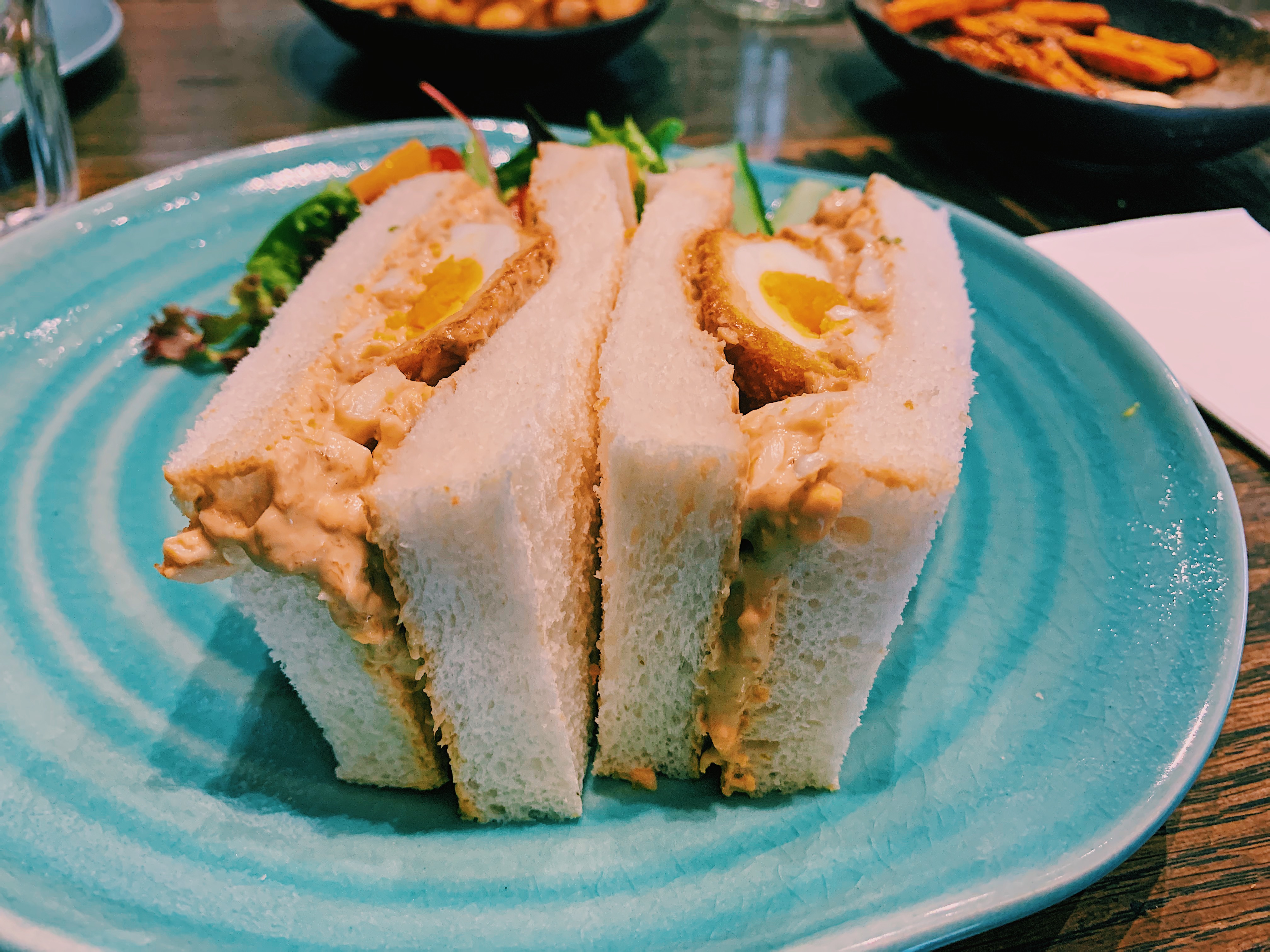 Each egg half made it into a sando half with an accompanying creamy egg salad. I really enjoyed this but the double injection of egg and the creaminess of the nori mayo dressing meant this became cumulatively too rich towards the end. Still good – would do again.

The sides of potato and sweet potato chips were some of the best chips I’d had, in part due to the furikake seasoning on them – a close contender for best chip garnish after chicken salt.

Of course I can neither eat bread nor breadcrumbs so it was a moderately bloat-filled time at two bloats, though the small size of the sandwiches meant it didn’t get too out of hand.

There’s no shortage of places you can get katsu sandos, from cheap Japanese bakery Coppe Pan and luxe sandwich bar Saint Dreux, where a wagyu sando costs $28, to places outside the CBD like Lokall and Chotto Motto (Lokall has been my personal favourite – its chicken katsu sando is to die for). But there’s no harm in having one more, particularly one that serves Proud Mary coffee, and Meet Sando is a more than worthy addition to the plethora of food options in the market. Come for the crumbed meat and eggs, stay for the furikake chips.