What: A good option for Calombaris haters who want to dine out on Greek

Papa WFYB was turning yet another year older, but instead of commemorating the occasion at our usual trusty Bar Idda, we ventured three minutes north to Greek restaurant Xenia Food Store.

Choosing a place to dine at with your parents is always a challenge, especially when your parents are Malaysian-Indian and refuse to dine out on anything remotely under the South Asian or Southeast Asian umbrella. We’d exhausted nearly all the affordable Italian dining options in the city and inner north, and so Greek became the new Italian.

Xenia Food Store is manned by the same people behind Philhellene in Moonee Ponds, a stalwart of Greek and Cretan dining.

The first thing that occurred to me upon entering Xenia Food Store was how cold it was. I have to concede that it was an unusually cold day in June at a top of seven degrees, but Xenia was nevertheless ill equipped to deal with it. We were seated against a large double-fronted window and despite the heater that had been placed at one end of our table, all of us kept our coats on – which wasn’t the best when you’re trying to make your way across the table for the tzatziki and your sleeve makes contact with the taramasalata.

As frosty as the interiors was the service, which is funny because Xenia is named after an ancient concept of hospitality. The rather surly matron of the restaurant, who was neither friendly nor prompt with clearing our plates or taking our order, was terrifying but ultimately inoffensive.

As always, ordering was delegated to me. Looking around the table, I quickly assessed the eating capacity of each person – Mr WFYB has the stomach the circumference of a peanut; Mama WFYB doesn’t eat all that much; my cousin Snack Queen, as her name suggests, grazes throughout the day; and Papa WFYB, perhaps the best eater at the table after me, nevertheless couldn’t carry the load by himself – and so I ordered accordingly. Mama WFYB only had one request: that her quintessential favourite entrée of calamari be ordered.

I selflessly ordered the trio of dips for everyone, despite being able to eat neither dips nor pitta bread (spelled with a double ‘t’ on Xenia’s menu). Everyone seemed to enjoy this, save for Mr WFYB whose pickiness extends to dips and to whom only one dip reigns supreme. The three dips were baba ganoush, tzatziki and taramasalata, and Mama WFYB commented on the superior quality of the warm pitta bread, which tasted like it’d just been in the oven. When the calamari did arrive, I dipped a tendril in the garlicky tzatziki and can vouch for its zing. (P.S. the dips came out looking a lot more appetising than the below, but I forgot to take a picture of them until Papa WFYB reminded me.) 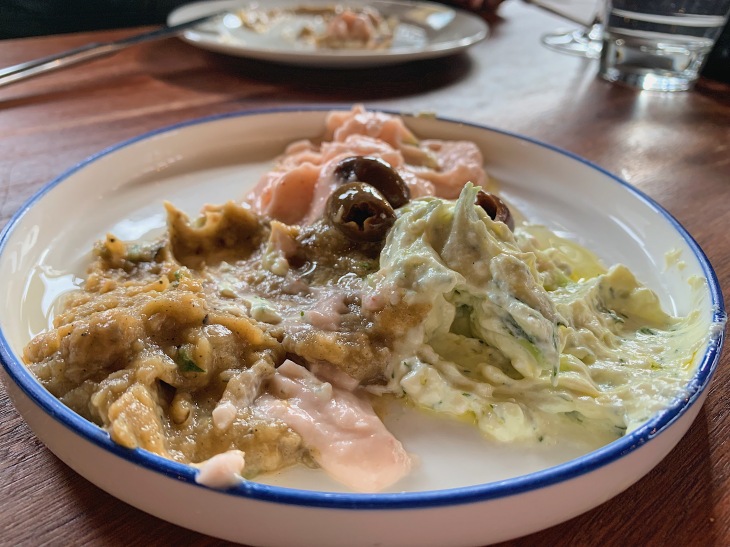 The calamari, which I sadly neglected to take a picture of in my haste to eat it, was as every good calamari should be – fresh, crisp with a light coating of batter, and pleasantly tart under a squeeze of the accompanying lemon.

I read a line in my friend Connor O’Brien’s newsletter for lapsed and lazy environmentalists (I highly recommend it) that references science writer Marta Zaraska which really struck a chord with me:

“If we figured out that carrots suffered when killed, fought for their lives, and that growing them caused fairly immense environmental damage, most of us would immediately stop eating carrots.”

Connor goes on to say that many of us can’t give up meat for the same reasons because there are uniquely addictive things about meat’s flavour profile that render us willing to bear intense cognitive dissonance in our bid to consume it.

If I can extrapolate this line of thinking to my intolerances, it’s why I’ve immediately stopped eating certain high-histamine things yet can’t stop eating others. Chocolate and wine have been supremely easy to give up because I never liked chocolate and don’t like any type of alcohol enough to be rendered sick from it, but giving up tomatoes and cured meats has been exponentially harder because I really like these things.

The same went with my lunch at Xenia Food Store. Resisting the pitta bread and dips weren’t hard because I have never been wowed by bread (sorry! Blasphemous, I know!) but my well of willpower was dry by the time the yemista arrived.

Xenia’s yemista featured capsicums and tomatoes – two high-histamine vegetables! – stuffed with a tomato-infused herbed rice. It was deceptively simple, yet maybe one of the best Greek dishes I’ve ever tasted. I harbour a deep-seated love for any vegetable stuffed with rice, which extends to Eastern European stuffed cabbage rolls and rice-stuffed vine leaves i.e. dolmades. “Stuff anything with rice” is my motto in life.

The yemista had yellow capsicum, red capsicum and a tomato with blistered soft skins from being roasted in the oven. The sweetness of these vegetables came to the fore when eaten alongside the al dente rice stuffing, which retained a pleasant bite and was beautifully aromatic with hints of oregano and thyme. This dish was unanimously everyone’s favourite, even Mr WFYB’s, which underlines Greeks’ superb preparation of vegetables, despite the common misconception that it’s a meat-driven cuisine. On a similar note, Xenia Food Store should on your list if you’re vegan – it does a $30 vegan banquet every night, which includes the likes of vegan-marinated feta.

Acquiescing to the tiny appetites around me, I ordered the mixed grill for two despite there being five of us and this turned out to be the perfect quantity. In fact, we even had leftovers, which Papa WFYB and Mama WFYB took home with them.

The highlights of this platter were the moist and well-seasoned chicken skewers, which Mr WFYB single-handedly demolished, the spicy loukaniko (Greek pork sausage usually flavoured with fennel seeds or orange peel), which was a welcome addition of heat for this chilli-obsessed Indian family, and the juicy lamb cutlets. Less successful, but still enjoyable, were the biftekia (Greek herbed burger patties) which had a nice fragrance but were slightly dry, and slivers of the roast leg of lamb, which were similarly dry.

Another of the table’s joint favourite dish alongside the yemista was the baked lemon, garlic and oregano potatoes. My life has improved considerably since I discovered I can eat garlic without consequences, and this dish would have to be a highlight of my post-FODMAP life. I love Greek potatoes and the simplicity of this dish belied the mouthwatering concentration of flavours when you combine three of Greek cuisine’s most integral ingredients: olive oil, lemon and oregano. Some Greek-prepared potatoes have crunchy exteriors but these were soft inside and out, which I actually adored, despite the fact that this may not be to everyone’s taste. It was a treat alongside the grilled meats.

We were, by this stage, fairly full, although less so me since I’d stayed away from the pitta and dips and so I supported Mama WFYB’s lobbying that we get dessert. The loukomades (Greek donuts served with honey, crushed walnuts and cinnamon) grabbed her attention while I was taken in by a dessert on the specials board, the ekmek kataifi – syrupy shredded fine filo pastry (kataifi) with a layer of cool custard cream (ekmek) and a layer of airy whipped cream sprinkled with cinnamon and pistachios. We ordered both.

The loukomades were honey-drenched and crisp on the outside, fluffy and warm on the inside. They were slightly too sweet for me, but this is coming from a person who would eat chips for dessert – everyone else thoroughly enjoyed them. Please note, however, that it’s a huge portion of around 10 loukomades, so only order it if you’ve got the right number of people or if you’re willing to take them away as we did.

The ekmek kataifi was a revelation. Light, airy and fresh due to the addition of cool whipped cream and sweet smelling from the lemon-scented syrupy nuts drizzled across it, the ekmek kataifi was the perfect end to a filling meal. In Mama WFYB’s words, it was sweet, yet not too sweet.

We thoroughly enjoyed our meal at Xenia Food Store – Mama WFYB said it was better than Hellenic Republic, which we’d dined at for her birthday earlier in the year. In my opinion, Hellenic Republic was more consistently good across the board, but it didn’t have a dish that wowed us as much as Xenia’s yemista did.

I lost count of the number of high-histamine ingredients I had – tomato, capsicum and honey were just a few of them – so it’s no surprise I ended up with three bloats, but I’d withstand any number of bloats for that yemista.

Xenia Food Store is open from Tuesday to Thursday from 5.30pm to 10pm and from Friday to Sunday from 12pm to 10pm.