What: The only Vegemite curry you’ll find

I ended up visiting Sunda quite by accident – I knew Nigella had dined at a South East Asian restaurant in the CBD during her time here in January, and mistakenly thought it was Sunda, only later realising she’d gone to Vietnamese restaurant Annam. No matter – Sunda had been on my list for a while and it did not disappoint.

Wunderkind chef Khanh Nguyen – who is only 27 but has already worked at Noma’s Australian pop-up and Dan Hong’s Mr Wong – is at the helm of Sunda’s menu, and it’s an interesting one at that. Named after the Sunda Islands that are spread across Brunei, East Timor, Indonesia and Malaysia, the restaurant’s menu is largely influenced by the latter two countries.

Beef rendang, as popular in Indonesia as it is in Malaysia, is funnelled into a sweet bread bun that Nguyen terms a ‘pie’. Otak otak, a steamed fish cake wrapped in banana leaf popular throughout Southeast Asia and whose name translates into ‘brain brain’ due to its texture (it’s so much more appealing than it sounds), is served with spanner crab and rice crisps. There’s no other term for this food than ‘fusion cuisine’, but it’s food executed with thorough knowledge of the tradition in which these dishes originated from, and the precision of Nguyen’s execution speaks to this.

In a nod to the traditional lands on which these dishes are being made, native ingredients feature aplenty on Nguyen’s menu. Tasmanian pepperleaf garnishes the rock oysters, finger limes spike the otak otak and Geraldton wax features in the bass groper. Nguyen has fused the chilli-laden sambals, Vietnamese mint and XO sauce of Southeast Asia with ingredients that can only be found in Australia.

Ordering dishes that I’d order back home was, however, an interesting experience when the waiter barely understood what I was saying – I pronounced ‘otak otak’ as it’s pronounced in Malay (oh-thak oh-thak) only for the waiter to ask me to repeat myself twice. He also, of course, pronounced ‘rendang’ as ‘ran-dang’ – a mistake I’ve heard all too often. I shouldn’t have been overly critical, but it’s an odd experience having your own food served back to you, albeit mispronounced.

Cultural missteps aside, our waiter was excellent when it came to recommending drinks. Both High-Flying Banker and I didn’t feel like drinking until we realised the $10 aperitifs cost less than the $15 mocktails. Upon our waiter’s advice, High-Flying Banker went for the strong, tart and bitter amaro nonino while I went for the amaro montenegro upon hearing that it had notes of marmalade and jam. He was spot on and we were both highly content with our choices. 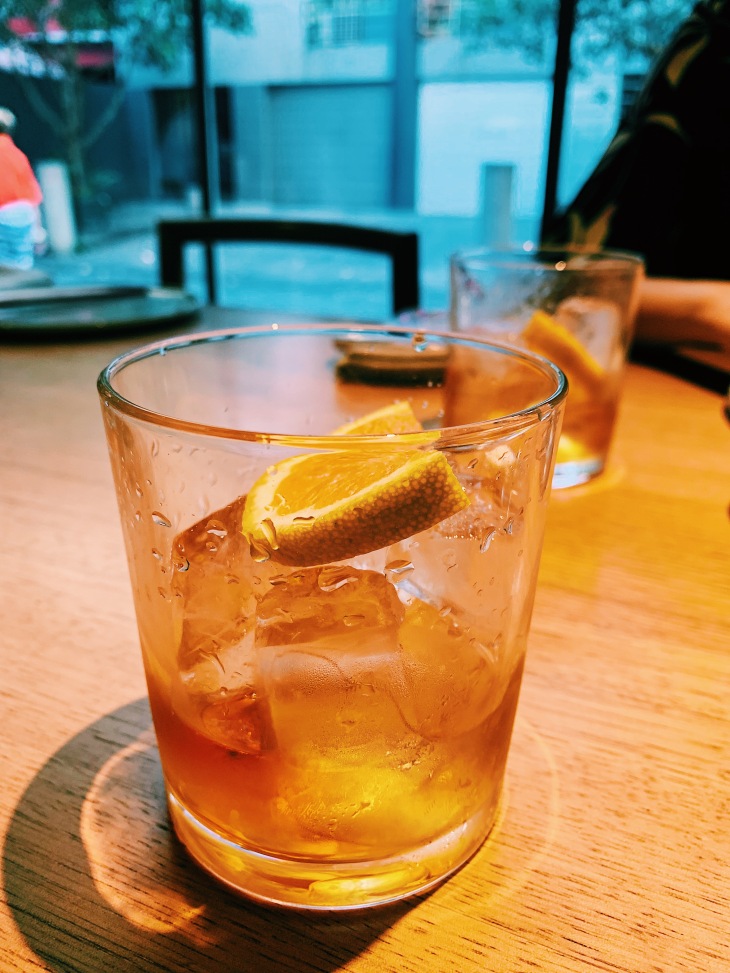 The typical appetite-whetting snack of prawn crackers that you get upon arrival in Chinese restaurants is swapped out in Sunda for a bowl of acar, a dish comprising cucumber, carrots and beans pickled in vinegar and tossed in a belacan spice paste and ground peanuts. High-Flying Banker, who is also Malaysian, and I were tickled by how a stock standard condiment that we’d barely pay heed to back home had been elevated into something white diners would be undoubtedly impressed by due to the fancy bowl it’d been served in. Sunda’s acar was creamier and less sour than what I’m used to, but just as spicy. I loved it because it had crisp jicama scattered across it as well, which reminded me of the popiah (Malaysian spring rolls) my parents used to buy me every Sunday. 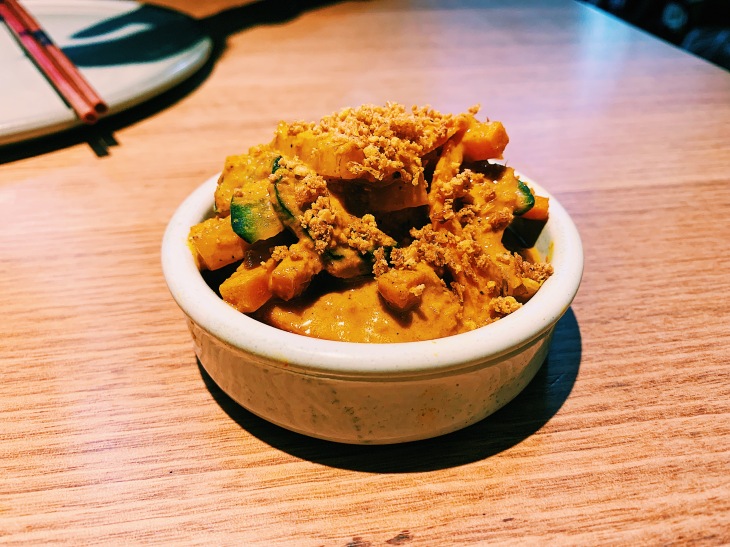 The acar set the tone for the rest of the dishes we had at Sunda. I knew what I’d come here for, and yes you guessed right – the roti with vegemite curry. This wasn’t any roti, however – Nguyen spent the two months prior to Sunda’s opening perfecting both the roti and the curry recipe. I’d read that Sunda only churned out 25 servings of this a day and that you had to ask for it as it was an off-menu secret, so I was exceedingly glad when our waiter mentioned it was a daily special. I was initially scared High-Flying Banker wouldn’t be up for the unusual combination, but she gave it a red hot go and I’m glad she did because I still would’ve ordered it and the five bloat aftermath would have been far worse had I tackled this alone.

Our waiter notified us that the roti would take 20 minutes to arrive because it’s prepared then and there, and you can certainly tell. Roti so flaky you could easily tear it apart with your fingers and so buttery the individual discernible strands were slicked with a glistening layer of fat was easily the highlight of our meal. The vegemite curry in question was less a curry than a paste, which we knifed across our coils of roti – it was smooth and velvety, with a noticeable yet complementary aftertaste of vegemite. Khanh makes the curry with vegemite, butter, sour cream and roasted yeast. It didn’t taste as freakish as I’d imagined, and when you account for the existence of Chinese Malaysian dishes such as marmite pork ribs, it wasn’t as outlandish as I’d initially thought.

The otak otak was an equal highlight to the roti with vegemite. Presented differently to what it traditionally looks like, the otak otak came in a long rectangular block and was akin to a chilled mousse, topped with chopped up bits of lime-infused spanner crab. The rice crisps were sturdier than they first appeared, and we cut off chunks of the otak otak and smeared it across them. This was delightful – the otak otak was aromatic, light and fresh and paired exceedingly well with the addictive rice crisps.

The rendang pie was our least favourite dish – the overly sweet bun, coupled with the pungent reduction of coconut-laden beef rendang, was overly rich if compared to the delicate flavour combinations of all the other dishes. I did enjoy the accompaniments to the pie, however – a sour spicy red chilli sauce reminiscent of what you’d get alongside Hainanese chicken rice and pickled radish helped cut through the richness of the pie. I’d recommend sharing one pie between two people, even though the waitstaff will tell you it’s an individual portion. 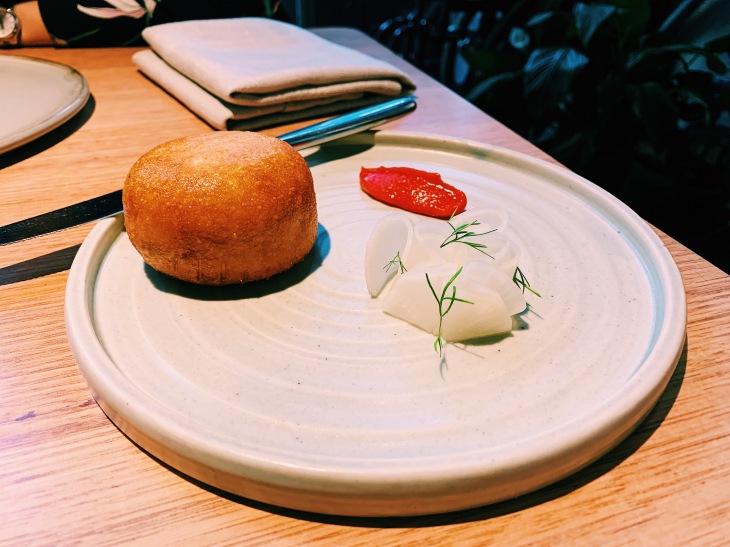 Our last dish of the night was the egg noodles in XO sauce and chicken crackling. The noodles were salty and moreish, with a pleasing crunch in every bite from the chicken crackling. It was also reasonably spicy, with the less chilli-tolerant High-Flying Banker struggling at times. 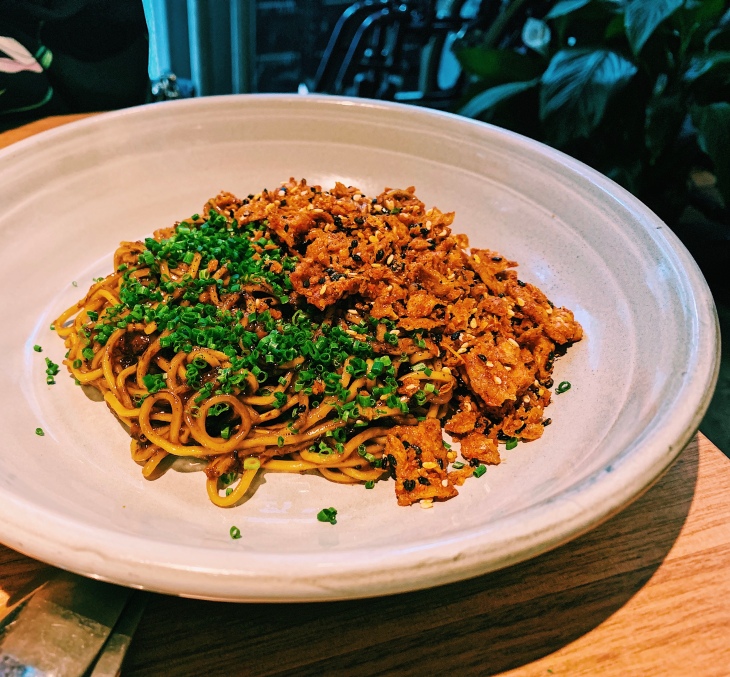 Our delight with our food slowly turned to consternation when we realised the preferential treatment the couple next to us were getting, on account of knowing someone who worked in the kitchen (you hear everything sitting on the communal tables). Our dishes were rushed out to us, with all four dishes sitting on our table at some point and getting cold as a result, whereas their dishes were served to them in a slow, measured manner. But what really got our goat was realising their serve of XO noodles came with slices of ‘uni’, which can be best described as ‘sea urchin’s gonads’. A quick perusal of Instagram quickly revealed that some diners had received uni with their noodles as well. This add-on wasn’t an option on the menu and when we asked our waiter about it, he said the couple received the side serve of uni to neutralise the spice. If he hadn’t typecast us and saw High-Flying Banker’s smarting eyes, he would’ve seen that we could’ve used with some uni too! I love chilli, but I’m also sad I didn’t get a chance to try this dish with some gonads.

Our waiter warned us that our four dishes may not be enough, but High-Flying Banker has a small appetite and I was already bloated from god knows what so we were at a satisfactory level of fullness. Not so much that we couldn’t partake in dessert, however – we ordered the ‘Sunda pav’, which was described to us as a deconstructed pavlova. Any mention of ‘deconstructed’ when it comes to dessert usually set alarm bells off in my head, but I decided to give it a try.

Encircled by a dark chocolate ganache and topped with jagged chunks of meringue with a creamy coconut centre, this dessert was slightly sweet with hints of bitterness from the undertones of Vietnamese coffee, which I greatly enjoyed (bitterness is such an underrated taste IMHO). It was also a textural delight, with the creaminess of the chocolate ganache and the centre offset by the firm bits of meringue. Though it was good, I’m indifferent towards chocolate (blasphemous, I know) and realised that I was expecting a dessert that melded more Asian flavours. If I had my time again, I’d opt for the interesting-sounding honeycomb cake with banana, macadamia and caramelised tofu.

We enjoyed the food we had at Sunda, but the preferential treatment the couple next to us received did leave a sour taste in our mouth. The food was expensive enough that we expected to receive a high level of service, whether we knew someone working back of house or not.

I’d like to take Mr Whatever Floats Your Bloat to Sunda to give him the chance to enjoy his two favourite staples (vegemite and roti) in one sitting, but I’m not raring to go back anytime soon – especially because I was consigned to bed after with a hot water bottle, so crampy and bloated I was. It was probably a combination of the acar (can’t eat pickled things), the vegemite with roti (can eat neither vegemite nor roti), the rendang pie (where do I start with this one) and the fact that I forgot to bring my lactose pills but promptly devoured a creamy chocolatey dessert.