What: Optional side serves of tater tots or fries with everything

Who: Mr Whatever Floats Your Bloat

I have a habit of skipping breakfast on weekends, because breakfast is like fuel and I don’t need anything other than the enthusiasm of it being the weekend to fuel me. As a result, however, I end up ravenously hungry at around midday every Saturday and Sunday (save for when I have the pleasure of going out for brunch) and I had no brunch plans a few Saturdays ago. Mr Whatever Floats Your Bloat is notoriously hard to lure out of the house when it’s not for a halal snack pack or Red Rooster chips, but I managed to entice him with the prospect of a milkshake at Sookie La La, an American style-diner in Northcote I’d been meaning to try for a while.

Sookie La La is a homely, timber-clad eatery; more like a restaurant than a café but where coffee is available with a side of cream if you’d like. Booths with redtop tables are tucked to one side, while leather stools at the bar are there for the taking if you enjoy being perched at a height. Waitstaff are perfectly hospitable yet aloof – it’s a much more relaxed vibe than what I’m used to on a Saturday afternoon. It felt like being in someone’s lounge, if that person had the idea to turn their house into an American-style diner and charge you for it.

The menu on Sookie La La’s website is slightly different to the quaint double-sided handwritten one that we were given, and so I was back to not knowing what I wanted. What did excite me, however, was the scrawled note that you could add fries or ROSEMARY TATER TOTS to any dish for $4 and $4.50 respectively. My dietician had told me ‘commercial hot chips’ are out on my low-histamine diet, but surely that directive doesn’t extend to tater tots…

Sookie La La had ‘brekky things’ on one side of its menu and ‘sangas, burgers and bagelly things’ on the other side. Together, it was an object of beauty with nearly every dish being something that I would have eaten. Mac and cheese waffles with Southern fried chicken and Elvis French toast with banana, bacon and maple peanut butter sat alongside a brisket and halloumi quesadilla and steak and eggs. It was a tricky menu for the 1% of the population who can’t process histamines – processed meats like bacon, pastrami and double-smoked ham sat alongside high-histamine condiments such as maple peanut butter, rancheros sauce and barbecue cola sauce.

I surmised that the only thing I’d be able to order on the ‘brekky things’ menu without causing myself immense pain were the dill and halloumi fritters with watercress and poached egg but what’s diner-style about that? Absolutely nothing, as nice as it sounded, so I turned to the reverse side of the menu.

My eyes immediately gravitated to the Southern fried chicken tenders with the option of maple chilli or buffalo butter, which I begged Mr WFYB to share with me, but he was captivated by the promise of pancakes with fried eggs, bacon and maple syrup on the specials board. So much so he was willing to forego his milkshake, despite Sookie La La having his favourite blue heaven – oh, the challenges of having a puny appetite.

I was still dithering on what to get, but settled on the tuna melt bagel as soon as I caught sight of it. Sure, it wasn’t mac and cheese or a Southern fried chicken burger, but I am highly partial to a good tuna melt, especially when it comes with a side of tater tots! I was breaching my low-histamine intolerances with this order because I’m not supposed to eat canned fish, which of course includes tuna, but my mind was set. Also, I got it with gluten-free bread instead of a bagel, so I was kind of following my intolerances.

Mr WFYB greatly enjoyed his pancakes with bacon and fried eggs, which he liberally doused with maple syrup. Having only recently started eating meat again after a decent stint of 14 years as a vegetarian, Mr WFYB only eats bacon if it’s crispy and this was crispy bacon indeed. 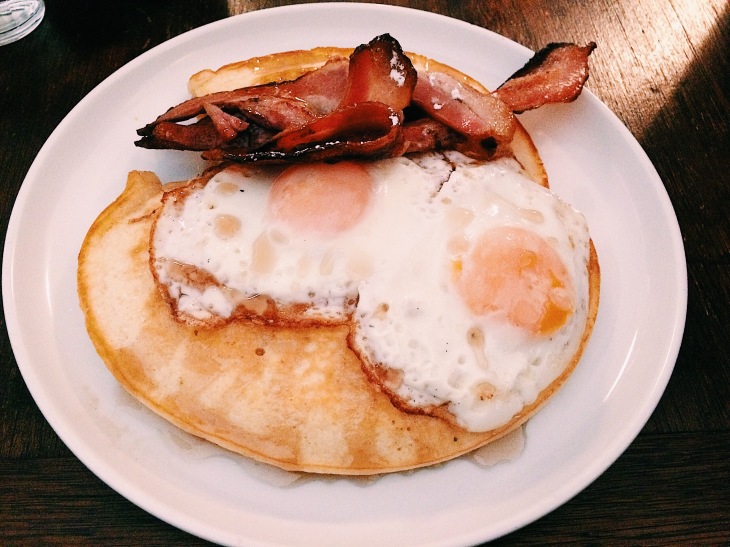 My tuna melt would not have won any food presentation awards, but boy was it good – even with drawback of gluten-free bread. Tuna interspersed with the crunch of small diced red onion (oops, this definitely wasn’t an intolerance-friendly meal) and corn, the saltiness of capers and the freshness of dill was a treat once blanketed with melted miscellaneous cheese. Even though my melt was drizzled with what seemed like cayenne pepper, I sprayed two different kinds of hot sauce across it to add even more oomph and my runny nose was testament to the good time that was had. The rosemary tater tots were crisp and herbaceous and everything a good piece of fried potato should be, but Sookie La La was so generous with its side servings I was unable to finish all my tots. Mr WFYB was of course no help – sated as he was with his eggs and pancakes. 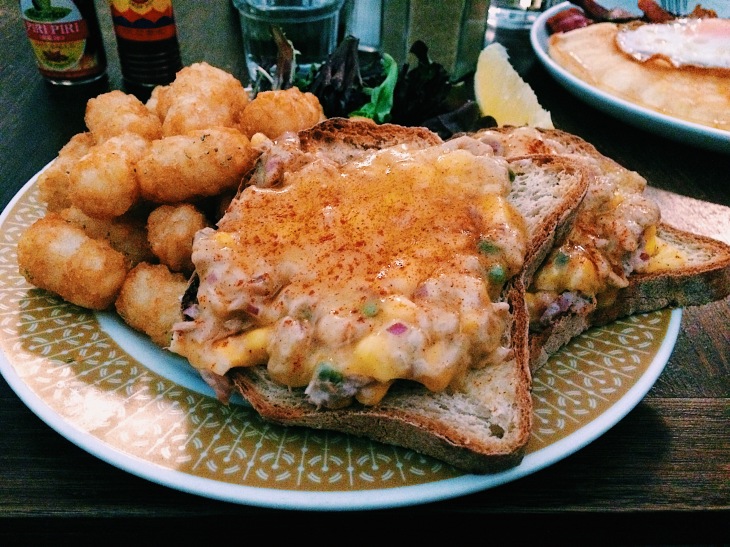 Sookie La La is a gem of a local and somewhere I will certainly be visiting again, especially now that I know I can bribe Mr WFYB with their blue heaven milkshake. What I would have ordered had I no intolerances is the mac and cheese with roast pumpkin, gruyere and caramelised onions with a rosemary pangrattato, but what I will be ordering the next time I visit is this: a basket of rosemary tater tots with a serve of Southern fried chicken tenders and maple chilli.

Sookie La La is open on Monday, Wednesday, Thursday and Friday from 7.30am to 5pm, and on Saturday and Sunday from 8am to 5pm.