What: Egyptian with a side of confusion

Who: Monemoiselle, The Doc, Rosé Doré and Hangover Queen

It’s been a while since I had a five-bloat meal that I’ve documented on this blog – the last one was at Tora Dumplings in July last year – so strap yourselves in for a delicious yet painful journey through the annals of new Egyptian place Pharaoh’s offerings.

Near as it is, I rarely venture to High Street, Northcote unless it’s to grab a lazy weeknight meal of salt and pepper tofu at the perennially packed Lâm Lâm. It’s a shame I don’t as High Street has gem upon gem – from pizzeria Pizza Meine Liebe and Israeli street food spot Tahina to Ethiopian restaurant Mesob and old school Italian joint Bar Nonno.

Relatively new to the eclectic strip is Egyptian restaurant Pharaoh, which sits where chocolate shop Coco Loco and Mexican restaurant Papasito used to be. The Doc suggested it and I was ever so thankful to her for doing so, fatigued as I am with having to suggest where we eat in nearly every other social circle that I’m in. Without a menu on Zomato or a website, Pharaoh was highly mysterious and I couldn’t do my usual thing of deciding what I wanted to eat there a week in advance.

Interestingly, Egyptian restaurateur Khaled Sherbini used to run both Coco Loco and Papasito but has decided, for the first time, to capitalise on the food of his cultural heritage – hence Pharaoh. Khaled was very much the patriarch of the restaurant – a soft-spoken waitstaff led us to our table and took our orders throughout the night, but Khaled was always lurking nearby for when she was unable to answer our questions about the highly disjointed menu or would occasionally wonder up to impart some knowledge about the provenance of our dishes.

Pharaoh was a welcome reprieve on the blustery cold evening that we visited, warm and inviting yet somehow devoid of the throngs of Northsiders who would typically frequent such an establishment. In fact, we were the only patrons in the restaurant for a good half hour before we were joined by a spate of couples and families. Why wasn’t this restaurant more packed?

A somewhat confusing menu may be the first reason. We were entrusted with a two-page menu – the first was divided into el mashwi (char-grilled meats) and atbaaq lahma (meat dishes) while the second had the heading of hafla (a feast to share) with set meal prices depending on your dietary requirements – $42 per person if you’re vegan, $48 if you’re vegetarian and $55 if you’re a meat eater – as well as a range of other listed dishes, including Pharaoh’s famed falafel fries i.e. falafries which I was dying to order.

After much deliberating, we decided to order a few dishes from the first page and a few from the second, only to be told that everything on the second page belonged to the set menu. Even the falafries! We didn’t want to spend that much per person on the set menu, and enquired if we could order dishes on the second page on an ala carte basis without having to pay for the set meal. Upon an intense discussion between Khaled and the waitstaff, we were told we could but upon more clarification, we learned that we couldn’t order the falafries by themselves and had to order them as part of an entrée platter. My feedback for Pharaoh would be that the menu be made clearer, because without the set meal dishes on the second page, there are only seven dishes that can be ordered, and it’s not clear that the falafries belong to a broader platter that must be ordered together.

In the end, we ordered two identical entrée platters, two meat dishes and a lentil, rice and macaroni bake called koshari, which had been getting rave reviews. I was loosely trying to follow my newly discovered histamine intolerance, but did a dismal job, as the eventual bloat score will attest to.

The entrée platters were a highlight, particularly the falafries – thin squiggly strips of crumbed dried fava beans (also known as broad beans) and dill. Said to be the original falafels, Egyptian falafels are called taameyya and taste distinct to the dried chickpea falafels that we’re used to eating in Melbourne. The falafries were moreish and addictive and I probably ate more than my allotted fifth.

I steered clear of the babaghanouj, a chargrilled smoky eggplant dip, because eggplant is on my new ‘foods that will cause you pain list’ as is tomato, which is why I avoided the gebna baladee, a dip with barrel-aged ewe’s milk feta, tomato and chilli. I did, however, really enjoy using the mini wholemeal pitas that were provided to scoop up the signature black tahini hummus and the busara, a fava bean puree with roasted onion (because I can eat onion now! Or so I thought). 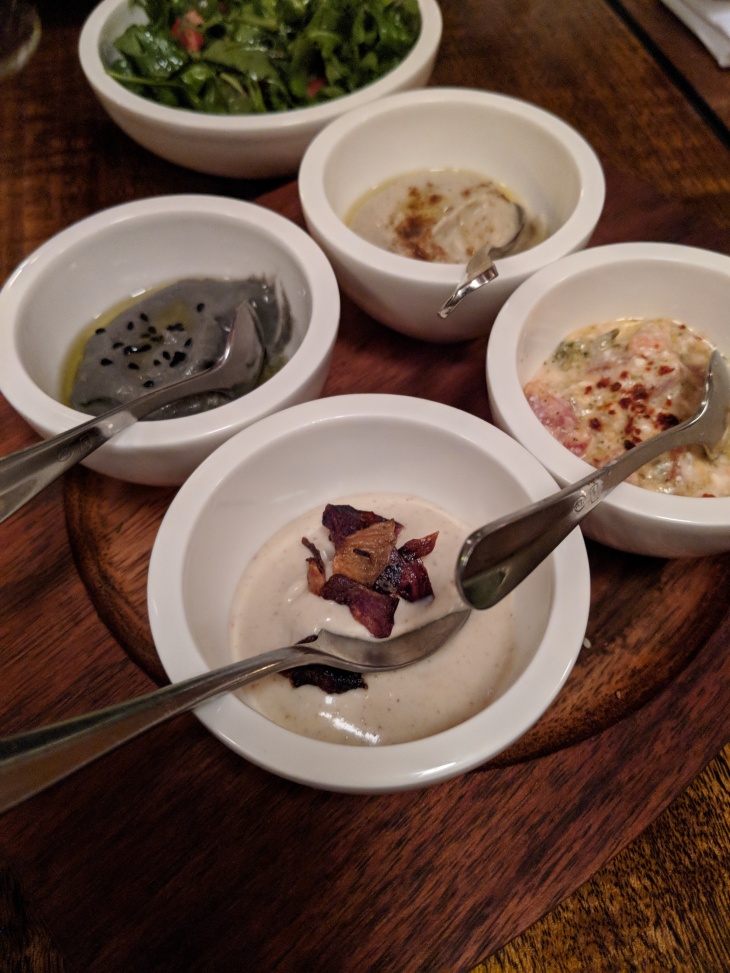 I don’t know why I bothered avoiding anything in the entrée platter because my resolve gradually weakened throughout the night and I ended up eating everything. I thought I could avoid the fire roasted tomato salsa in both the meat dishes, but they had already been mixed in. What would any “sensible” person do? Eat the dishes obviously and worry about the consequences after. 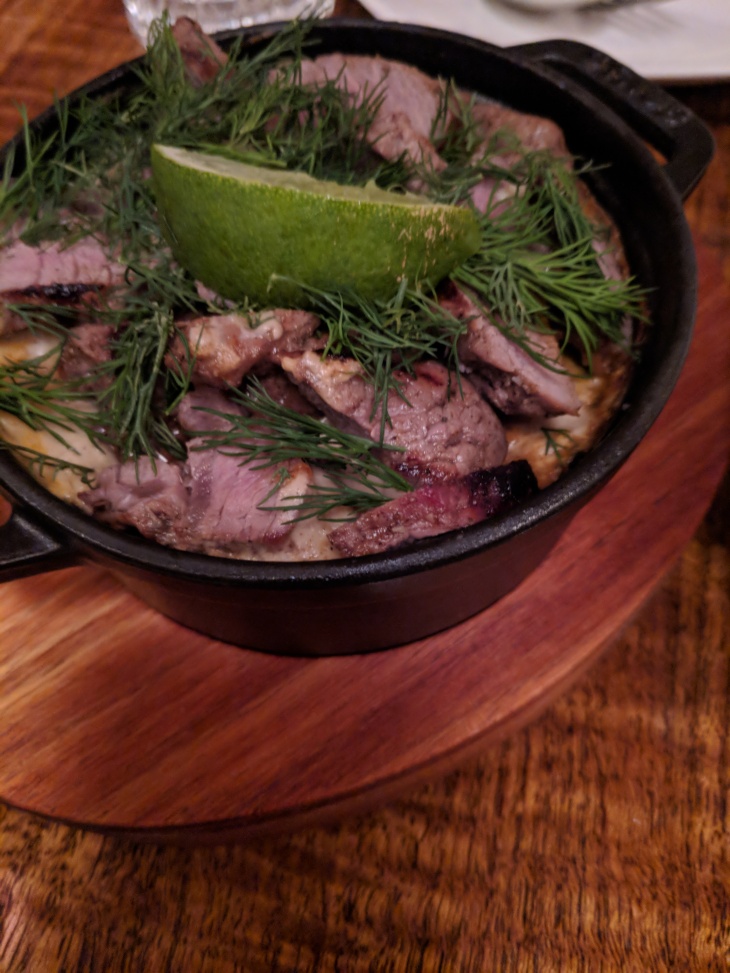 Khaled makes his own cashew milk on site, which imbued both the meat dishes with a creaminess that didn’t require me to pop two Lactofrees beforehand to enjoy them. The lahma bel roz comprised small pieces of chargrilled lamb steak fillet cooked in a fire roasted tomato salsa and baharat cashew yoghurt reduction. The lamb was rich and tender – this dish was a particular favourite of Rosé Doré’s. The serving of rice on the side was slightly paltry, though it was incredibly buttery and a complementary base to the lahma bel roz.

The infamous koshari was my favourite – beluga lentils and chickpeas were folded into the texturally delightful basmati rice and macaroni bake (the little crunchy bits of al dente pasta punctuated my every bite) with pureed tomato interspersed throughout and crispy shallots sprinkled on top. As I learned from my dietician soon after, shallots are out of bounds for me as we try to discover if I’m intolerant to both histamines and salicylates, but I didn’t know this at the time and ate them with the reckless abandon of something that has resisted shallots for the past five years. 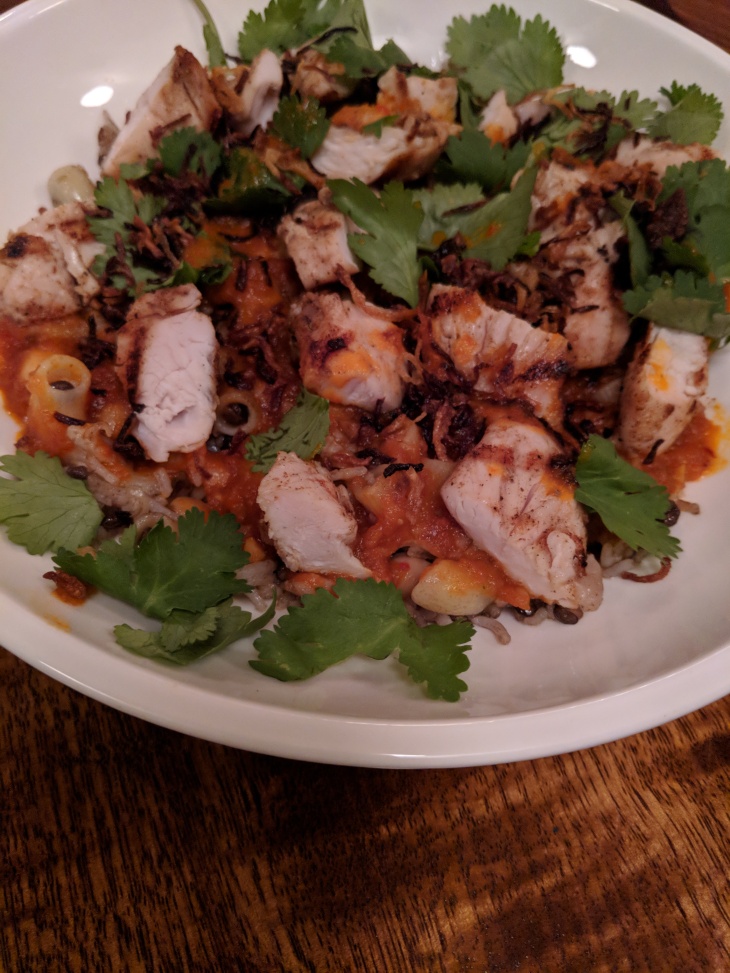 We’d initially asked for this dish to come with halloumi, which would have been sublime. Instead, the kitchen mixed up our order and delivered the chicken version to our table, which was immensely tasty, but the harissa-marinated chicken tenderloin was the hero in another dish we’d ordered – the ferakh bel kouskousy – which made for two dishes that tasted highly similar. In fact, I can’t recall much about the ferakh bel kouskousy, but trust it was good.

By this stage, everyone was pleasantly full save for me – I was far past the point of feeling comfortable and was well on my way to a five-bloat score. Must have been the excessive amounts of tomato, cashew cheese and shallots. But why stop there? I lobbied for all of us to get dessert, which is how we ended up with three desserts between the five of us.

Dessert was another confusing affair. On the initial two-page menu we’d received, a rice pudding and dark chocolate mousse were listed as the two options, but upon completing our meal, we received another dessert menu where the rice pudding had been replaced with a chocolate mousse, candied peanuts and honeyed banana crepe. As an avowed fan of rice, even in desserts, I enquired after the missing rice pudding and was told we could order it but everyone else wanted to try the other two so we decided to order all three desserts.

True to Khaled’s predilection for nut milk, the rice pudding had been cooked in cashew milk and topped with treacly roasted nuts. I loved this, although it wasn’t quite as sweet as the Greek equivalent risogalo that I’d tasted elsewhere.

The dark chocolate, cashew milk, agave and pomegranate balsamic chocolate mousse was smooth and velvety, but we found it slightly ridiculous that a small blob of goodness cost $17, particularly when there were multiple blobs of it on the crepe (I’ve zoomed into it to make it seem as though it was worth the $17). 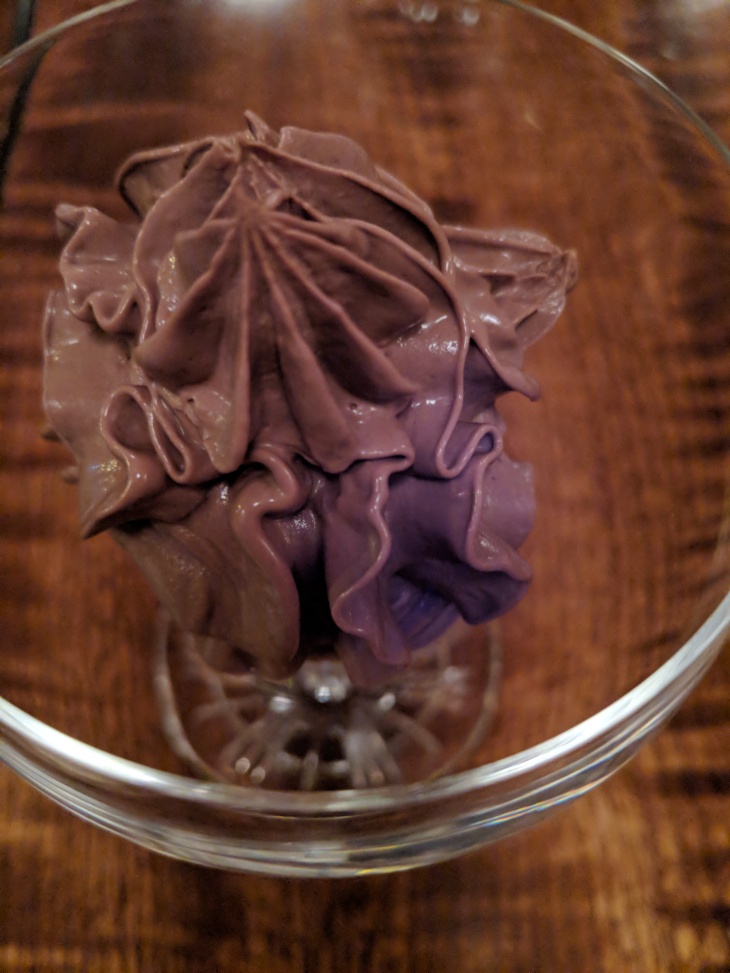 The crepe stole the show, but beware ordering it if you’re not a fan of banana because the banana factor was strong. I was glad there were five of us to share this, as it was incredibly rich and filling. The honeyed banana and chocolate mousse melted in our mouths, while the crisp crepe reminded me more of a dosa than a French crepe. I could felt my fart reserves building with each spoonful of this that I ate. 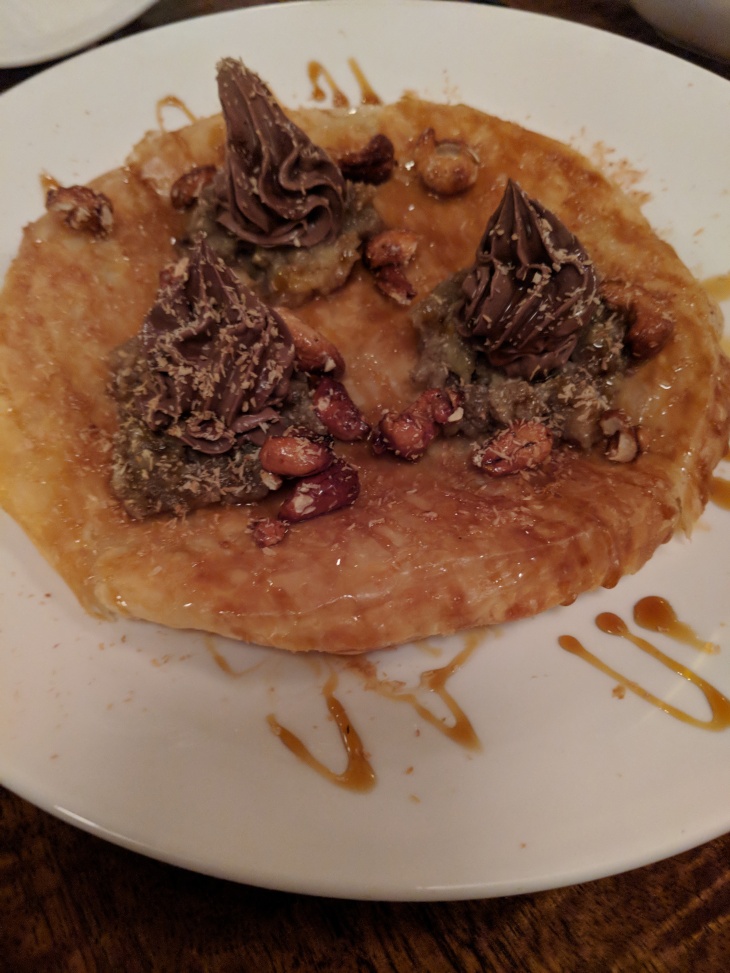 The bill eventually came up to around $50 per person, and we’d had drinks and three desserts to share, so I maintain this is a better value option than the set meal, particularly if you’re a meat eater.

The things I’m not supposed to eat on this new low-histamine diet – tomato, nut pastes, shallots, eggplant, chocolate, any sweets basically – were spread across every dish we had, and so I nursed my engorged tummy and crawled gingerly into bed to torture myself further with an episode of Handmaid’s Tale.

Apart from an easily misread menu and slightly uneven pricing, Pharaoh is well worth a visit and a delicious introduction to Egyptian food – go for for the falafries and koshari, stay for the chocolate mousse crepe.