What: A Sydney café in Melbourne

Who: Eco Warrior and Resident Photographer

Of all the themes to base a café around, Au79’s owners chose gold. Those au fait with the periodic table will immediately recognise that Au and 79 are the chemical symbol and atomic number for gold – with Au79 branding engraved on most things in the café, from the coffee cups to the coffee jug that the baristas use to steam the milk – while the rest of us will notice the gold signage embossed on the black brick building.

Greenery is a constant at Au79, whether it’s the wall-mounted foliage, the verdure dangling from the ceiling or the feature plant compositions that take centrestage on communal tables – so much so Broadsheet called it a “sprawling indoor botanical garden”. That, as well as the cafe’s fixation with a status symbol and positive affirmations, prompts Resident Photographer to remark that Au79 feels like something that has been transplanted from Sydney – so removed it is from the exposed brickwork and grungy chic feel that most Melbourne trendsetting cafes are known for these days.

Au79’s capacity to fit a small Indian wedding doesn’t prevent a substantial queue from forming outside the premises, but thankfully my friends are more punctual than me and have managed to snag a table to coincide with my very late appearance. I’ve also since learned that you can make bookings at Au79 to escape the queue, because this is what brunch in Melbourne has come to.

Known for its in-house coffee roastery, Au79’s coffee doesn’t disappoint. I want to tell you more about my almond latte’s earthy notes and floral hues, but all I can tell you is that it tastes smooth and creamy. 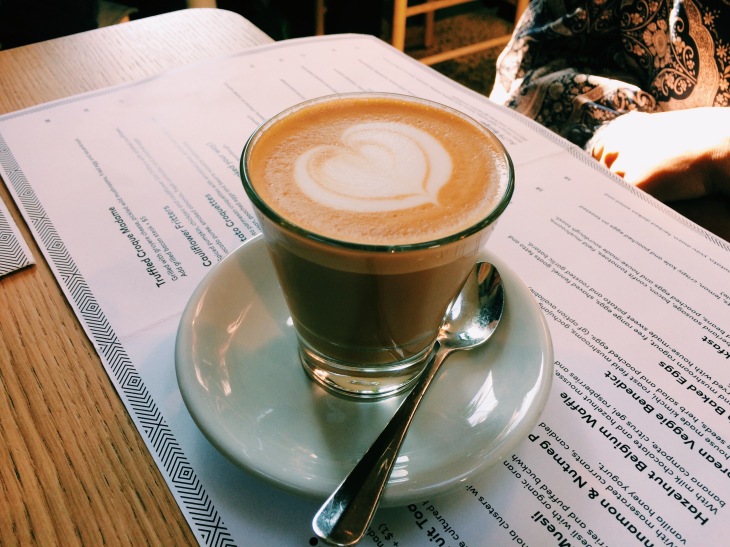 Feeling particularly off-colour after an Italian dinner the night before that involved me scoffing down a two-cheese and mushroom agnolotti, I decide to bother the waiter with my standard request of what dishes an onion and garlic-intolerant person can order. To my immense relief, he says the potato croquettes don’t have any onion and garlic, save for the traces of it that are in the accompanying beurre noisette hollandaise, which I request to be served on the side.

Known for my predilection for potatoes, I gasp with joy when my dish arrives – the potato parmesan croquette is substantial and everything you want out of a glorified version of a McDonalds hash brown. Sandwiched by two poached eggs and a bed of smashed peas, my dish is the perfect blend of creamy and fresh. The addition of brown butter in the hollandaise results in it being the richest hollandaise I’ve ever tasted, and though I judiciously dab a spoonful or two in it, I am glad it is on the side because my gallbladder-less body would have revolted had it blanketed my dish.

If my pre-meal ritual is stalking the menu online, Resident Photographer’s is looking up a café’s most popular dishes on Instagram. Tempted by the vegetarian Korean benedict, he eventually decides on the Au79 big breakfast, which has housemade Cumberland sausage, bacon, confit tomatoes, field mushrooms, potato hash, relish, baked beans, poached eggs and sourdough. Resident Photographer isn’t as wowed by his meal as I am by mine, though he is certainly full by the end of it. He says the individual elements, while tasty, are stock standard versions of what would usually appear on a big breakfast plate and is particularly critical of the relish, which he finds too sour. I am currently toying with the idea of changing his blog moniker to Relish Pedant. 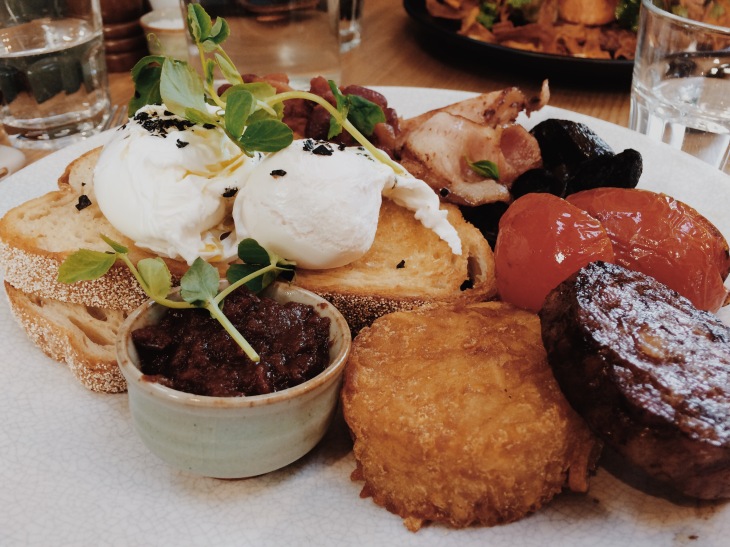 Eco Warrior, who commemorated the recent Japanese week on MasterChef by cooking a Japanese meal every night for dinner, predictably goes for the okonomiyaki with roasted sweet potato, yuzu mayo, a herbed daikon salad and sweet potato crisps. Reminiscent of bonito flakes, the sweet potato crisps cap off a dish of pleasingly orange hues. Eco Warrior enjoys the well-balanced flavours of his textured meal, and remarks that the addition of sweet potato lends a South American feel to the vegetarian dish, which traditionally includes some sort of meat or seafood component.

Following my intolerances means I should have escaped dining at Au79 consequence-free, but either I dabbed my croquette a few too many times into that brown butter hollandaise, or the agnolotti from the night prior was reminding me of my reckless choice, but I was reasonably bloated by the time the meal ended. So much so I couldn’t take advantage of Au79’s in-house bakery’s sweet treats, that range from éclairs and peanut butter opera cake to lamingtons.

Au79 is already doing a roaring trade and its menu is inventive enough for me to want to visit again. Whether I do or not in the perpetual land of new cafes is another question altogether.