This post is part of a new segment where I recreate the recipes of those around me. I am forever curious about the homecooked food my friends and family subsist on and nourish themselves with – what are their lazy day go-to meals? What do they turn to when they feel like making a splash in the kitchen? What is their definition of comfort food? I will explore these questions through my histamine-intolerant lens, but will include the original recipes for those who don’t get bloated off everything.

What: The South Asian answer to bolognese

I almost never cook the Indian food I grew up eating because a) I am deeply lazy and my mum’s methods of blending, grinding and dry roasting seem like too much work, and if you’re not willing to put in the effort, why even try? and b) it makes me deeply, deeply bloated. Most curries (or what we know to be “curries” – spruiking an old piece of mine here that interrogates this question) start with a base of onions and tomatoes, two ingredients bolded in dark red in the histamine handbook.

But when BoPo Warrior, who twitches at the slightest hint of body shaming, told me about her Aunty’s mutton keema recipe, I knew I had to try it. Keema is a South Asian dish with a specificity that exists in very opposition to the generic moniker “curry” – it’s a traditionally Mughal dish which features minced meat cooked with potatoes or peas or both in a heady aromatic concoction of star anise, cloves, cinnamon, curry powder and chilli powder. BoPo Warrior’s version uses minced mutton, but I substituted this with minced lamb, and it can be easily made with chicken mince or beef mince instead.

I grew up eating my mum’s version, which I loved, but was interested to try another family’s spin on it. Everyone seems to have a different way of cooking this versatile dish – some use yoghurt and prefer it as a mild dish, whereas others savour it for its spiciness. With its use of two different types of chillies, this recipe definitely veers towards the latter.

BoPo Warrior enjoyed her Aunty’s mutton keema so much she started watching over her shoulder whenever she cooked it and jotted down this recipe, which I’m now privileged enough to share with you all.

“This dish is the reason behind my love affair with mutton in Indian cuisine. I grew up in my Aunty’s home from the time I was a baby until I turned 10 or 11. Her cooking has always been out of this world, so one time a few years ago, I took a video of her making this dish. I’m proud to report that I’ve perfected it with my own special additions!”

I have equated keema to bolognese mainly due to its use of ground meat and various aromatics, but I could honestly see it working a treat tossed through pasta (and I’m evidently not the only one).

In case you’re wondering, it has both tomato and onion but only one tomato, which I was sure even my histamine-intolerant gut would be able to handle, and I omitted the onion completely. I reduced the bird’s eye chillies used to two, worrying about Mr Whatever Floats Your Bloat’s fragile constitution, but if I had my time again, I’d retain it as the three featured below – be mindful of how much spice you can tolerate and tweak accordingly. If you can obtain the curry powder and chilli powder from an Indian grocer, please do so – they’re highly versatile and can be used in many different curries, and Keen’s just won’t do here. I’ve hyperlinked to the powders BoPo Warrior used.

I served my keema alongside basmati rice and a tomato-free raita. I’ve included BoPo Warrior’s original instructions below, with my additional comments in italics.

Lamb keema (an original recipe by Sandiya Supramaniam)
Serves: 4–6 as an accompanying dish to rice / roti

In a wok, pour a few glugs of oil over medium-high heat. Once the oil is hot enough, throw in the cinnamon sticks, star anise, clove and fennel seeds. Roast them a little until you can smell the aromatics.

When the fennel seeds start popping, drop in the chopped onions (if using), the curry leaves and the diced chillies. Fry until the onions turn transparent.

Add the 2 heaped tablespoons of ginger and garlic paste and sauté for about 5 minutes.

Add the chopped tomatoes. Mash them as you cook them for 3 minutes.

Add the chopped potato cubes and a quarter of a cup of water. Cook all of it for about 5 minutes.

IMPORTANT: Cook this down until you can no longer smell the raw powders. You’ll know what this means when you are at the stage. It takes about 3–5 minutes.

Throw in the minced meat. Mix well and cook. Add salt to taste.

You can add a little water at this point, but make sure the water is HOT, not cool tap water, as the mutton cooks better in hot water according to my Aunty. (I added about a cup of water that I’d boiled at the beginning.) 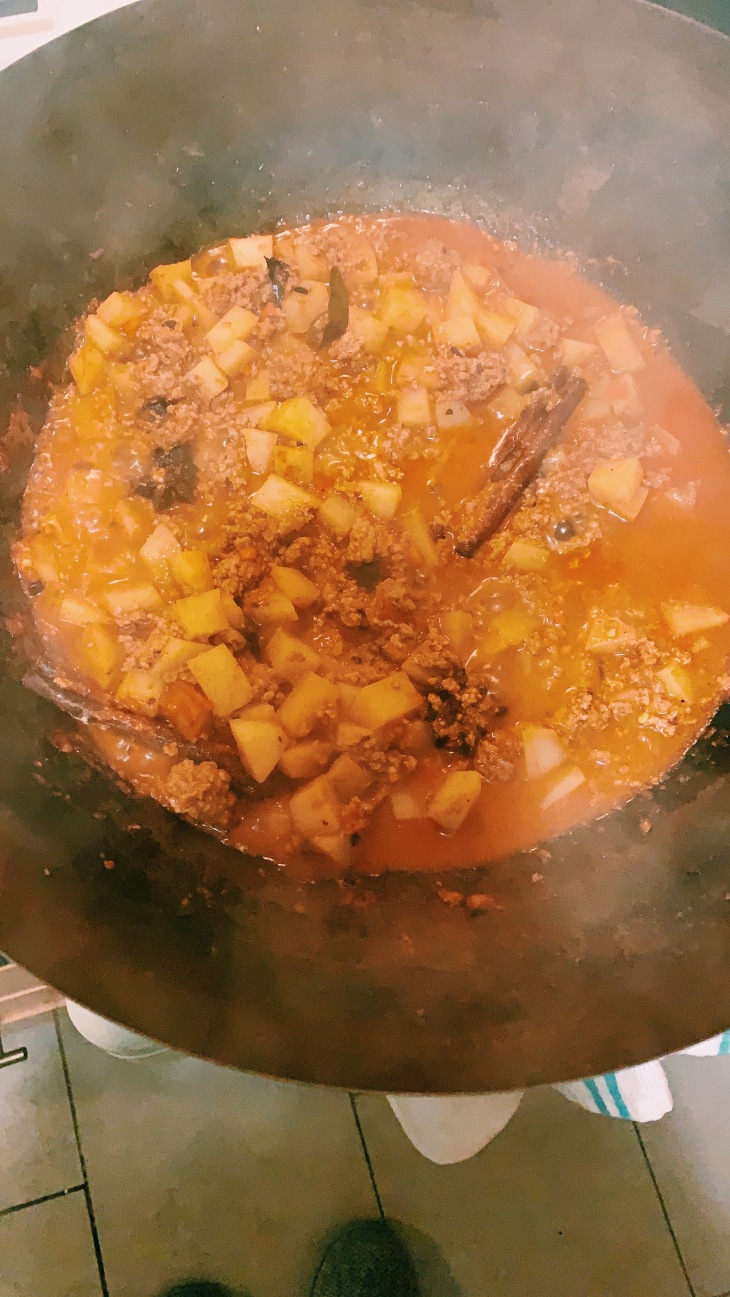 On medium-low heat, cover the wok and let everything cook, stirring every two minutes or so for about 10 minutes, or until your meat and potatoes are cooked. (My potatoes took far longer to cook – I added extra water periodically for 30 minutes until my potatoes were soft.)

Be sure to taste the meat at every interval to check the spice level. If it needs to be spicier, smash a bird’s eye chilli (or two) with the back of a knife and throw it in.

When the meat and potatoes are cooked, the dish will be relatively dry with very little gravy. (I also fished out all the cinnamon sticks, star anise and cloves at this stage because nothing ruins a dish for me like biting on a spice.) 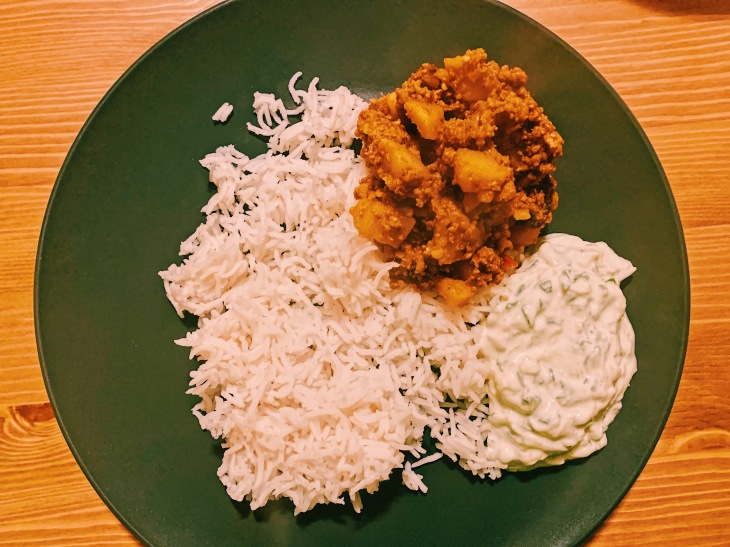