What: Pizza pockets on crack

Banish all thoughts of McCain’s cheese and bacon pizza pockets (as satisfying as they can be) because Melbourne chef Guy Grossi has opened up a casual eatery called Pezzo, which specialises in pizza pockets that house ingredients decidedly more gourmet than homebrand cheese and bacon – think calamari, polpette (meatballs) and cotoletta (veal breaded cutlet).

At Pezzo (pronounced pet-so), 48-hour fermented pizza dough is baked, halved and stuffed with a selection of fresh ingredients. This may sound familiar to you if you’ve been to Ombra Salumi Bar, the menu of which contained these very same pizza pockets, though not to the same extent that they are found in Pezzo.

Tucked away at the ‘Paris’ end of Flinders Lane with Garden State and Terra Rossa among its neighbours, Pezzo more likely than not caters to a healthy lunchtime crowd of office drones on weekdays. On the Sunday that we visited however, it was relatively empty and undisturbed. Clusters of tightly arranged tables make up the airy and bright space, with the loud and dulcet tones of Spice Girls blaring from their sound system at the relatively early hour of 11am. Service is friendly and earnest; waitstaff come up to your table to answer any queries you may have, but ordering is done at the front counter.

With my desire to completely breach my intolerances offset by an aching gut after I scoffed down Kettle chilli chips (best packet chips imho) the night before, I decided to enquire as to which pezzo had the least amount of onion and garlic in it. I was told that though the accompanying white sauce had a smidgen of garlic in it, the calamari and zucchini pezzo would be safest. I requested a gluten-free version of it, but note that this isn’t a gluten-free meal as the calamari is lightly battered in wheat flour.

Apart from the six pezzos on the regular menu and an additional special that was a grilled chicken pezzo with herb mayo, you can choose from a selection of snacks, ranging from arancini to spinach and ricotta panzerotti, and sides that include rosemary and garlic chips as well as a medley of salads. I decided to go for the solo pezzo on this occasion, so as to not upset my stomach.

Slow Eater is a proponent of the slow food movement, but not in a way that preserves the ecosystem of traditional and regional cuisine, but rather in the sheer amount of time it takes her to finish her meal – she once took four and a half hours to finish a seven-course meal we’d both committed to. She felt like something lighter and went for the vegetarian parma pezzo filled with parmigiana, eggplant, tomato and basil. Whitest Chilli Fiend, who is perhaps the sole white person in my social circle who can truly tolerate spice, went for the polpette, tomato and provolone pezzo.

My heart sank when my pezzo arrived. The pizza pocket looked too fluffy and perfect to be gluten-free, and I guessed that my waiter must have misunderstood my desire to have the calamari pezzo in a gluten-free bun, despite the fact the calamari couldn’t be made gluten-free. I am nothing if non-confrontational, so I happily started eating my pezzo, reassuring myself that I’d tried everything I could to have an intolerance-friendly meal. 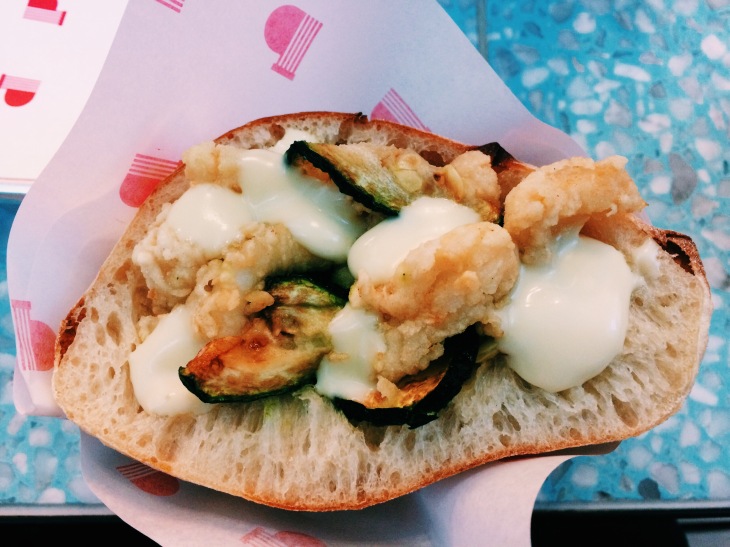 The fermented dough was truly the best feature of the meal, and this is coming from a person who isn’t usually too fussed about bread. The pocket was light and pillowy but with enough structural integrity to withhold its fillings. The dollops of white sauce drizzled atop the combination of springy calamari and crisp zucchini was akin to a creamy mayo, and I was glad to see the fillings were stuffed right down to the bottom of the pizza pocket. If anything, this pezzo could have used a fresh sprig of mint or parsley to override the richness of the ingredients, but I was a fan of its home-style decadence.

True to her nature, Slow Eater was full after her first two mouthfuls and laboured over her pezzo for the next hour and a half. This isn’t to say she didn’t enjoy it – it was a lot heavier than she expected, but she enjoyed the flavours. 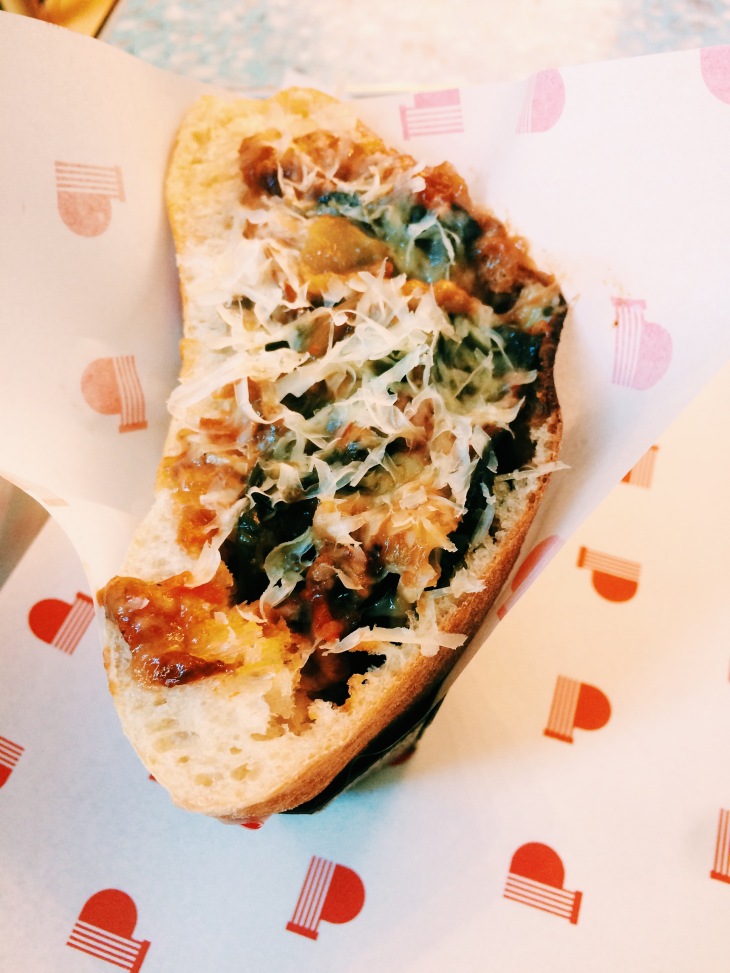 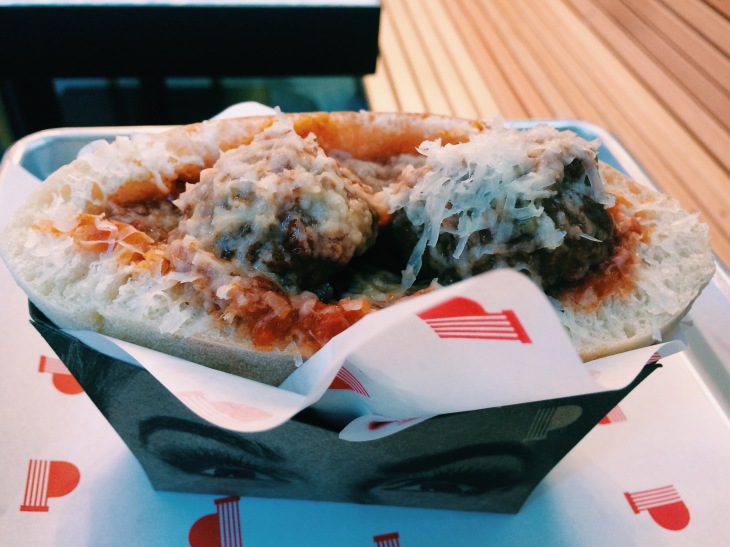 I was neither like Slow Eater nor Whitest Chilli Fiend – I was satisfied after my pezzo and found it to be just the right size, although who knows how much of this was affected by my two-level bloat. I didn’t feel as sick as I originally thought I would – whether this is because of the fermented pizza dough that was used or sheer good luck is anyone’s guess.

The pezzos are reasonably priced, with my amply filling calamari one the most expensive at $14.90, and the parma one the cheapest at $10.90. With coffee, sweets as well as alcoholic shakes and beverages on the menu, Pezzo could either be a casual lunch stopover or a quick dinner option. If I were to go again and properly commit to breaching my intolerances, I’d get the lamb shoulder, rosemary potatoes, parsley and onion pezzo and call it a day after.

Pezzo is open from 7am to 11pm Monday to Friday and from 11am to 11pm Saturday to Sunday.

@anatoliatantuni is great for vegetarians, vegans and, much to my relief, people who don’t tolerate wheat very well. They have a wide selection of flatbread wraps, gozlemes, kebabs and burgers but I got this chicken tantuni on rice with tabbouleh and it was 💯. Tantuni is a speciality from the south of Turkey where diced meat is cooked in a shallow, large frying pan called a sac. It only resulted in ONE BLOAT – link to this week’s blog post in bio 👀
Paella is maybe one of my top five favourite foods and visiting Preston Market is something I’ve NEVER done if you can believe it so I’m glad I got a chance to combine the two with @penny.eva. We shared this half seafood, half chorizo and chicken paella and it was to-die-for; the crunched up bits of rice spiced with garlic, tomatoes and saffron were the highlight – I honestly would’ve probably been as happy to just eat a vat of the rice by itself. Swipe right to see the best chicken taco from @cornutopiatacos that I also had after devouring my half of this paella. Surprisingly only ONE BLOAT from ingesting a lot of onions and tomatoes
Parents’ birthdays aren’t the time to follow my intolerances, so I indulged and shared in on @forkandfingersav’s butter chicken lasagne in honour of my mum doing yet another lap around the sun 🥳 I’ve blogged about Fork and Fingers before – do a search on WFYB to read my full review – and found this just as impressive as when I first had it. The flavours were well-balanced, the sheets al dente and sturdy, the three-cheese bechamel creamy and complementary to the morsels of spiced butter chicken. I felt fine immediately after having this – and several other dishes, ranging from beetroot paneer tikka to lamb seekh kebab – but the THREE BLOATS made themselves known later in the night
I’ve felt awful all day – my stomach has been in knots and my bowels have been completely haywire (sorry – TMI, but you know what you’re getting when you follow someone with food intolerances!!) – and I’m beginning to realise it may have nothing to do with what I’m eating, and everything to do with the suffocating haze blanketing Melbourne at the moment and the sick collective despair we’re all feeling. I’m still trying my best to follow my intolerances so my body doesn’t feel any worse than it already does and I tried again last night at @musashiramenbar – I knew my gut couldn’t tolerate ramen but I ordered rice with unagi and it came with a side of miso soup. I still felt terrible after at THREE BLOATS but I would’ve 100% felt worse if I indulged in the sweet, sweet nectar that is a tonkatsu broth
ONE BLOAT from this broccoli, garlic and chilli pasta with gluten-free casarecce at @shop_225. Shop 225 is the first Coeliac Australia-accredited pizzeria in the country – they have two separate kitchens – and they make vegan equivalents of nearly every meaty pasta dish, from bologneses to carbonaras, and have housemade vegan versions of stracciatella, scamorza, mozzarella and cream cheese. They’re basically very good (this isn’t a sponsored post – I just love them!!) and they’re the subject of this week’s blog post – link to post in bio 👀
HALF A BLOAT from this spaghetti di mare at @bontempo_pizzeria, substituted with gluten-free penne. It didn’t come with this many chilli flakes, but as everyone knows – I’m a fiend for heat! Nearly every other pasta on Bon Tempo’s menu was a napoli sauce one and seeing I can’t eat tomato, it was between this and a creamy chicken and avocado one but I’m glad I chose this – the garlicky olive oil pooled at the bottom of the bowl, coating each tube of pasta, and the seafood was mostly fresh (the smaller prawns used tasted like frozen prawns and I wasn’t the biggest fan). Bon Tempo give you the choice or ordering an entree or main size and for $4 more I went for the main but it’s always a gamble – I hate wasting food as much as I hate being hungry. In this case, it mostly paid off – I finished everything but a few tubes of pasta. At this stage, I can’t tell if I’m bloated or just very full; time will tell. UPDATE: time spoke and I was actually bloated!! I had pretty bad heartburn, which I suspect was from a combination of eating past being full and eating such an oily pasta
×
%d bloggers like this: