What: Brunch fare designed for the ‘gram

My eyes couldn’t help but glaze over mentions of granola bowls, eggs benedict and smashed avo replicated across the menus of Melbourne’s cafés in my brunch research for this weekend, until I stumbled across Project281 Cafe.

A Japanese- and Korean-inspired café situated on Albert Street off Sydney Road, Project281 is an expansive concrete warehouse plant oasis with exposed concrete drainage pipes, black steel lacework chandeliers and impressive swathes of greenery that has reinvented but not entirely forgotten its old printers’ workshop roots. Although we showed up at the prime brunch time of 10.30am, we only had to wait a few minutes to be seated. Project281 has an indoor area split across two floors – we were seated on the mezzanine.

It was a balmy 15 degrees when we visited – and I’m not being sarcastic, it was actually warm – so the first floor was a little too warm for our liking. Additional skylights were put into the café to allow the indoor plants and garden beds to grow, but aspirations to be like a greenhouse has resulted in Project281 feeling as hot as one too. I’m not sure if they crank up the air-conditioning during summer, but it’s something to keep in mind if you live in a body that easily overheats as I do.

Between the earthy green matcha buns, the lurid red beetroot buns and the thick cut charcoal sourdough used in their burgers and sandwiches, Project281’s dishes are designed for the ‘gram, which is not to say they’re without substance, but it does mean their prices were slightly inflated – religious chai drinkers Conflicted Pescatarian and Oxford Brosé baulked that the standard prana chai cost $7 instead of $5, though it did come with a few cinnamon sticks that you poured your chai through. 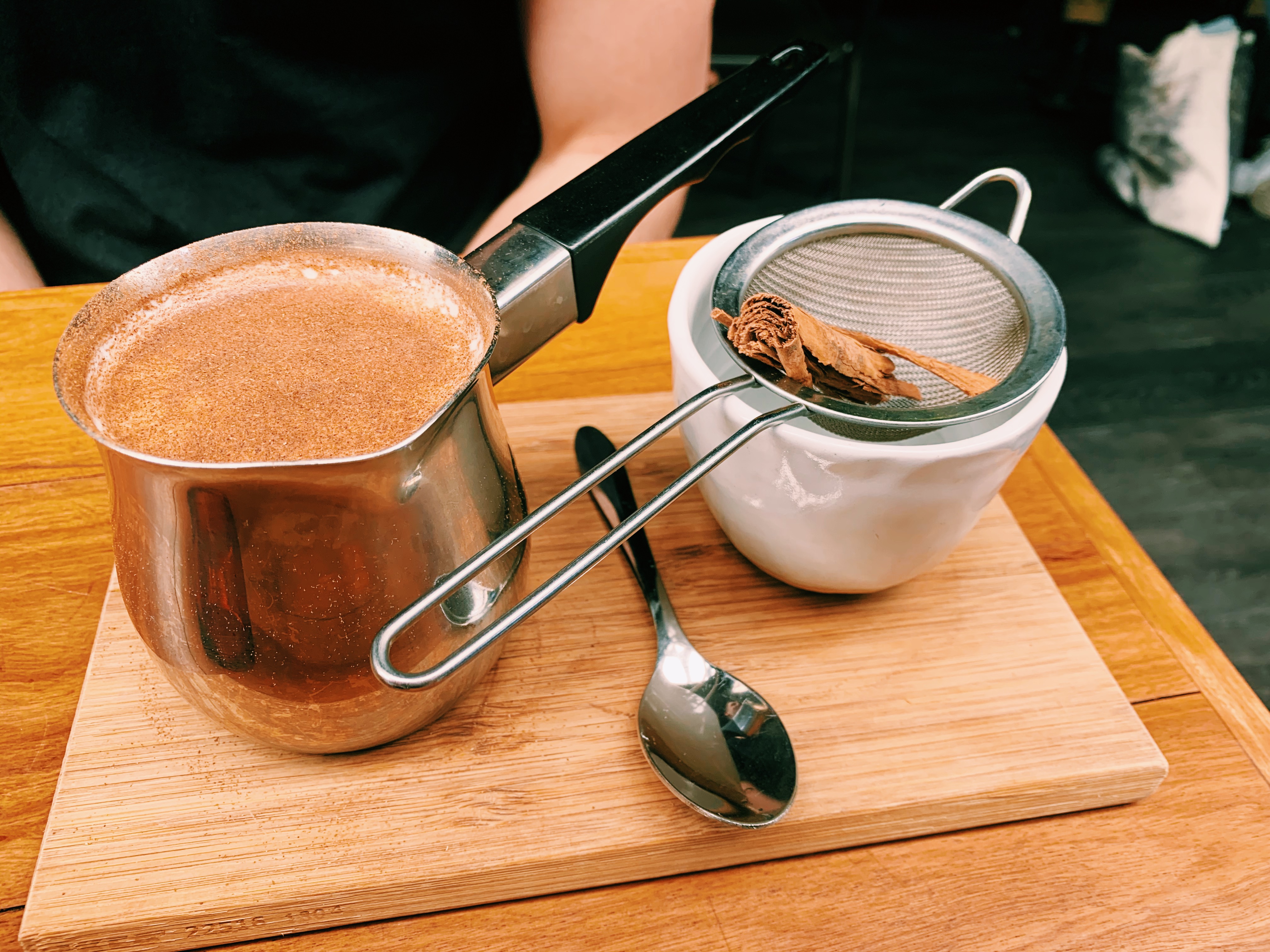 Oxford Brosé ordered an English breakfast tea to stem his hangover, but found the style-over-substance cup difficult to hold. 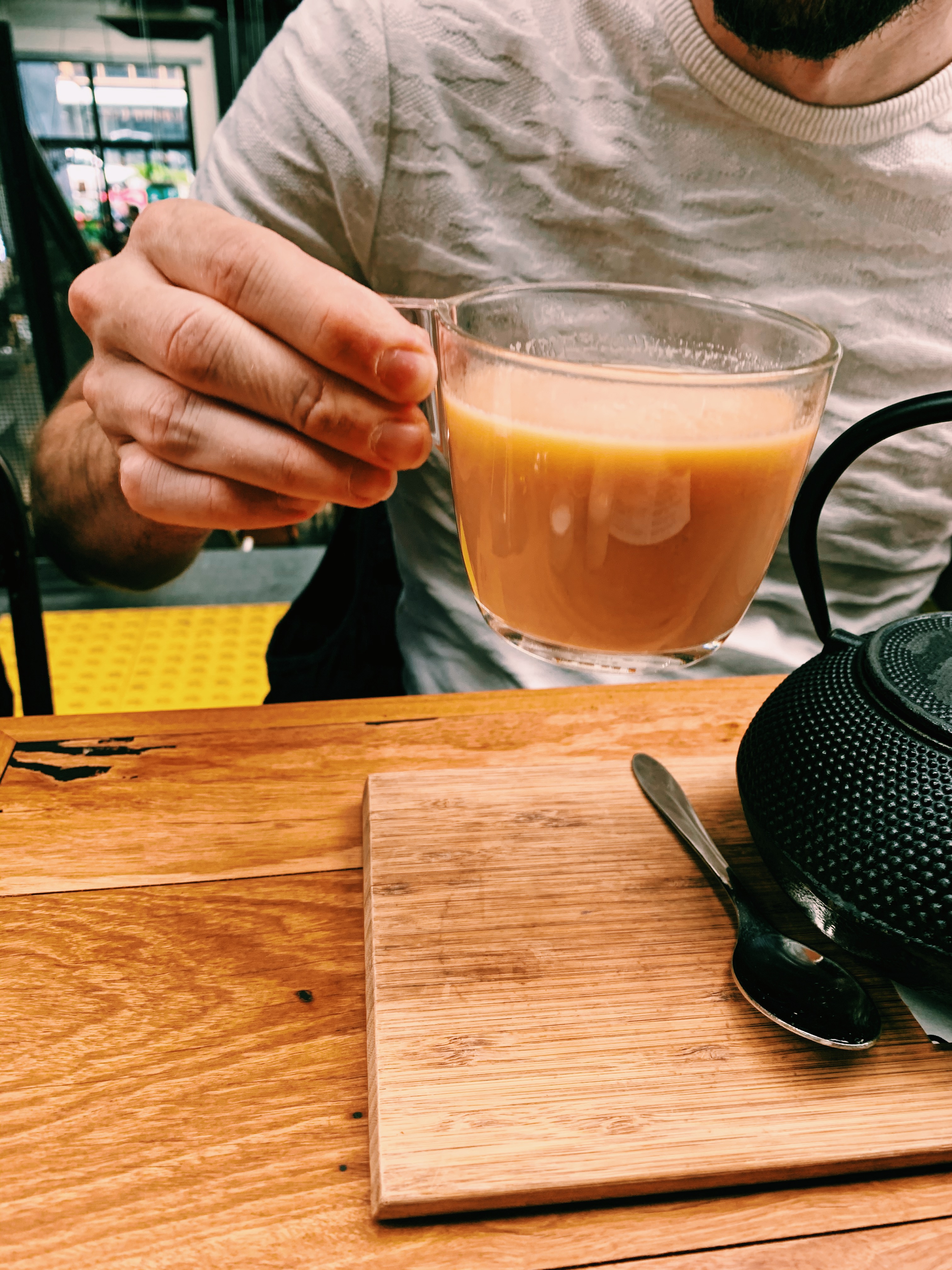 Expensive chais aside, Project281 has good coffee. It roasts its own beans onsite under the masthead Founder Coffee Co and offers the alternative of coconut milk and oat milk alongside the usual soy milk for both the lactose-intolerant and vegan cohort. 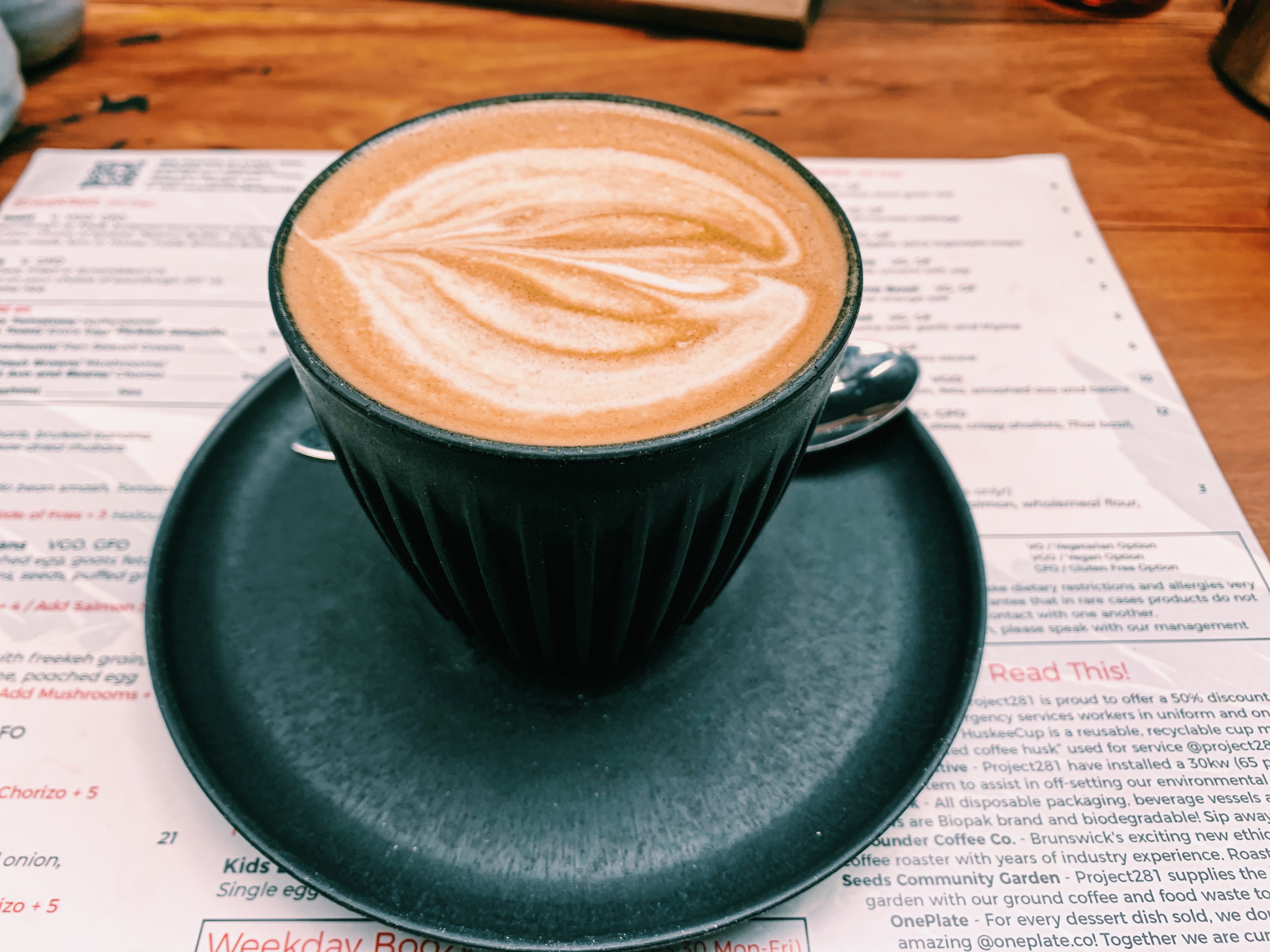 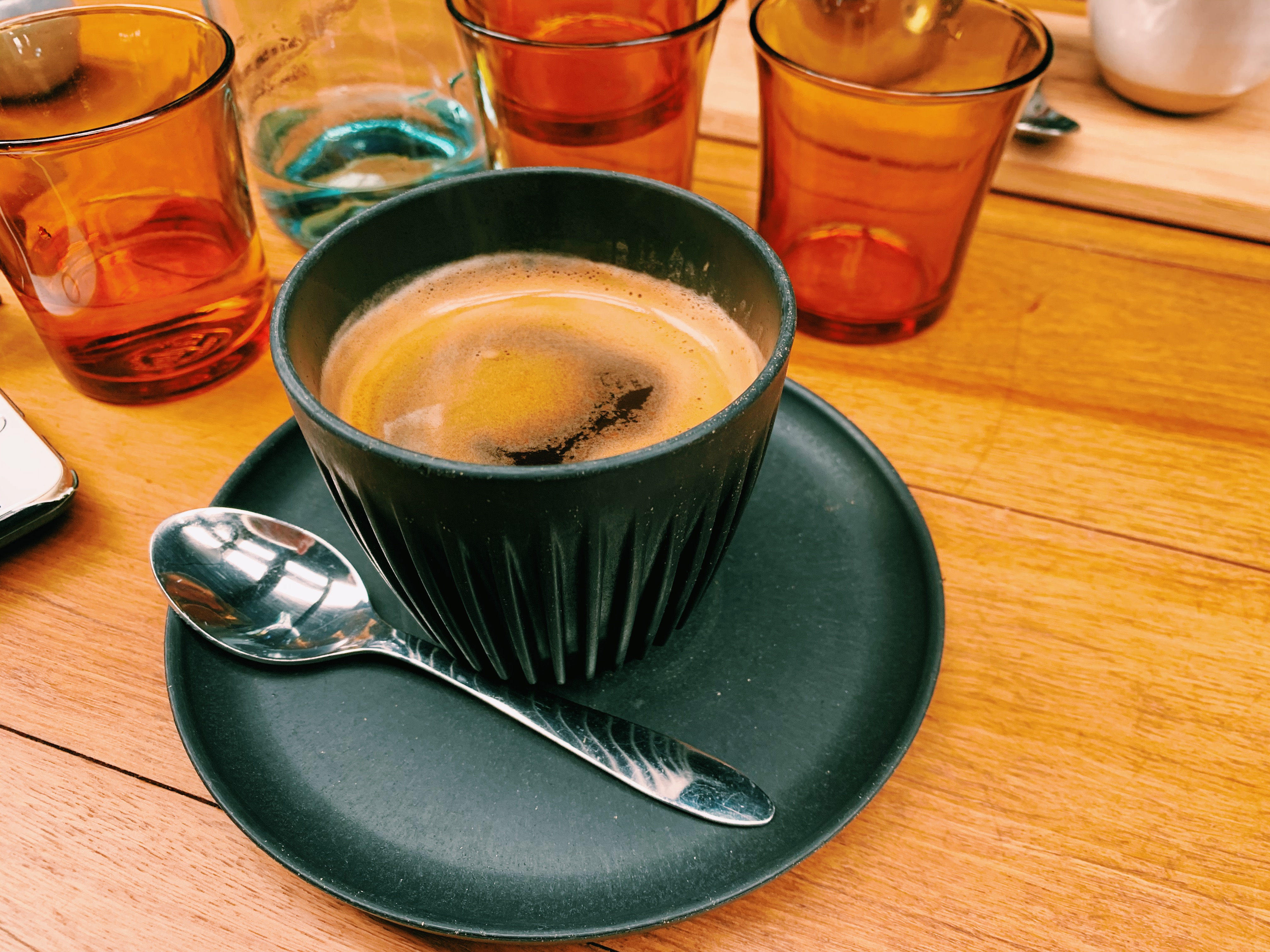 Project281 also has an incredibly plant-friendly menu – most dishes have a VO and VGO next to them to symbolise they can be turned into vegetarian or vegan equivalents. As part of this sustainability focus, Project281 also serves all its coffee in recycled Huskee Cups, powers its operations with solar panels, incorporates herbs from its indoor garden into dishes and composts its coffee onsite.

Project281 had two signature dishes on their menu – the octopus hash ($23) and the prawn okonomiyaki ($24) – and although Resident Photographer pointed out that signature dishes are typically the most expensive dishes on the menu (he wasn’t wrong), I went with the octopus hash because it sounded interesting, but mostly because it came with a hash brown and had the word ‘spicy’ in it – I am nothing if not a sucker for deep-fried potato and chilli.

If you’re someone who likes to kid yourself that you’re not eating animals when you are eating animals, this dish isn’t for you. Tendrils of octopus tentacles curled themselves around a poached egg, a purple burst of pickled cabbage and a seaweed herb salad. The octopus itself was caramelised and sweet from the chargrill, with fluffy and slightly chewy insides. The red pepper smear that the chargrilled octopus sat on was spicy and quite rich – I mostly steered clear of this because capsicum is high in histamines, but did enjoy the occasional dab. The house pickled cabbage went some way to cutting through the indulgent nature of the dish, but it was subtle – I would’ve preferred something more acidic and fresher. I did enjoy this dish but couldn’t shake off the pangs of guilt I felt – octopuses are incredibly smart, but like other omnivores, I kid myself that I’m not eating octopus when I eat it concealed in dishes like takoyaki. 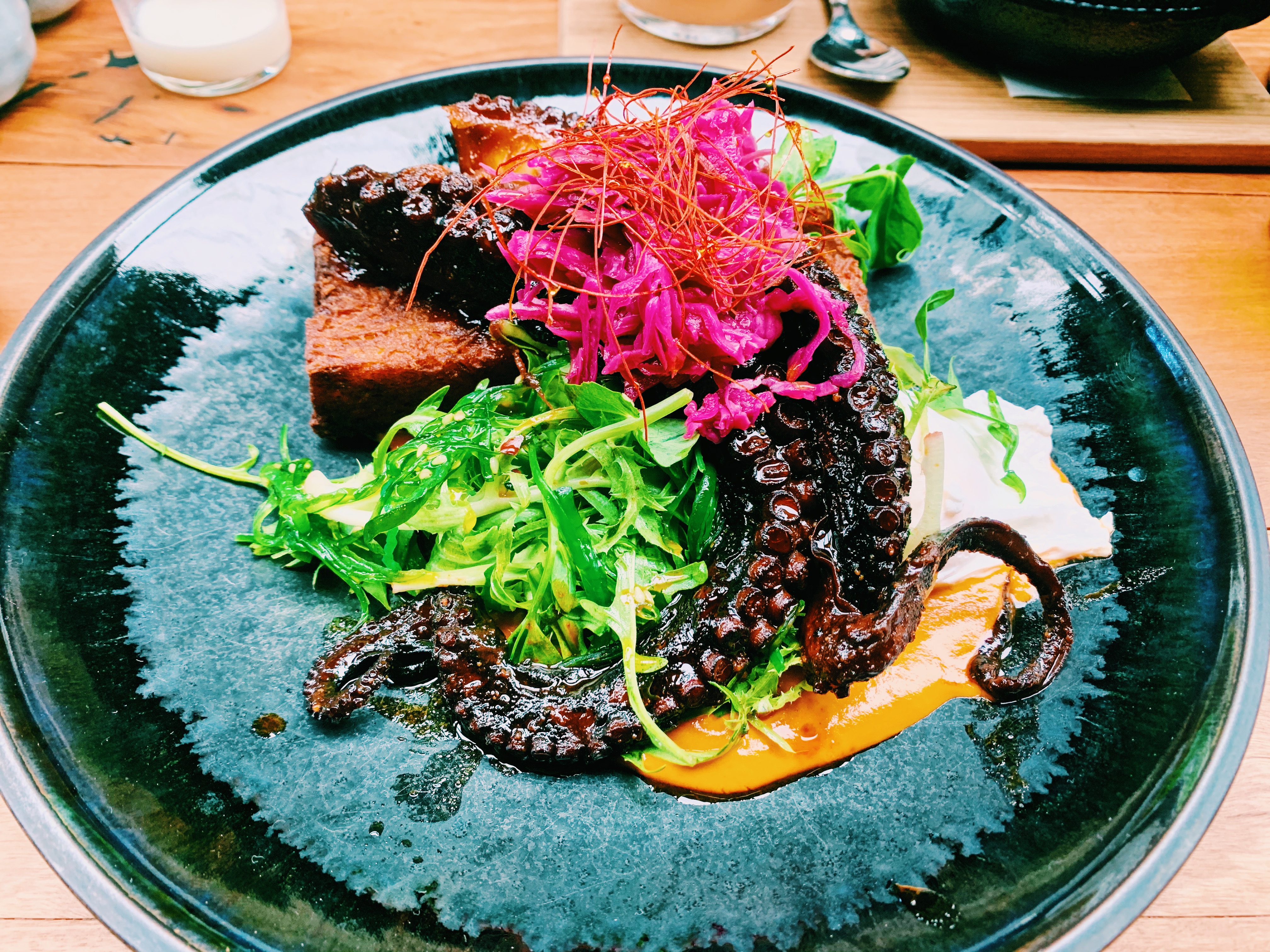 Oxford Brosé leaned into the hype and ordered the thick cut charcoal sourdough giant pork sandwich ($21), which featured crumbed pork, apple slaw, pickled cabbage and barbecue sauce. Oxford Brosé thought the sweetness of the apple slaw complemented the crumbed pork perfectly, while his initial worry that the crumbed pork would be either too greasy or too dry was alleviated as soon as he bit into it. 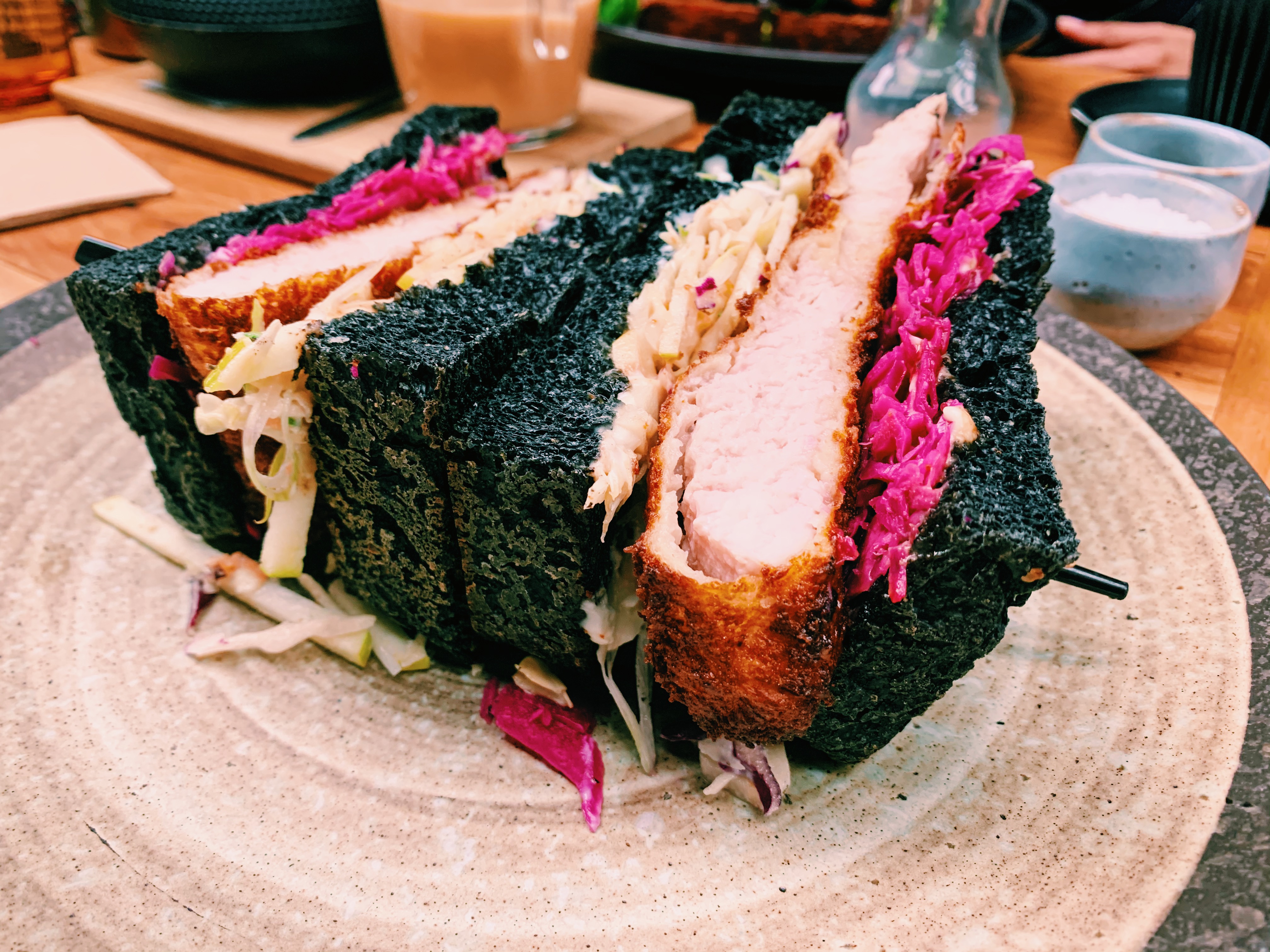 Resident Photographer and Conflicted Pescatarian chose from the all-day breakfast menu, ordering the truffle and hash scramble ($20) and the halloumi and pea fritters ($19) respectively. Resident Photographer enjoyed his scramble but remarked that there weren’t enough eggs used, hazarding a guess that only 1.5 eggs were scrambled. 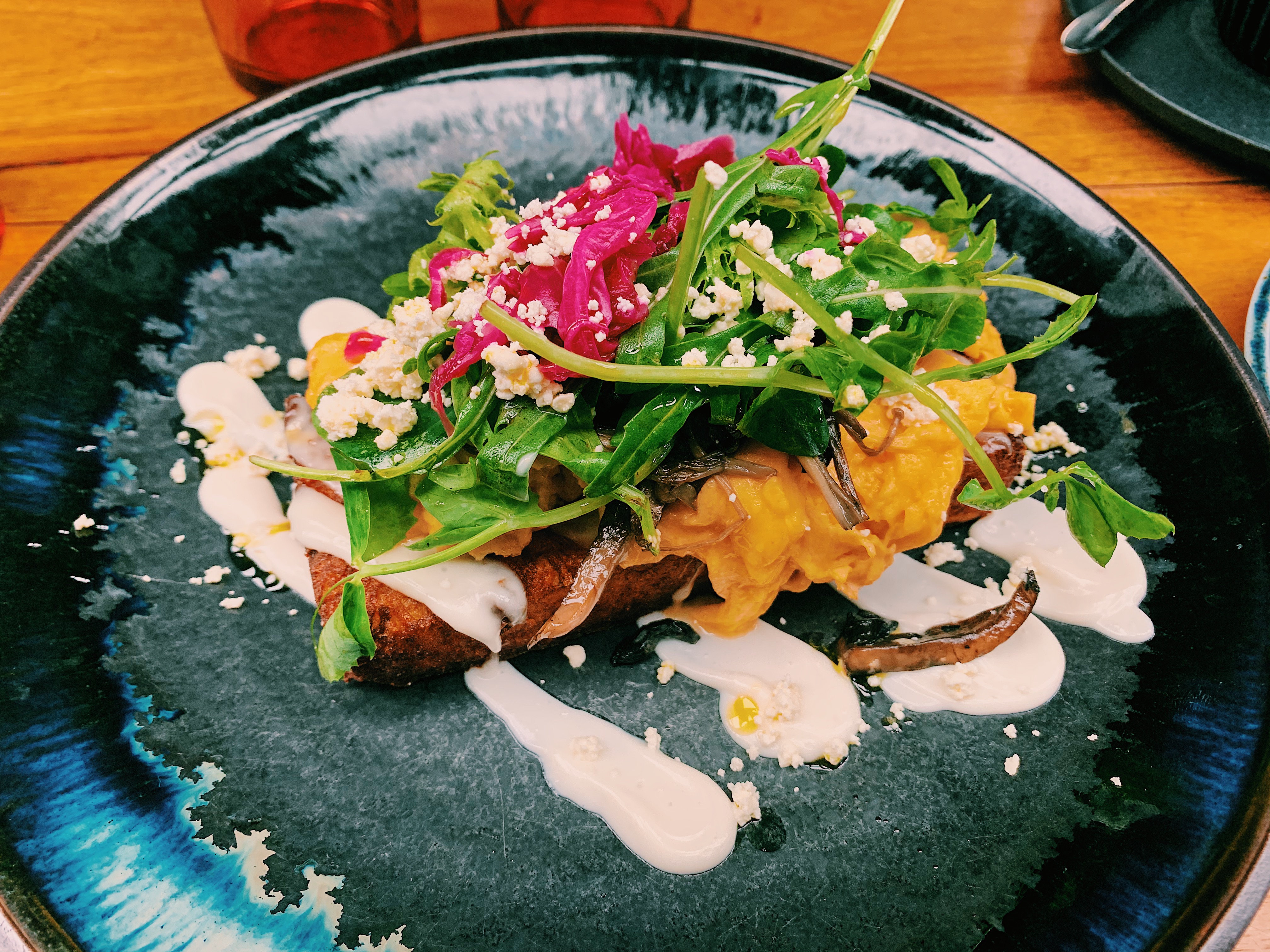 Conflicted Pescatarian enjoyed his halloumi, pea and mint fritters which came with a freekeh salad, poached egg, labne and a side of two tiny battered chunks of halloumi. Both thought their dishes were a touch overpriced given their size. 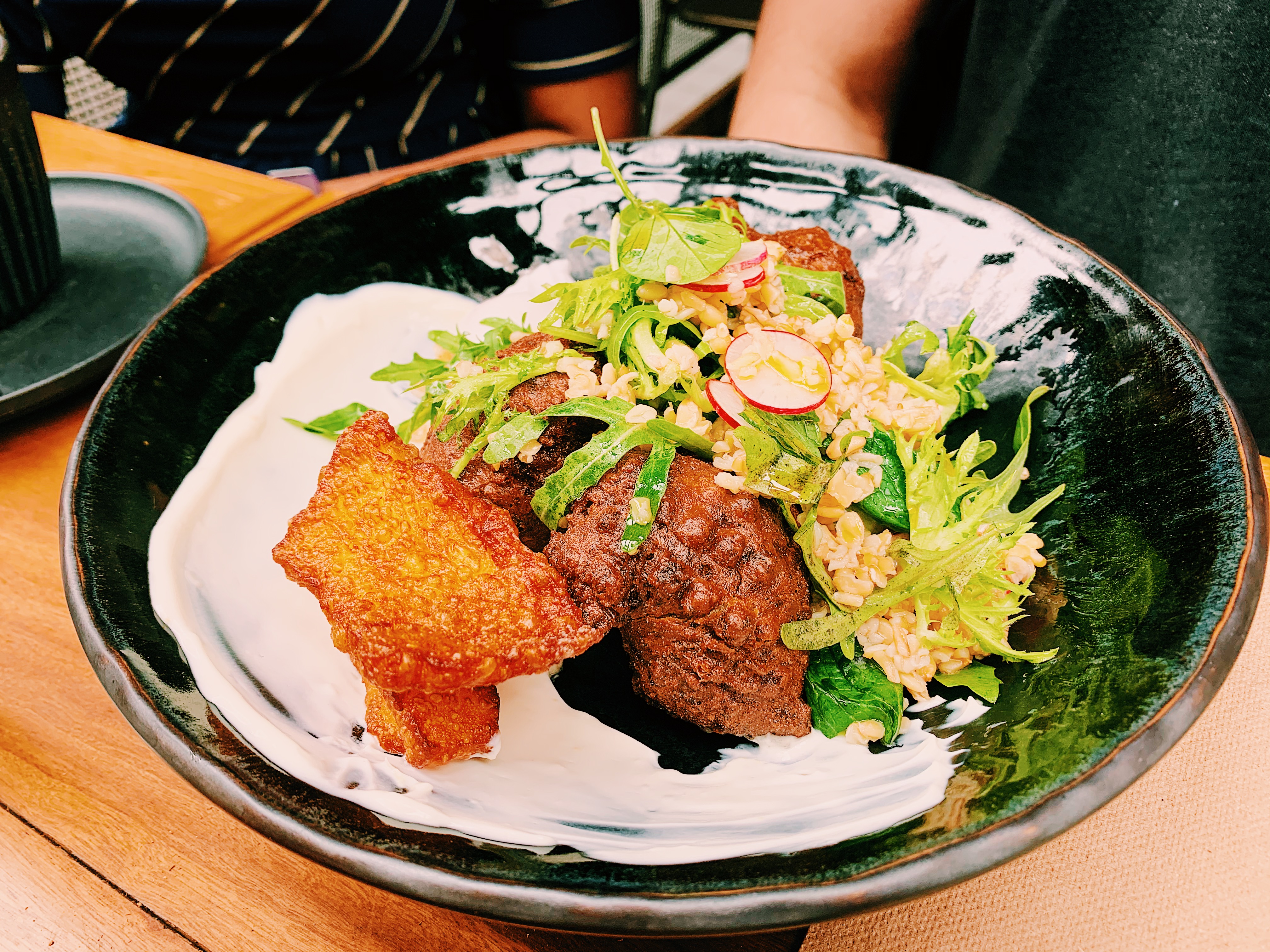 Project281 is a stunning café to while away the hours – even on a busy Saturday morning, we never felt any pressure to leave despite having finished our food and coffees within an hour. I was lucky to escape with only one bloat after my brush with the red pepper smear, but I don’t know if I’ll revisit a second time – while the menu is interesting enough, I’d much rather pay Ima Project Café a visit when I’m hankering for a Japanese breakfast.

Project281 Cafe is open Monday to Friday from 7am to 4pm and Saturday to Sunday from 8am to 4pm.