What: Heaven for FODMAP-intolerant vegans

The first time, I visited with Thirsty Vegan after attending a literary event in the city. Potato Vegan, who subsists on a plant-free diet of Lord of the Fries, and Accidental Vegan, who is always mistaken for a vegan despite her omnivorous diet, joined us but neither of them ate.

Nothing on Origin Tales’ menu contains onion and garlic, so it’s perfect for FODMAP sufferers. Apart from serving up Malaysian-inspired classics like satay, mee goreng and roti john, Origin Tales also plates up vegan renditions of loaded cheese fries and a variety of burgers containing facon, tempeh, hash browns and fuggets. I’ve heard great things about the ‘double decker’ burger that contains two patties of tempeh and hash brown interlaced with veggies and satay sauce but I had my sights set elsewhere.

I was hankering for Origin Tales’ Hainanese chicken rice, where crispy mock chicken is served with aromatic rice and a mixed salad, and their char kway teow with crispy mock char siu. Thirsty Vegan warned me that the Hainanese chicken rice is often out of stock when she visits, but thankfully, there were a few portions left when we went. We also ordered a serve of popcorn chicken i.e. bite-sized breaded chunks of soy (not as appetising-sounding) to share as an entrée.

The popcorn chicken was exactly like the fake nuggets i.e. fuggets (strictly my term – you won’t find it on any menu) I remember ordering at CBD Buddhist temple / vegan restaurant Fo Guang Yuan (which has since closed down – RIP). They were crisp and generously salted – the perfect pre-meal snack.

The mock chicken in Origin Tales’ Hainanese chicken rice, unlike the poached chicken in the original dish, were dark brown strips of mock soy meat. These were chewy and flavour-filled, recalling the texture and taste of real chicken, but the unsung hero of this dish was the aromatic ginger-and-garlic-infused rice – similar to the chicken stock-soaked rice served in the meat version of this dish. The accompanying chilli sauce had notes of sour and spicy in it – another nod to the distinct chilli paste that is served alongside Hainanese chicken rice. I really enjoyed this. 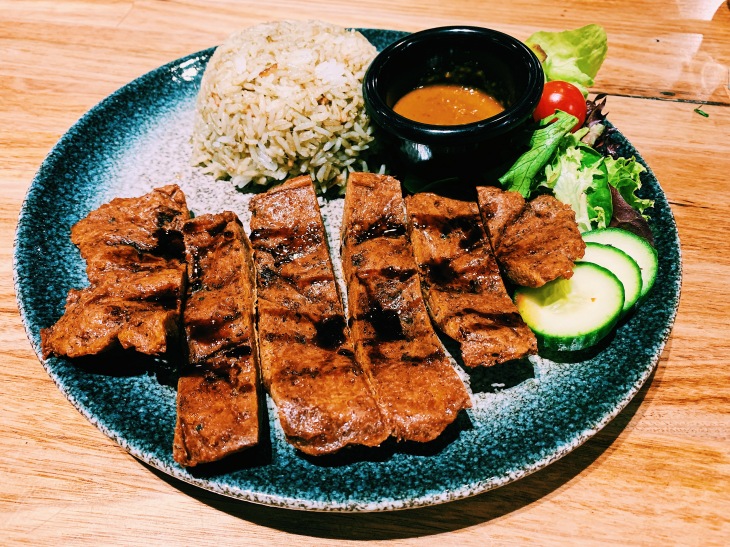 Disappointingly however, the Aunty who’s at the helm of Origin Tales told us she’d accidentally served our plate of char kway teow to another table, and asked if we would mind having their sizzling hotplate noodles instead. Thirsty Vegan looked at me uncertainly, and gently acquiesced because the aunty looked so distressed and because Thirsty Vegan is a nice person. I won’t lie – I was slightly disappointed. The sizzling noodles were nice enough but a) they weren’t mind-blowingly good and b) they were egg noodles, so not histamine-friendly because they’re made of wheat.

I relayed my predicament to Sand Pirate Penguin, who immediately demanded that I visit again with her so we could try Origin Tales’ char kway teow. Unable to resist a food invitation and unwilling to blog about the restaurant without trying one of their highly touted dishes, I visited Origin Tales the following week.

This time, we ordered rather differently – Sand Pirate Penguin, who is on first-name basis with the Aunty because she visits Origin Tales every Thursday without fail, insisted that we ordered the stuffed flat bread as an entrée. We also ordered the char kway teow that we came specifically for and the sambal fish, an off-menu item that the aunty was trialing with customers, alongside a serve of steamed rice.

If I wasn’t intolerant to everything in the stuffed bread, I too would be at Origin Tales every week to order it. Curry-spiced chunks of soy (similar in texture to lamb), potatoes, carrots and pea were sandwiched in thin, flaky roti – producing an explosion of flavours upon every bite. This was fake meat in its finest form – please order this if you’re ever at Origin Tales.

The char kway teow was thankfully delivered to the right table (our table) this time, and it was worth returning for. A combination of oil-slicked strands of egg noodles and rice noodles with the delightful charred quality (i.e. wok hei, or breath of the wok) of being cooked over high heat was pleasingly apparent. The chunks of tofu and fake char siew had thoroughly absorbed the dark soy and garlicky notes of the dish, while the mushroom was an untraditional addition, but which added some welcome freshness.

The sambal soy fish had a disconcertingly similar appearance and taste to real fish and I absolutely loved it. The sambal, while pleasantly piquant and sour, wasn’t spicy enough for Sand Pirate Penguin and me – we relayed our feedback to the Aunty who was receptive. Unfortunately, this dish came with two high-histamine vegetables – capsicum and tomatoes – which was a sure sign this wasn’t going to end well.

By this stage, my bloat had reached uncomfortable heights and I was struggling to sit upright in my brand new, very tight Dejour jeans. But that didn’t mean I was going to say no to Sand Pirate Penguin’s suggestion that we order an ice coffee. Ice coffees usually strike fear in my heart because no number of Lacteeze pills can counter the ill effects of milk and ice cream, but this vegan version suited me just fine. In terms of symptoms, however, the ice coffee not only exacerbated my nausea and cramps, but also made me more alert to my discomfort.

Despite the after-effects, I am a huge fan of The Origin Tales. Their Malaysian dishes rendered in intolerant-friendly (if you’re not histamine-intolerant, that is) and vegan renditions hit all the right notes, and it’s impossible not to fall in love with the soft-spoken, conscientious Aunty at the centre of it. Seeing it’s not far at all from me, I plan to visit again sometime soon – knowing my toilet is only a hop, skip and jump away if things go south.

The Origin Tales is open from 10.30am to 9pm Tuesday to Sunday.