What: Italian heaven for vegans and FODMAPers alike

When Thirsty Vegan first told me about Maccaroni Osteria Italiana, I was overjoyed because as anyone who knows me will attest, I am #teampasta4lyf. Only upon my usual pre-meal menu stalking activities did I realise there were entirely separate menus for fructose-intolerant people and vegans respectively i.e. what is this heaven and why had I never heard of it?

If there’s one thing I love more than not being bloated, it’s fake meat so I perused the extensive vegan menu with interest. The antipasti menu included vegan meatballs, salt and pepper vegan calamari and vegan arancini, while the mains menu featured a vegan gnocchi bolognese, cannelloni with vegan béchamel and the most intriguing vegan scaloppine.

The FODMAP menu was slightly less extensive, but no less exciting. Between three gluten, onion and garlic-free pasta options and five meat mains, I was spoilt for choice.

Thirsty Vegan went for what I would have ordered, if I were vegan and not intolerant to everything – the casarecce with tomato, fried eggplant, vegan swordfish and mint – while I stuck with my predilection for pasta and went for the gluten-free fettucine with (real) king prawns, cherry tomato and parsley. We decided this wasn’t enough food, and ordered a side of hot chips (which wasn’t on the FODMAP menu, so was potentially battered in heavenly wheat flour) but YOLO.

The rolled and twisted casarecce with a groove down the middle has to be my absolute favourite type of pasta (refer to the best breakfast casarecce pasta that I ever had), so it was with deep-seated longing that I watched Thirsty Vegan eat her highly generous serving of pasta. I helped myself to a forkful and it was incredibly tasty – the vegan swordfish tasted suspiciously fishy, but had the consistency of tofu and was coated in a mildly spicy marinade, while the caramelised fried eggplant that was interlaced in amongst the al dente tubes of casarecce resulted in a explosion of heady flavours. Thirsty Vegan was particularly excited by the side plate of shredded vegan cheese that she proceeded to sprinkle over her pasta. Vegans – run, don’t walk to this place.

I would be lying if I said I wasn’t slightly disappointed when my dish arrived – Thirsty Vegan’s plate was heaped with a mountain of pasta, while my portion was markedly smaller. Any reservations I had were eliminated, however, once I took my first forkful. The gluten-free fettuccine tasted anything but gluten-free i.e. it tasted good, which is becoming increasingly common with the sophisticated variations of gluten-free pasta available, and the prawns were cooked to perfection and had managed to absorb all the piquancy and hints of chilli in the sauce that had been stirred through the pasta. I had to refrain from polishing off this plate of pasta in record time and savoured every bite. The best part, apart from the sheer tastiness of this dish, was the fact that I wouldn’t feel sick after. Not one little bit. 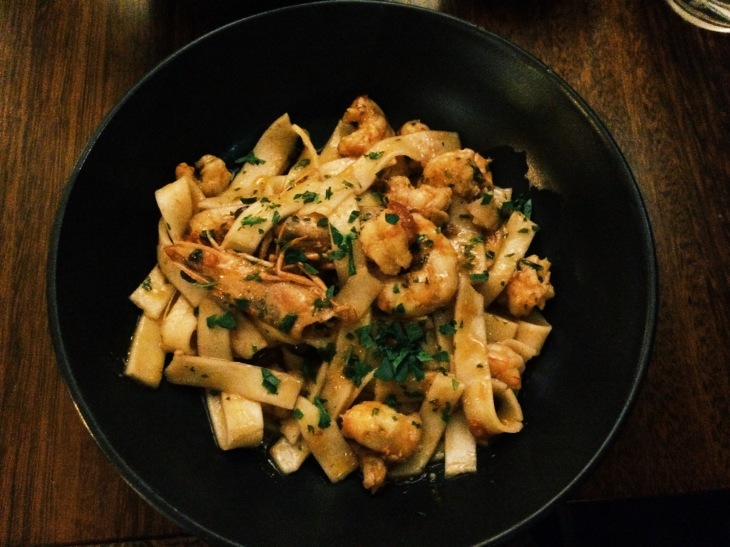 At $24 and $30, our dishes weren’t exactly cheap, but Thirsty Vegan’s was a sizeable portion for a reasonable price, and mine reflected the inclusion of fresh seafood.

The chips may have been overkill for poor Thirsty Vegan who didn’t expect her plate of pasta to be so generous, but I attacked them with the enthusiasm of someone who was still hungry.

Although Maccaroni Osteria Italiana’s thoughtfulness when catering to its vegan and FODMAP-intolerant patrons extended to its dessert menu, we weren’t able to fit anything else in.

I will be back to sample other intolerant-friendly options at Maccaroni Osteria Italiana if I’m not too tempted by the plethora of fake meat options.